Last Saturday, “Northern Kentucky’s Promise” sponsored a conference in Covington on reducing dropouts in our public schools. While there were a number of interesting presentations and discussions, one discussion that really stood out in my mind came from Michael Carter, the Interim Senior Vice President of Sinclair Community College, which is in Dayton, Ohio.

Mr. Carter and his college have been extremely active in dropout recovery efforts in Dayton, and the effort is clearly paying off. Carter mentioned that the dropout rate for schools in the Dayton area used to be 26 percent. That has now been cut in half.

A notable part of the process that brought about this remarkable change was the introduction of specialized charter schools, which are legal in Ohio.

Initially, Carter says, the regular public schools fought the creation of these charters. However, once it was explained that regular schools would not be charged with low attendance and with dropouts if the students were to enter the special charter schools, the regular education community started to see the light.

1) The Business Community – They recognized the problem and invested $3.5 million to help solve it.

2) County Government – they began to see the light once it was pointed out that about 70 cents of every dollar they were spending went to either incarceration or to welfare. (While Carter didn’t mention it, there is lots of information available that dropouts account for a healthy percentage of the people involved in jails and welfare). Now, the dropout effort that Carter is involved in gets $500,000 a year from the county.

3) Community Partners – This involves a really broad group of organizations from Easter Seals to social services. They provide a huge network of supports ranging all the way from showing teen moms how to properly secure their baby in a child seat, which the networks provide, to work clothes.

4) Educational Partners – Significantly, this included higher education as well as the K to 12 community.

Overall, Mr. Carter provided some very interesting information in his short presentation, and we are going to see if we can meet with him to learn more about the exciting effort to reduce dropouts in Dayton.

Critics like to paint the TEA party as a racist movement. But here’s one black pastor who says the TEA party’s message is one that appeals to all Americans, including his community.

Once again, the Advance Kentucky program to improve Advanced Placement (AP) course participation and performance in Kentucky’s high schools has produced some really impressive results. This program, which I have written about before, features many innovations such as very careful and thorough training of AP teachers along with merit pay for those teachers and rewards for students. AdvanceKY, as it bills itself, is raising the bar for performance in Kentucky.

The 28 high schools that participated in the AdvanceKY program in the 2009-10 school term (listed below) accounted for an astounding 43 percent of ALL the increases in AP passing scores (scores of 3 or higher) in Kentucky high schools statewide.

Considering that Kentucky had 225 high schools in this school year that reported scores from ACT testing, this means that just 12 percent of Kentucky’s high schools produced 43 percent of all the improvement statewide. That’s remarkable. 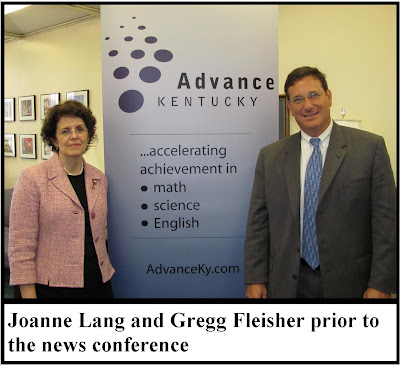 But, there was a lot more good news in the news conference hosted by AdvanceKY head Joanne Lang and Gregg Fleisher, the National AP Director at the National Math and Science Initiative. Mr. Fleisher’s organization assisted the formation of AdvanceKY with funding and other support.

A few highlights from the news conference include:

• Thanks in large measure to AdvanceKY schools, Kentucky ranked 4th in the Nation in percent increase in AP scores of 3 or more in the math, science and English test areas (17.5%) from 2009 to 2010.

• In the first group of schools to participate in AdvanceKY, those schools in “Cohort 1,” the increase in AP Math, Science and English exams scored 3 or higher for minority students rose an astonishing 825 percent between 2009 and 2010.

• Thanks to the AdvanceKY schools, Kentucky surpassed the U.S. rate for minorities (blacks and Hispanics) scoring 3 or more in the math, science and English areas. 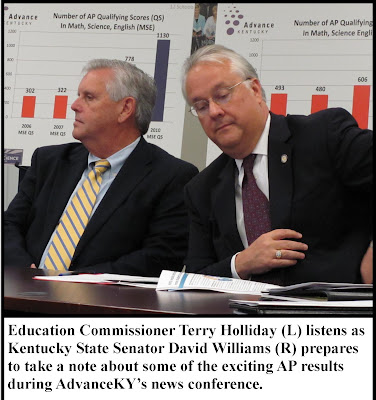 There were a lot of worthwhile comments from state leaders such as State Senator David Williams, Education Secretary Joe Meyer and Kentucky Commissioner of Education Terry Holliday, and I’ll cover those in future blogs.

But, the lead honors rightly go to Ms. Lang and Mr. Fleisher’s organizations for bringing their superbly performing program to Kentucky.

You can find more details about the AdvanceKY 2010 AP performance here.

And, here is a list of the schools that turned in such remarkable performance on the AP last year. 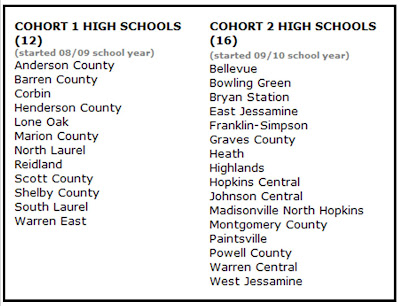 Jim Waters, vice president of policy and communications, will speak to the Kentucky Patriots at 1 p.m. Saturday at The Inn on Broadway in Lexington. He will also speak at a rally – along with U.S. Senate candidate Rand Paul in Shepherdsville at 4 p.m. The event will be held at the VFW Post.

Trigg County school board refuses to jump on tax-raising bandwagon

Not all school boards are jumping on the tax-raising bandwagon.

The Trigg County School Board recently declined to raise property taxes, citing the county’s struggling economy. This is a vast change from recent years in which the school board has typically raised the tax by 4 percent each year, the maximum amount allowed by state law without a voter referendum.

But economic reality has a way of messing up tax-and-spend fantasies.

Superintendent Travis Hamby says the district could really use the money. What administrator wouldn’t say that? But give Trigg County school board members credit for putting the interests of their community ahead of a revenue grab.

We wonder if Jefferson County Public Schools and other districts that have thumbed their collective noses at taxpayers while ignoring citizens’ pleas to contain taxes are paying attention to the fiscal responsibility shown in Trigg County.

We bet taxpayers who vote in elections for school board members are.