As I mentioned in an earlier blog, back in 2008 four Jefferson County Elementary Schools were in the worst NCLB performance Category – Tier 5. They are:

These schools all failed consistently to make Adequate Yearly Progress (AYP) for at least six years by 2008.

So, what is happening to those schools today?

According to the NCLB Media Report for 2009, all four schools were reconfigured after the end of the 2008-09 school year and prior to the start of the 2009-2010 school term. That reset their 2009-10 NCLB accountability status all the way back from a worst possible Tier 5 classification to having no accountability classification what-so-ever today – NONE!

Do you believe that?

Here is one example. This table summarizes the Maupin Elementary School’s NCLB performance by year since this program started. 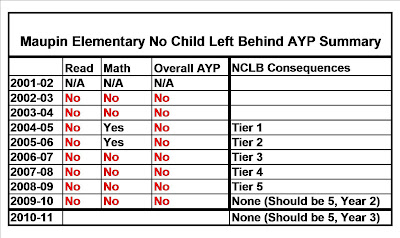 Note that Maupin never, EVER, met the Annual Measurable Objective score for reading under NCLB. By my estimate, Maupin would be a No Child Left Behind Tier 5, Year 3 school in this new school term of 2010-11 (Note, the department of education had to rename the “Tier” system to avoid confusion because the federal government is now using that name for something else. The correct new term would be Restructuring, Year 3).

Never-the-less, Maupin faces no consequences what-so-ever in the current school term. It won’t face consequences until after the 2010-11 NCLB scores come out around August or September of 2011.

Maupin’s entire school staff got a “Get Out of Jail Free” card from the district’s parent- and student-hostile busing nonsense simply because the enrollment in the school changed by at least 20 percent. Do you think an enrollment change that small should wipe out all accountability?

Still to be decided – what happens if Maupin fails NCLB again. Will it go to a “Restructuring” classification, or just start NCLB all over at the least severe category of School Improvement, Year 1 (The old Tier 1)? I’ve been talking to the Kentucky Department of Education about this very serious question. So far, no answers, but the department is sensitive to this obvious problem.

By the way, I have similar tables to the one above for the other three Tier 5 schools from 2008. Click the “Read more” link to see that.

Atkinson is unique among the four schools in this list in that it actually met AYP in the 2008-09 school term. If it had met AYP again in 2009-10, it would have earned its way out of the NCLB sanctions program (schools exit sanctions if they make AYP for two successive years). 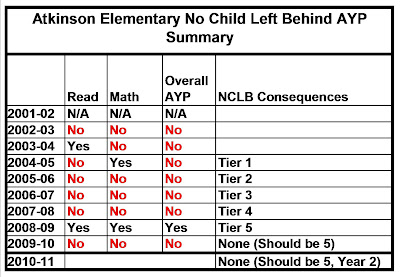 As you can see, that didn’t happen for Atkinson. But, thanks to Jefferson County “Bus-ting” NCLB, Atkinson got a “Get Out of Jail Free Card,” anyway. Is that in the best interests of this school’s students?

Hazelwood Elementary is interesting for a different reason. It has blazed a trail of grief for its students in reading ever since NCLB began. But Hazelwood actually started to perform badly under an earlier accountability program from the previous version of the federal Elementary and Secondary Education Act that preceded the NCLB version.

That is why Hazelwood was already in Tier status by the time NCLB reporting started in 2002-03 on this table. 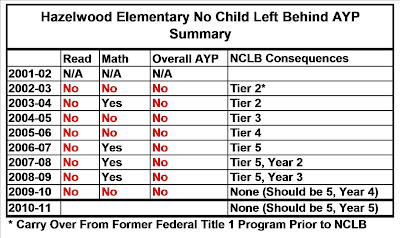 Okolona Elementary School, like Hazelwood, started down its trail of grief even before NCLB was enacted. 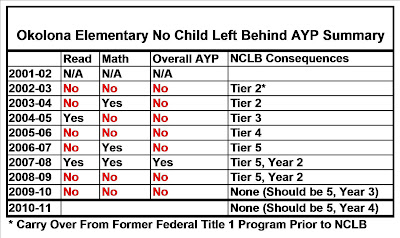 Because Okolona’s NCLB status got wiped clean in 2009-10, it will have to fail NCLB again next year before any consequences are felt in the school.

Here are some interesting questions:

Can Jefferson County play “NCLB BUS-ted” any time it wants? Will that happen over and over again in the future?

Busing has been going on in Jefferson County for decades. That clearly hasn’t done much to improve academic performance in the schools discussed here. All we are doing is subjecting different children to bad schools. Meanwhile, the educators in those schools have never really had their feet held to the fire. Neither has the local school board been held to account for continuing to impose its parent- and student-hostile busing scheme on everyone even thought the court mandate to do so was eliminated years ago and there is no evidence that this improves schools. Do you think it is time to demand better?

You can access the individual school NCLB reports I used to assemble the tables above from pull down menus here.

I doubt you’ll ever see a link from the Prichard Committee’s blog to our site, but when they get something really right, we are happy to acknowledge that.

In this blog Prichard takes a good shot at the Jefferson County School District’s lousy performance in the newly released state testing data for its many kids in poverty.

Someone in Jefferson County really needs to wake up.

Note: I have not double-checked the exact numbers in the Prichard post, but they usually get this sort of data correct. 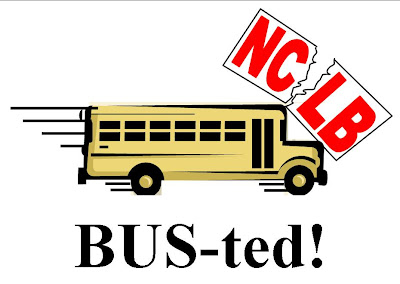 It’s no surprise. The Jefferson County Public School District’s chaotic busing plan – supposedly justified by needs for diversity – thoroughly trashed No Child Left Behind (NCLB) accountability for the district’s elementary schools. Is this the real reason educators in Jefferson County continue to defend this child- and parent-hostile mess?

Here are some of the gruesome statistics for the district’s 89 standard configuration (Primary to Grade 5) elementary schools:

• THEN: In 2008 a total of 21 Jefferson County elementary schools were in NCLB improvement categories ranging from Tier 1 to Tier 5. Another five schools lacked enough high needs students to be considered federal Title 1 schools, so they were not held accountable. However, these five schools also failed to make the NCLB targets.

• NOW: In 2010, only 10 elementary schools face consequences in the latest NCLB report. That is true even though NCLB standards got tougher during the past two years. In the new report, the non-Title 1 schools can also face state-level sanctions, but few did in Jefferson County.

Thus, in 2008 there were 26 Jefferson County elementary schools that would face sanctions, then in 2010, with the standards raised, only 10 schools faced sanctions?

Does that sound credible?

• In 2010 out of the 89 standard configuration elementary schools in Jefferson County, 67 (that’s 3 out of 4) were “reconfigured” and got excused from all NCLB accountability thanks to busing.

• Of the 67 reconfigured Jefferson County elementary schools in 2010, 56 (that’s 84 percent) actually failed to make overall adequate yearly performance in reading for at least two years in a row. WITHOUT BUSING, THEY SHOULD HAVE FACED CONSEQUENCES.

• Many of the same 56 schools that failed in reading also failed in mathematics.

• Out of the remaining 22 schools that were not reconfigured, 10 faced NLCB consequences. Thus, for those few elementary schools in Jefferson County that were held accountable, nearly half (45 percent) failed to escape NCLB sanctions in 2010.

Any way you slice this, a lot of schools that should be held accountable, were not.

It gets much worse.

These schools all failed consistently for at least six years.

All four schools were classified as reconfigured in 2010 due to busing. That zeroed out all their NCLB accountability.

But, what do you think happened to the academic performance in these schools? Are kids being served well enough that the faculty should be able to avoid all sanctions?

Stay tuned for more on that.

The data above came from extensive analysis of the 2010 No Child Left Behind reports and spreadsheets in the Kentucky Department of Education’s web site.

Access the entry portal page to all those reports here.