The choirmaster of the KERA Amen Chorus is at it again.

The Prichard Committee for Academic Excellence just released its “Kentucky Schools: Achieving the Top 20 by 2020: An Update.”

This little piece is a statistical cornucopia of apples and oranges comparisons.

Prichard’s paper starts out by making old news sound like new. It talks about “new results,” but some of the National Assessment of Educational Progress (NAEP) data in the paper date as far back as 2002 (NAEP Grade 4 writing). The NAEP science data is all five years old, as well. Who knows how Kentucky ranks on these today?

In another case, the data shown is identified as coming from the 2002 NAEP grade 8 writing assessment. It really comes from the 2007 assessment, but that is now three years old information. It isn’t new, either.

I have a lot of concerns about the way Prichard blithely ranks NAEP data. It’s not worth spending a lot of time on it, but I will address one representative example: Prichard’s claim that Kentucky ranks 9th for fourth-grade reading on the National Assessment of Educational Progress in 2009.

Are we REALLY that good? Can you tell it from the NAEP?

For starters, check out this graphic. 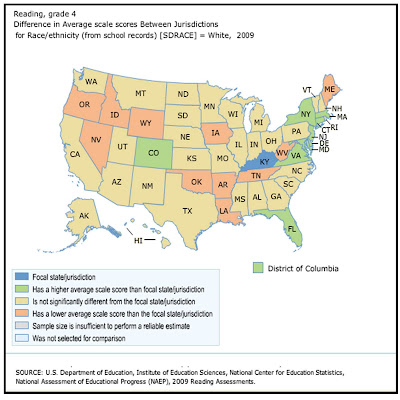 When we are talking about state to state performance, it is important to look at Kentucky’s white data because whites comprise about 85 percent of the total enrollment in our schools. This map shows states where white fourth grade student NAEP reading scores are statistically no different from Kentucky (highlighted in tan) along with the states that did better (highlighted in green) and worse (shown with salmon highlighting).

First, notice that NAEP cannot detect any differences in performance for white students between Kentucky and the 29 other states shown in tan. That’s because statistical sampling error in the NAEP makes it a rather blunt instrument to create state rankings (Prichard doesn’t talk about that).

Next, note that we really can only know with reasonable certainty that 11 states did worse than Kentucky, and we only know with certainty that 10 states did better. The only other thing we know about the huge majority of all Kentucky students is their performance fits – somewhere – in the enormous middle. That is all we can safely conclude from the 2009 NAEP grade four reading results for white fourth graders.

This example shows one reason why trying to rank the states on a range of 1 to 50 with the NAEP is rather silly. The NAEP doesn’t measure things closely enough to make that effort worthwhile, and that is why the NAEP reports themselves don’t provide such rankings. The experts who run the NAEP know that wouldn’t be a valid use of the results.

If you want to see more, such as how blacks in Kentucky did, and why you have to look at separated scores for whites when evaluating Kentucky’s NAEP performance, read on.

Here is a similar graphic for black only NAEP fourth grade reading performance in 2009. 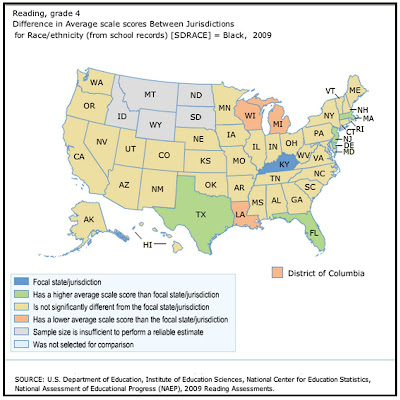 Note that some states in the northwest, highlighted in slate gray, have so few black students that the NAEP would not publish scores because the statistical errors got too large.

In general, even where blacks were present, the statistical errors are pretty big, so Kentucky winds up tying almost all of those states. Only three states and the District of Columbia did worse than Kentucky for black fourth grade reading. On the other hand, the NAEP’s sampling errors are so large that we can only say with certainty that a handful of states did better.

Basically, once you consider the statistical errors, you can’t tell much of anything about state to state rankings for blacks. That doesn’t mean there are no notable differences. It just means that the NAEP isn’t sensitive enough to show them with a high level of confidence.

By the way, here is the map comparing the ranking for all students across the various states to Kentucky. 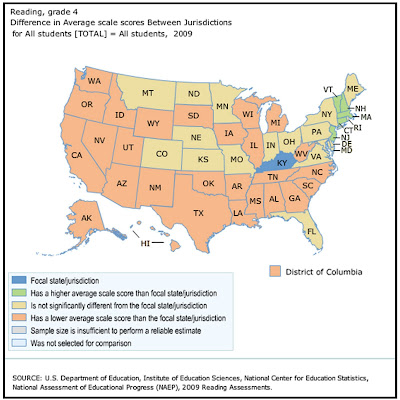 This looks more impressive for Kentucky. Many states did worse when all the student scores get averaged together.

But, how can that be when our whites and blacks didn’t do anything special compared to their peers?

The answer involves another problem with trying to rank states using the NAEP. Most states have a much lower percentage of whites than Kentucky does – MUCH LOWER. They also have much higher percentages of minority populations and English Language Learners (ELL). Those non-white and ELL students drag down the averages in the other states. Meanwhile, with its roughly 85 percent white, almost totally English as a first language population, Kentucky enjoys an incredible advantage in any simplistic comparison of overall NAEP scores. The NAEP offers no corrections for this, hence the graphic above makes Kentucky look really good.

However, that image starts to shatter once we break down the scores by race to compare apples to apples.

If you want to learn more about the pitfalls in trying to work with the NAEP, check out our freedomkentucky.org article about the National Assessment of Educational Progress.

And, watch out for those who try to fool you with figures.

Technical Note: The graphics above were assembled with the Main NAEP Data Explorer.

The Kentucky School Boards Association captured this story from yesterday’s meeting of the Kentucky Board of Education nicely.

As I understand this, Kentucky Commissioner of Education Terry Holliday wants to insure that students who don’t go on to college but do integrate into technical training successfully are also credited as a school success in the new accountability system.

This idea will have to be considered very carefully to insure it does not become a lever for schools to water down the intent of Senate Bill 1, which is to insure that students, not schools, have the option and make the choice to go to college or technical training. Note that the law, as the article points out, does not mention the tech training track.

What is the biggest threat to the country?

No, it’s not what you think.

Jim Waters, Bluegrass Institute vice president of policy and communications, will speak Sunday at a Louisville TEA (Taxed Enough Already) Party rally, which will be held from 4 p.m. to 6 p.m. at Jefferson Square.

Greg Fischer, the Democratic candidate for mayor of Louisville has joined the bandwagon of critics of the Jefferson County Public Schools’ insane school busing scheme.

Says Fischer, “We’ve got to fix the student-assignment plan.” He also has figured out, “If our kids are going to compete, they have to get a first-rate education.”

Thus, concerns about the busing mess are becoming bipartisan.

Well, in other states, chronically under-performing city school systems have been taken over by the mayors of the cities involved. New York City immediately comes to mind.

Maybe, as we used to say in the fighter pilot world, Berman better “check his six” (meaning, watch out for someone who could be coming up behind your six o’clock position). If Jefferson County Schools continue on their low-performing, citizen (and yes, legislator) angering track, someone like a new mayor just might come gunning for Berman and his parent aggravating school board.

The price of freedom is eternal vigilance.

Harald Zieger, a former “prisoner” of the Communist German Democratic Republic, would agree. Zieger worries about Americans who tell him, “It can never happen here.”

Check out Zieger’s concerns in this video extract of his comments at the 1st Annual Commonwealth Freedom-Liberty Conference on October 2, 2010.