Even the most wishy-washy response made it clear that none of the candidates favors trapping kids on buses for two hours a day. All seem open to the need for changes.

Sometimes, the right choice is so obvious that it even crosses all the political lines. Two hours on a bus every day is too long.

So, why is it that such universally held opinions still escape the education crowd?

The Louisiana Department of Education publishes an annual report on the ACT performance of each graduating class. The report breaks the scores and number of ACT test takers down to the individual high school level. That allowed me to take a look at how charter schools and regular public schools in Hurricane-Katrina-ravaged New Orleans performed.

The results are remarkable. While I still have some unanswered questions, a couple of observations are easy to make:

• The high school infrastructure in New Orleans clearly was rebuilt after Katrina with a very heavy contribution from charter schools.

• Post-Katrina New Orleans is doing far better on the ACT than it was before it became largely a charter high school city. 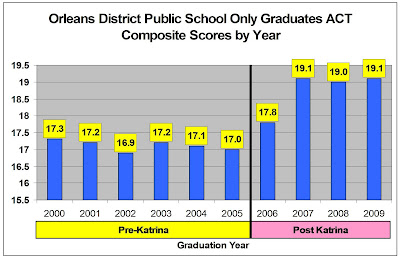 • Scores are up all over New Orleans in both regular and charter high schools, but the rise in charter school ACT scores has been really remarkable.

To learn a lot more, and see some more supporting graphs, click the “Read more” link below.

First, the graph above, which I developed from the 2004 and 2009 ACT reports from Louisiana (Available Here) shows the overall change in ACT Composite Scores in the Orleans District over the past decade. The scores shown here are for public school students only.

There was a slow decay in performance prior to Katrina, which hit one week after the 2005 ACT results were released. Then, there was a remarkable increase in scores thereafter.

This shows that something very different was going on in New Orleans education after the big storm hit. The over two-point rise in the ACT Composite Score is remarkable.

The next two tables show that by 2009 the Orleans District had been rebuilt as a largely charter school district. 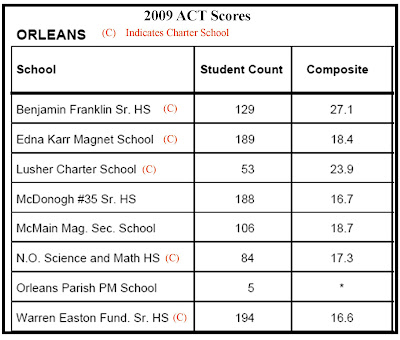 Table Note: Orleans Parish PM School was ignored in creating the second table. It had too few students for scores to be reported and would not have made an appreciable difference in any event.

But, the really remarkable thing is that the charter high schools, though only in operation for a few years, significantly outscored the regular public high schools in the “Big Easy.” A 2.5 point spread on the ACT is a huge difference.

To be sure, as you look at the first table, not all the charters in New Orleans outperform the regular public schools, but there may be another message here.

Pre-Katrina when the city had few charters, the overall district ACT Composite Score was only 17.0. Now, even the average for the regular public schools is notably higher at 17.4.

Could this be evidence of a ‘raises all boats’ charter effect? Or, is this just due to some very poor students permanently leaving the “Big Easy” after Katrina?

I don’t have access to the data to clearly say.

However, there is a hint in the eighth grade National Assessment of Educational Progress Reading reports that the poverty excuse might not work here. I ran the NAEP Data Explorer to determine Louisiana’s 2005 and 2009 percentages of students who were eligible for the federal free and reduced cost lunch program. In 2005, 56 percent were eligible, and that rose to 62 percent by 2009. The 2005 NAEP data was collected about six months before Katrina hit.

I don’t have data on free and reduced cost lunch for Orleans alone, unfortunately, so I won’t speculate further on this information. However, it would not be inconsistent with the possibility that poverty in New Orleans today remains significant.

More on the 2010 ACT results for Kentucky versus Louisiana

Are some Kentucky schools teaching college track courses in name only?

I’ve already blogged about the fact that Louisiana tested almost all (98%) of its high school graduating class of 2010 on the ACT college entrance test, which nearly equals Kentucky’s 100 percent testing rate for its 2010 graduates. Thus, comparisons between Kentucky and Louisiana’s ACT performance seem worthwhile to present. I think there are important messages here that Kentucky needs to heed.

I pointed out earlier that despite Hurricane Katrina’s devastation, Louisiana outscored us overall on the ACT in 2010. However, the Kentucky to Louisiana comparison gets even more interesting when we break the data down.

I did that for minorities in this blog.

However, more data is available.

I used Table 2.10 from the individual “ACT Profile Report – State” reports for Kentucky and Louisiana (available here) to assemble the data below (click on table to enlarge).

For each state, the data shaded in green shows the number of students taking at least the ACT’s recommended college core curriculum in each subject (N) along with the percentages of students who scored at or above the ACT’s College Readiness Benchmark (CRB) score in each subject and the state average ACT scale score (Avg) in that subject. This data comes directly from Table 2.10 in the ACT Profile Reports. It includes results for all students, public, private and home school combined.

The additional rows, shaded yellow, contain my calculations of the percentages of the ACT takers in each state from the Class of 2010 who reported taking at least the minimum College Core course load. I calculated these numbers from additional data found in Table 2.10 that is not shown here. That data includes the number of students in each state who did not take the core (Note: I ignored an additional group of students that didn’t answer ACT’s questions about course taking patterns).

The table shows the numbers, but what do they imply? Click the “Read more” link below to find out.

There are a couple of key points.

First, comparing the two rows of green shaded data, it is clear that Louisiana students who take at least the minimum Core Courses do better than our kids do. More of them reach the CRB scores that signal good college preparation, and their average ACT Scale Scores are higher, too.

These different results may be due to more kids in Louisiana taking more than the minimum courses for the core (I have not found information on that, so far, in the ACT reports). It also could be an indication that in some of our schools, college courses are in name only. The possibility of low course quality is something Kentucky needs to investigate further.

Second point, across the board, higher percentages of students in Louisiana take more college track courses than we find in Kentucky. You can’t get ready for college or better paying technical jobs if you don’t get the entry skills and education required. This lower participation in the college core courses in Kentucky is definitely an area for focus.

Statement on the passing of Prichard leader Robert Sexton

Statement on the death of Robert F. Sexton, executive director of the Prichard Committee for Academic Excellence:

“Mr. Sexton should be remembered for his tireless dedication to improving Kentucky’s education system. While we had differences of views on how to reach that goal, Mr. Sexton was committed to calling attention to the desperate need for education reform in the commonwealth. We extend our condolences to Mr. Sexton’s family and colleagues.” – Jim Waters, Vice President for Policy and Communications

Kentucky Education Commissioner Terry Holliday is taking a realistic, and optimistic, outlook about what Kentucky’s education system now will need to implement Senate Bill 1 (2009 Regular Session) after the announcement two days ago that Kentucky had not won any money in Race to the Top, Phase 2.

The commissioner told yesterday’s meeting in Frankfort of the School Curriculum Assessment and Accountability Committee:

“So I am saying everywhere as loud and clear as I can be heard, that I don’t think we need new dollars. I think we need redirected dollars in the state budget because new dollars are going to be difficult to find.

But, this is not a popular statement.

The state board last October started looking at ‘flow-through dollars’ – there’s $125 million that flows through the department of education for special programs that are great programs – love every one of them – but you cannot continue to run the small pilot programs for just a handful of districts when every teacher in the commonwealth needs textbooks.”

Regarding the commissioner’s comment that he can make it work with existing resources, this is exactly the common-sense, frugal approach to government spending that we need to hear a lot more about in Frankfort, and not just from state educators.

Quote of the century

“Instead of trying to figure out how to get more money for education, schools across the state are figuring out how to get more education for our money. We should all follow their examples. And while we are at it, we must channel the resources we do have directly to student learning.” – Tony Bennett, Indiana’s superintendent of public instruction, during his “State of Education” speech Monday (quoted in today’s Education Reform Radar).