What is the biggest threat to the country?

No, it’s not what you think.

Jim Waters, Bluegrass Institute vice president of policy and communications, will speak Sunday at a Louisville TEA (Taxed Enough Already) Party rally, which will be held from 4 p.m. to 6 p.m. at Jefferson Square.

Greg Fischer, the Democratic candidate for mayor of Louisville has joined the bandwagon of critics of the Jefferson County Public Schools’ insane school busing scheme.

Says Fischer, “We’ve got to fix the student-assignment plan.” He also has figured out, “If our kids are going to compete, they have to get a first-rate education.”

Thus, concerns about the busing mess are becoming bipartisan.

Well, in other states, chronically under-performing city school systems have been taken over by the mayors of the cities involved. New York City immediately comes to mind.

Maybe, as we used to say in the fighter pilot world, Berman better “check his six” (meaning, watch out for someone who could be coming up behind your six o’clock position). If Jefferson County Schools continue on their low-performing, citizen (and yes, legislator) angering track, someone like a new mayor just might come gunning for Berman and his parent aggravating school board.

The price of freedom is eternal vigilance.

Harald Zieger, a former “prisoner” of the Communist German Democratic Republic, would agree. Zieger worries about Americans who tell him, “It can never happen here.”

Check out Zieger’s concerns in this video extract of his comments at the 1st Annual Commonwealth Freedom-Liberty Conference on October 2, 2010.

Our education problem: the “Cult of Can’t”

It’s the season of No Child Left Behind (NCLB) score releases, and once again a bunch of educators around the state are complaining that they can’t be expected to perform at high levels with all their students because many Kentucky kids live in poverty.

Neither does Kentucky Commissioner of Education Terry Holliday.

Today, the commissioner took direct aim at what I am starting to call the “Cult of Can’t” with some very interesting scatter plots that compare each school district’s rate of poverty to the combined percentage of students that scored Proficient or more on reading and mathematics on the 2009-10 Kentucky Core Content Tests.

Here is the graph: 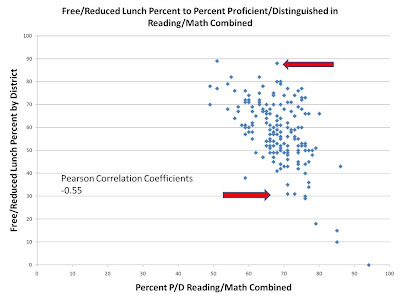 Note in particular the two school districts’ data points the commissioner highlighted with arrows. Both have very similar combined proficiency rates in reading and mathematics of around 70 percent. However, one district’s poverty rate, as measured by the percentage of students in the federal free and reduced cost lunch program, is only 30 percent, while the other district has a very high rate of poverty around 88 percent. Still, that high poverty district is matching the performance of the first district.

The commissioner had more examples. Click the “Read more” link to see that.

Here is the commissioner’s second slide regarding poverty data: 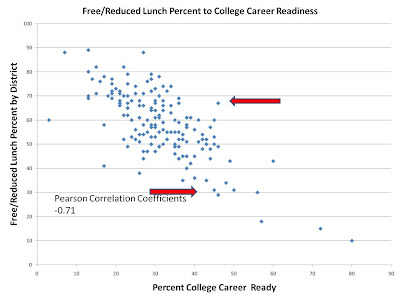 This slide compares poverty rates in the districts to the percentage of students who were college and career ready on recent ACT tests. Once again, the arrows point out two districts with virtually identical readiness rates, but very different poverty rates.

To be sure, the general trend in both of these examples is for schools with more poverty to have lower performance (shown by the negative Pearson Correlation Coefficients – for readers who like the math “stuff”). However, Commissioner Holliday’s examples show that isn’t necessarily the case every time. Some districts with lots of poverty are making things work much better for kids.

Another way to look at this is to consider the previous slide by looking horizontally across instead of vertically. Consider the two circled data points in this graph: 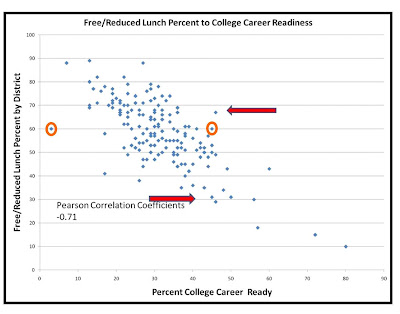 I certainly sensed today that the commissioner has had enough of the “Cult of Can’t.”

I sure have, and I am glad to have him join me.

No-one is saying that getting a lot more poor kids to proficiency won’t be a real challenge, but just making excuses when we see examples of hope isn’t acceptable, either.

Some people learn slower than others. That has certainly been the case where education in Kentucky is concerned.

From its inception in 2003, the Bluegrass Institute has been warning Kentuckians that the pace of progress in our public school system is just too slow.

We pointed out to the Kentucky Legislature years ago that far too many kids – many more than officials wanted to admit – weren’t even completing school, but were dropping out instead.

We published charts from the Council on Postsecondary education again and again that showed far too many Kentucky high school graduates were going on to college and promptly finding themselves in expensive remedial courses.

We’ve been pointing out for years that credible tests from the National Assessment of Educational Progress show that even today only around one in three fourth grade students tests proficient in math and reading, while in eighth grade the proportion is closer to only one in four. Meanwhile our state assessments turned in highly inflated reports of proficiency.

Now, finally, it looks like the KERA Amen Chorus is starting to sing a new tune.

This hand-wringing piece from the Daily Independent in Ashland cites recent analysis from the Prichard Committee and two other groups. That analysis also shows our schools are not on track to get kids to proficiency by 2014 and that something dramatic has to change.

Finally, the slow learners are catching up.

Of course, there is a price to pay for two decades of under-performing schools. And, you don’t have to look far to find some evidence. Note that the Independent’s title on their opinion piece has not one, but two obvious spelling errors. So much for all that KERA supported Whole Language Reading “stuff” that said we should allow kids to learn to spell “naturally!” 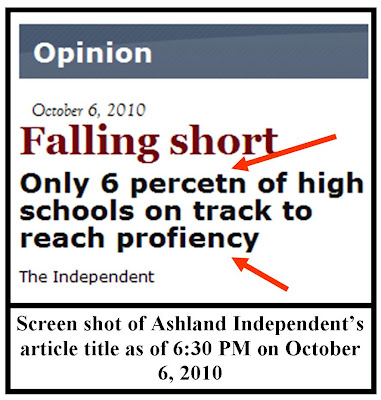