Don’t believe schools don’t have to have 100 percent proficiency in 2014 to avoid NCLB trouble?

I talked in an earlier blog about how the abuse of a statistical process called “Confidence Intervals” means Kentucky schools don’t have to post 100 percent proficiency rates in 2014 to avoid No Child Left Behind (NCLB) sanctions.

How about some real examples?

The Trapp Elementary School in Clark County is a top performer, but it doesn’t need to get all of its students to reading proficiency in order to avoid NCLB trouble in 2014. In fact, it could be considered to be done now, even though its current proficiency rate in reading is less than 90 percent.

As this graph shows (taken from the Trapp Elementary School’s 2010 NCLB Report, access from pull down menus here), the school’s current proficiency rate of 87.50 percent plus the confidence interval “bonus points” already place the school in the 100 percent proficient category for NCLB purposes (click on the graph to enlarge). 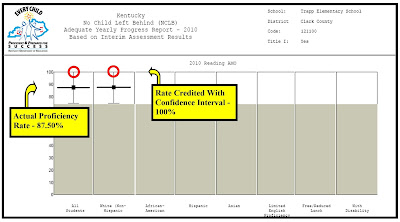 Actually, Trapp Elementary makes 100 percent with about a half a point to spare. The top of the confidence interval in this graph was cut off. It really rests at 100.45.

Want to see an even more impressive example? Click the “Read more” link 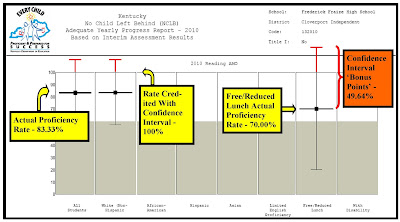 As with Trapp, the confidence intervals are good enough to boost Fraize’s actual proficiency rate for all students of 83.33 percent to well over 100%.

But, look at what happens to a small student subgroup in the school, the kids in the free and reduced cost federal lunch program. Their confidence interval is enormous, more than adequate to boost their true reading proficiency rate of 70 percent to well over 100 percent.

In fact, the lunch eligible students at Frederick Fraize could score a proficiency rate much lower, around 50 percent, and the confidence interval nonsense would still have NCLB crediting the school as a success with its poor students.

Is that a success in your eyes?

By the way, a similar situation to the school lunch example for Fraize High exists for the learning disabled students in most schools. Where there are even enough of these students present for the school to be held accountable, their numbers are usually very small, so their confidence intervals tend to be rather large.

So, the learning disabled kids generally don’t have to score anywhere near 100 percent proficient for their school to avoid NCLB sanctions.

Now do you see why educator complaints about NCLB, at least in Kentucky, just don’t work for me?

In the middle of all the Kentucky score report hoopla, I don’t want to forget to mention that the Washington Post read our recent blog, “Report builds mountain out of education ant hill” and asked us to provide a short intro plus link for posting in their blog.

To the Post’s credit, when they get better information, they fix what they write.

“The worst deficit comes from a recession. And if we can take the proper action at the proper time, this can be the most important step we could take to prevent another recession – that is, the right kind of a tax cut. Every dollar released from taxation that is spent or invested will help create new jobs. –President John F. Kennedy