WAVE-3 has the details, including a video interview with the child’s mom, here.

This is what happens when social engineering tries to trump education in neighborhood schools.

When will the people in Louisville wake up?

With all the state facing budget shortfalls and laying off workers, clear thinking Kentuckians want to know: Why does Gov. Steve Beshear continue to defend using $200,000 of taxpayers’ hard-earned money to fund a Washington, D.C.-based climate-warming extremist group?

Do Kentucky taxpayers really want to fund a group that already gets big bucks from leftists like George Soros? Does this governor really believe that Soros would not shut down our coal industry if he got the chance?

What did you think about the Governor’s TEK Forums?

As promised, here is a place to post comments about Governor Beshear’s Transforming Education in Kentucky Forums that were held around the state yesterday, August 17, 2010.

I’ll withhold my comments for a few days to let you, our valued readers, chime in. 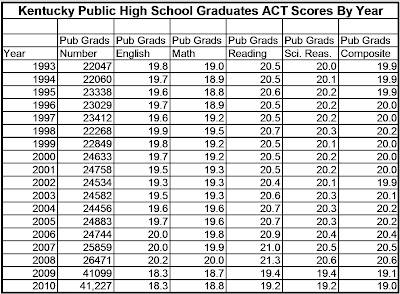 Note that the ACT Composite Score (an average across the four academic subjects) dropped between 2009 and 2010. There was only a very slight increase in the number of public school graduates who took the test, which makes the score reduction particularly troubling.

One piece of good news is that math scores for 2010 inched up another tenth of a point, but this was more than offset by the declines in reading and science.

In reviewing this table, keep in mind that Kentucky started testing all students with the ACT several years ago, and that is why the scores dropped dramatically in 2009.

However, the continued decline in 2010 is a bad trend. An excuse that this is due to more students taking the ACT this year is not valid because the change in the numbers is very small.

If you want to see more tables like the one above which cover the combined results for all students, public and private, in Kentucky, and even a table separately covering the performance of students in non-public education environments, we have them for you in the freedomkentucky.org Wiki here.

You can find the ACT, Incorporated’s public access page with the 2010 results for all graduates combined who took the 2010 ACT here. Links on that page will take you to a variety of reports with both national and state scores.

The ACT just released the results for its college entrance test for the Class of 2010. For the first time, ACT reports that a number of Southern states had at, or nearly at, 100 percent participation on this important test.

Here, broken down by race, are the percentages of the 2010 high school graduates in those four high participation states that the ACT says are ready for College English Composition. 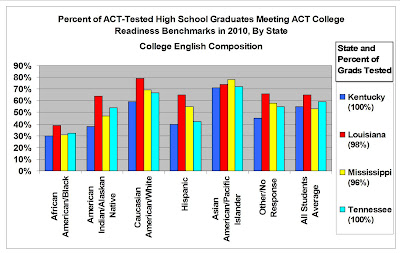 As you can see, Kentucky, which is shown by the medium blue bars, lags the pack – Yes, even Mississippi!!! – across every racial grouping, across the board. The only reason that Kentucky looks better than Mississippi when all students’ scores are averaged together (see the far right set of bars) is because Kentucky has very few minority students while the other states are much more diverse.

What makes this graph particularly disturbing is that Kentucky spent a fortune over the past 20 years to include portfolios in the state’s high stakes assessment and accountability program. Educators thought that was going to boost our kids’ performance in the English Composition area. Sadly, the fad idea of using writing portfolios in high stakes assessment clearly didn’t work out. The problem was that rules to prevent cheating on the portfolios wound up tying our writing teachers’ hands. Thus, a great instructional tool was corrupted into a detriment, not a plus. After nearly two decades of trying to make writing portfolios work in the assessment, Kentucky finally gave up in 2009. Sadly, it may take years for the bad impacts from the program to work its way out of our school system.

There are other exciting things going on in this graph. Perhaps the most remarkable concerns post-Katrina Louisiana and Mississippi. Both states took heavy damage in their Southern regions from that worst-damage-ever event, school buildings included. I already wrote about the Louisiana experience in an earlier blog, but this graph shows that even storm ravaged Mississippi is giving us a run for our money in English.

I need to point out that Kentucky did better against Tennessee and Mississippi on the other ACT tested subjects of math, reading and science, but charter-school-heavy Louisiana generally outshined us across all those other ACT academic test areas with their 2010 graduates, as well.