Taking liberty to the airwaves

A cup o’ TEA in Owensboro

UncategorizedBy Jim WatersOctober 20, 2010
Join the Bluegrass Institute at the Owensboro Tea Party this Saturday, Oct. 23. Jim Waters, vice president of policy and communications, will speak at the event being held from Noon to 2 p.m. outside Owensboro City Hall, 101 E. Fourth St.

Most Americans do NOT want more federal interference in states’ education policies. But they DO want merit pay for teachers.

Cato’s Neal McCluskey reports in the latest edition of School Reform News that a new Phi Delta Kappa/Gallup Poll indicates “seven in 10 Americans say a teacher should be paid ‘on the basis of his or her work.'”

Also, there’s been a sharp rise in support for tying teacher pay to test scores — from 60 percent in 2000 to 73 percent in the latest poll.

Adding to the impressiveness of these results is the fact that PDK in its release of the poll included “vignettes from teachers union leaders and other education establishment voices,” according to comments given to McCluskey by Jeanne Allen, president of the Center for Education Reform.

The Ashland Independent gets it about the need for postsecondary education in the current economic climate. Their editorial on the subject is a good read.

I would only add one comment. Towards the end of its editorial, the newspaper says, “Maybe some of those attending Friday’s session are not college material. Maybe they want to be a carpenter or plumber or mechanic. If so, they need to be developing those skills while still in high school.”

That might be misunderstood if taken out of context.

Today, even if kids want a non-college career like being a lab technician, auto mechanic, plumber or electrician, they may need many of the same skills in math, reading and science that entering college freshmen must master. The ACT, Incorporated, which has a lot of experience in the work area through its employer testing program called Work Keys, tells us that.

The people at the Kentucky Department of Education and in our legislature also understand that. This is why they all now talk about preparation all our students for “college and careers,” not college or careers. In fact, preparation for either is now largely the same.

I think the paper actually does understand this. Their closing comment is, “And all the students leaving the session (to tell students to stay in school) should know that just having a high school degree is no longer enough. At least some postsecondary is no longer just a good idea, it is essential.”

Patrick Henry is going too debate Thomas Jefferson on early issues of Separation of Church and State!

It’s a re-enactment coming November 7, 2010 to the Cincinnati area, and it might be just the ticket for fun, and maybe education, for some of our readers. 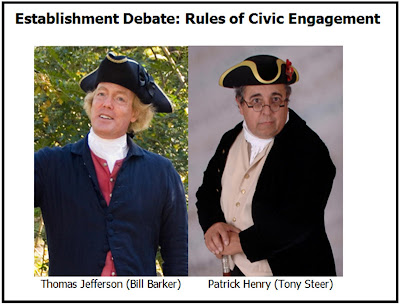 On Sunday, November 7, 2010 they will be presenting “Establishment Debate: Rules of Civic Engagement” which deals with the early issues of Separation of Church and State. The subject of this debate is presented by the Williamsburg Foundation every year in April during their Religion Month programming.

Following the debate, “Mr. Jefferson” will open the floor for Q&A with audience participation and after that, a panel discussion with local scholars followed by a mix and mingle coffee reception.

Here are some details:

The Mercatus Center at George Mason University has released a some very telling data – take a look.. 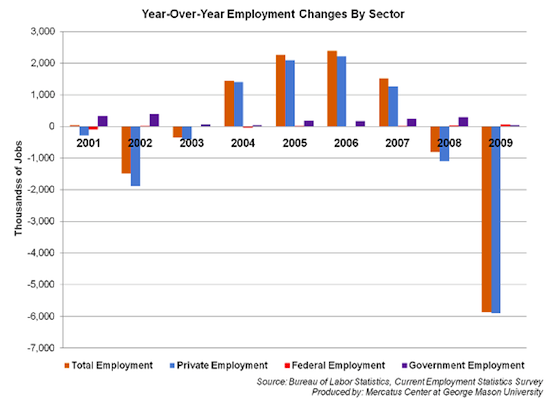 Imagine that, total employment and private employment seem to be closely tied.  More proof that bigger government is not the answer to creating jobs.