While federal officials continue to tout the benefits of the Patient Protection and Affordable Care Act (PPACA), 20 states have won an important victory in the fight to sue the federal government over the constitutionality of the new law.

Judge Roger Vinson of Federal District Court in Pensacola, Fla., struck down the government’s attempt to dismiss the lawsuit from trial.

The repercussions of Vinson’s ruling on states’ powers cannot be overstated.

“Our whole system of federalism rests on the decisions of this case,” Florida Attorney General Bill McCollum, the lawsuit’s lead plaintiff, told the New York Times.

Despite the fact that Kentuckians’ insurance premiums now are rising due to increasing costs caused by the federal plan, Kentucky Attorney General Jack Conway refuses to join the fight to prevent Washington’s takeover of the commonwealth’s health care policy.

Conway labeled a letter sent to him earlier this year by 29 state lawmakers requesting that he join the effort to stop the health care fiasco “a political stunt.”

But how should states respond? The Heritage Foundation’s Gregg Girvan details how states can protect their citizens. 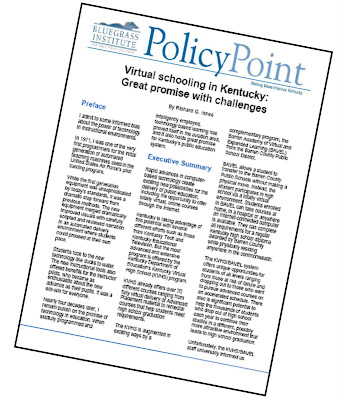 It focused on the Kentucky Virtual High School system which serves both advanced students who want to take Advanced Placement courses and those students who have fallen behind and need special help.

Now, another variation of an e-learning program is starting to produce benefits in Hopkins County.

The Kentucky School Boards Association is echoing a Messenger (Madisonville) article about a new e-learning based program in Hopkins County that has already produced its first graduate. Instead of being a dropout, newly graduated Dillion Ellis is on his way to a potentially very worthwhile career as a diesel engine mechanic.

My only concern as I read the article is that the new Academy will graduate students with only 23 credits while the regular high schools in Hopkins County require either 25 or 27 credits to graduate. All still exceed the state minimum of 22 credits, however.

A “Well Done!” is in order for Hopkins County for harnessing the promise of technology for students who need extra help. This technology-based system is meeting needs of students who must work and need special schedules and other assistance which can be greatly facilitates with E-learning approaches.

The law restricts contributions from individuals to $100 while the union continues to poor hundreds of thousands into the campaign of its chosen candidates. That unfair and unbalanced policy gives teachers’ unions a hugely unfair advantage in controlling those political school board races.

Teachers’ unions take full advantage of it, as well, by doing such things as helping get school board members who favor union policies over children’s education elected. Such mischief might be occurring in Carter County, where union-oriented school board members have approved a Project Labor Agreement (PLA) in construction of a new school.

It’s outrageous that some of these board members stand to personally benefit from their “yes” votes on the PLA. It’s also proper that the Associated General Contractors of Kentucky have filed a lawsuit against the Carter County Board of Education and Kentucky Department of Education

No union should be able to buy board members, legislators or votes. Thank goodness a federal judge finally said “STOP.”

UncategorizedBy Jim WatersSeptember 15, 2010
The Environmental Protection Agency’s (EPA) increased regulations on coal mining in Kentucky and several other states have done more than just tighten the rules in coal states; they have fueled an angry response from supporters of coal.
Coal workers are protesting the increased EPA regulations, as they both threaten their jobs and the coal industry as a whole.
Representatives from Kentucky’s coal industry joined members of the Federation for American Coal, Energy and Security (FACES of Coal) and national legislators from both parties for a rally on the Capitol steps in Washington, D.C., to protest the EPA’s new rules limiting mountaintop mining, which threaten one in every four coal jobs in the region. Nearly 18,000 jobs and 80 small businesses are linked to the new permits.
Not only do EPA mandates threaten Kentucky’s economy, they also jeopardize the commonwealth’s electricity rates, which are some of the lowest in the nation.
Coal produces more than 90 percent of Kentucky’s electricity and supports 84,000 jobs in the commonwealth, according to the National Mining Association.
When federal agencies like the EPA dictate rules and regulations, we as state citizens foot the bills – usually in the form of higher utility payments – and lose the jobs, neither of which Kentucky can afforded during the current economic malaise.

“I think we have more machinery of government than is necessary, too many parasites living on the labor of the industrious.” –Thomas Jefferson