The program is hosted by Bill Goodman live on KET1 and will be replayed Wednesday at 2 a.m.(EST).

During the live Monday broadcast, viewers with questions and comments may participate by e-mail at kytonight@ket.org.

Waters will be joined in his call for more responsible education policies by Rep. Brad Montell, R-Shelbyville, who will help lead the effort for charter schools in the 2011 session of the Kentucky General Assembly.

And even national educators don’t depict the situation properly!

The National Assessment of Educational Progress just released new data in the web on the testing of the nation’s students in reading and mathematics in 2009. Among other things, the release has this very clear statement from the National Assessment Governing Board about the real desired level of student performance.

That is a very good statement. It agrees very well with data that shows grade 8 NAEP reading and math proficiency rates compare remarkably well to the percentages of students who are on track for college and careers according to EXPLORE test results from Kentucky.

However, the information in the web also includes more, such as this disturbing graph, cut and pasted from one of the web pages with the title added (highlighted in green – title was off screen when the screen shot was taken). Tech Note: Screen shot taken Nobember 20, 2010, of “National Results, 5 of 9, Tab “National Results Grades 4 & 8,” from here. The graph also has the understatement of the century, claiming that the gaps, “have not been reduced.” I guess not. They have GROWN dramatically!

But, there is an even BIGGER problem with this graph. It IGNORES all the additional students who scored better than “Proficient,” at the level NAEP calls “Advanced.” That’s the wrong way to present the data on gaps.

Here is a graph I assembled today using data downloaded from the NAEP Data Explorer. This graph includes ALL students who scored at or above NAEP Proficient on NAEP grade 4 math. 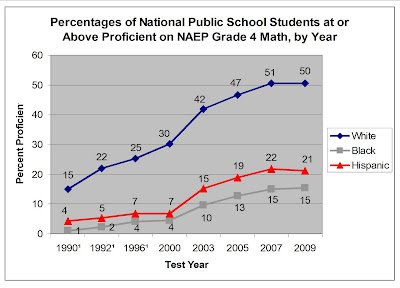 Now we see the real black-white grade 4 math performance gap is 50 minus 15, or 35 points, 8 points higher (about 30 percent worse) than the 27 point difference web page graph owns up to!

The difference is that virtually no blacks score “Advanced,” while about 8 percent of the whites do.

Using the ‘right stuff,’ the gap back in 1990 was only one point higher than the misleading impression created by the NAEP’s graph in the web.

Anyway, the basic message stays the same. The gaps are not only very bad – they are getting worse.

So, here are some questions:

Why do educators in Kentucky continue to try to fool us by citing numbers for NAEP “Basic” as though this is a suitable performance target when our own testing data from EXPLORE and even the people who run the NAEP testing program say NO, It ISN’T!

And, why did national educators get their gap depiction wrong, too? Was it just a statistical error, or something more?

The gaps are VERY serious, and they are getting WORSE!

And, our kids deserve to have the situation portrayed accurately.

Thinking outside the ballot ‘box’ gets us nowhere

America’s founders knew that individual citizens would play a vital role in renewing liberty. However, turnout at the polls in recent years suggests a majority of Kentuckians — unlike voters in other countries — don’t understand how much their vote really matters.

A new study by Americans for Tax Reform shows states gaining congressional seats in the decennial reapportionment process have “significantly lower taxes, less government spending, and were more likely to have ‘Right to Work’ laws in place” compared to those states losing seats.

The study found the average top personal income tax rate among gainers is 116 percent lower than among losers. It also revealed the total state and local tax burden, as well as government spending, was about one-third lower.

In addition, seven of the eight gainers give workers the choice as to whether or not they join a union.

“Because reapportionment is based on population migration, this is further proof that fiscally conservative public policy spurs economic growth, creates jobs, and attracts population growth,” the ATR report said.

It’s tough to argue with the facts.

Jefferson County educators don’t get it: They operate a lot of very weak schools

I wrote a couple of days ago that educators in Jefferson County are whining and sniveling about finally having to face some accountability for their many very poor performing schools.

Sadly, instead of buckling down to figure out how to improve their under-performers, teachers along with Jefferson County superintendent Sheldon Berman are instead trying to torpedo House Bill 176. That’s the law which is finally bringing some serious accountability and hope for improvement to the state’s very worst schools, the majority of which are found in Louisville.

To hear Berman and his cohorts tell it, it’s the bill that is all wrong.

Here are a few examples of the performances in Jefferson County Public Schools (JCPS) low-achieving schools that demand strong action:

• No Child Left Behind Reports show math proficiency rates for all students range from a low of 4.7 percent at ‘The Academy at Shawnee’ to 28.53 percent at Seneca High School. These are the top and bottom performers in Jefferson County’s low-achieving listing.

• Twelve of the 20 Persistently Low-Achieving Schools in Kentucky are in JCPS – That’s 60 percent of all such schools in the state. For a point of reference, the district enrolls only about 16 percent of the state’s public school students.

• Among the district’s Persistently Low-Achieving High Schools, three – Iroquois, Valley and Shawnee – have gruesomely low graduation rates below 60 percent even according to the Kentucky Department of Education’s (KDE) seriously inflated statistics.

That easily qualifies these schools as “Dropout Factories” according to a definition developed by a Johns Hopkins University team that researches graduation rate reporting.

• If the KDE reported graduation rates by race for schools, blacks in these schools would do even worse, as we discussed in our report, “How Whites and Blacks Perform in Jefferson County Public Schools” two years ago.

Anyway, teachers and their superintendent in Jefferson County don’t seem to understand what they are doing. Their fussing about such things as required staffing changes included in HB-176 is seriously uninformed (more on that later). Most importantly, their ‘shoot the messenger’ grousing about finally being held accountable for poor performance in their schools just further erodes confidence that Jefferson County educators are really interested in turning these schools around.

The whining sends a message, and it’s a bad one: Jefferson County educators are far more interested in protecting adult turf than in digging in to create positive changes for the grossly under-served students in the district’s clearly low-achieving schools.