UncategorizedBy Rick LDecember 6, 2010
Kentucky’s approach to brainstorming school reform is to fill task forces with those who want to protect the status quo and who can’t implement a single reform. It’s a brilliant political approach because there will be no real system change and everyone will get along.
But there is a different approach. Real commitment and being really serious about it!
[youtube=http://www.youtube.com/watch?v=Pn4_0IV0JME?fs=1]
Who will champion this cause in Kentucky?
Who has the courage in Kentucky to tell it the way it is?
Who will — once and for all — put Kentucky kids first?
The silence is deafening, isn’t it?

Blue skies ahead for Gray’s pension

A few days ago, State Labor Cabinet Secretary J.R. Gray retired three years following his appointment to the position. This calls for a celebration.

For his service, Gray will receive a high five, er…three from the state and a bloated pension bonus estimated at about $1.2 million.

Hey, no retirement party is complete without presents, right?

Thanks to a 2005 law, Gray’s legislative pension is calculated on the salary he received in his three years as cabinet secretary — $137,865 this year alone — instead of the 26 years he served in the Kentucky House of Representatives.

This loophole permits lawmakers to base their legislative pensions on the salary of another government job held either before or after serving in Frankfort.

The law also lowered the salary multiplying factor used in figuring pensions from a “high five” to a “high three.” Gray’s six-digit salary from his three years as cabinet secretary counts as his “high three,” which means his pension will be figured completely on his salary as secretary.

In contrast, his “high three” from his years as a state representative would have been a much lower number — around $40,000.

In all, his pension added about $400,000 each year to his three-year salary as secretary, meaning Gray was essentially paid over a half-million dollars a year for heading the labor cabinet.

Now, he’s retiring in time to barely meet the three-year requirement and cash out on his oversized pension.

Gray and all of the other political cronies who plan to take advantage of this taxpayer-funded cash cow might be celebrating. But citizens are not.

Fort Campbell chapel: Where did all the money go?

Back in October, Fort Campbell began work on a brand-new $8.4 million chapel complex, expected to be completed by 2012. The chapel will seat about 1,200 people, and will also house administrative offices, mulitpurpose classrooms, and various other amenities and services.

Awesome! I’m all for supporting our troops. They fight for our freedom and deserve all the recognition they can get.

But according to the Citizens Against Government Waste database, the project received $14.4 million in funding from the federal government.

Whoa … Wait a second. For those math buffs out there, that’s a $6 million difference.

My spidey senses are tingling, and I’m detecting some wasteful spending.

Logic left behind, or no logic at all?

Another educator attack on No Child Left Behind has just been published in the Courier-Journal.

Disputing what NCLB shows, Louisville high school teacher Noah Cooksey claims the Long Term Trend data from the National Assessment of Educational Progress (NAEP) show “Today’s students outperform their counterparts from 40 years ago at every age level in both reading and math.”

Well, that just isn’t so.

“The average mathematics score (in 2008) for 17-year-olds was not significantly different from that in 1973.”

When it comes to the Age 17 data, Cooksey doesn’t know what he is talking about.

It gets worse. Click the “Read More” link to see that.

The NAEP report includes graphs of the Long Term Trend data for the entire period Mr. Cooksey discusses. Here is the reading graph, cut and pasted directly from the NAEP report card (click on the graph to enlarge, if necessary). 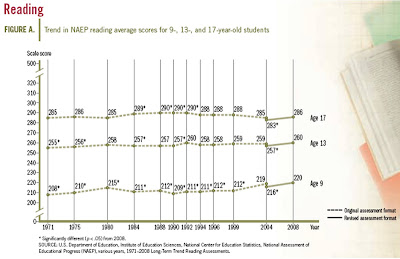 Notice that the Long Term Trend NAEP saw some changes in 2004, but the people who run the NAEP consider the more recent scores (shown with solid lines) to be generally comparable to the earlier data (dashed lines) and report all the reading data together on this graph.

In particular, you don’t see an asterisk on the 1971 score for Age 17 students because the one-point score difference is not statistically significant. This tiny difference is meaningless and could be entirely due to sampling errors; so, the NAEP report refuses to say the 2008 score is significantly higher than the score in 1971.

Cooksey fusses about people who think our schools are in crisis. Well, look at the Age 17 scores for 1988, 1990, and 1992. Scores for those years ARE statistically significantly higher than the 2008 Age 17 reading score. So, high schools in the United States did indeed LOOSE ground in reading over the past two decades. With a large proportion of our students arriving at college with inadequate reading skills, the last thing we need is for our high schools to show deterioration in this critical area. Is this a crisis? Maybe.

Side note: Cooksey says the Long Term Trend NAEP is given every four years, obviously another error on his part. In fact, this assessment has been given at highly irregular intervals throughout its history. You begin to wonder if Cooksey knows anything about this federal testing program.

Now, look at the Age 13 reading data. The 2008 score of 260 is the same as the score back in 1992. So, reading performance for middle school students on this NAEP series has been flat for almost two decades, too.

Here is the same sort of depiction, this time for the NAEP Long Term Trend math scores. 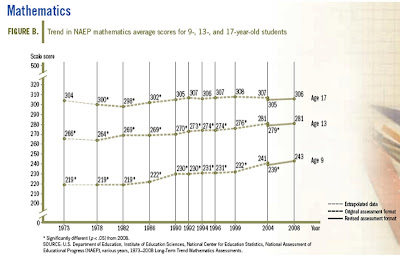 Once again, there is no statistically significant difference in the Age 17 scores between 1973 and 2008. In fact, the high school level math scores have been flat since 1990. That helps explain how the US is sliding in international rankings for mathematics and science performance at the high school level. That is a serious situation as more and more high tech jobs are leaving the US for foreign shores.

We have made some progress in the lower grades in math, but not that much. Sadly, we have not been able to capitalize on that in our high schools, and what really matters the most is the final product of our school system.

Certainly, the stagnation in our high school performance is a serious situation that warrants some very aggressive attention – given the significant foreign education competition, a situation serious enough that some might feel inclined to call it a crisis. By the way, the TIMSS testing that Cooksey mentions only covers grades 4 and 8, so it won’t show this crisis. How clever of him to overlook the high school results from PISA, the “Program for International Student Assessment,” which does look at high school math and science for Age 15 students (Primarily 10th graders).

Here is how we did on that according to the National Center for Education Statistics (Note: OECD is the Organisation for Economic Co-operation and Development):

“In PISA 2006, U.S. 15-year-old students’ average mathematics literacy score of 474 was lower than the OECD average of 498, and placed U.S. 15-year-olds in the bottom quarter of participating OECD nations, a relative position unchanged from 2003.”

“In PISA 2006, U.S. 15-year-old students’ average science literacy score of 489 was lower than the OECD average of 500, and placed U.S. 15-year-olds in the bottom third of participating OECD nations.”

To sum up, when you look at the real situation for the end-product performance of our students on the Long Term Trend NAEP, it certainly seems like education nay-sayers – and maybe even some of the bad news from NCLB – have it a lot more accurately than teacher Cooksey.

Gov. Beshear champions ‘It’s all about who you know’ policy to escape personnel axe

Beshear is asking the Kentucky Personnel Board to exempt 81 political appointees from a new budget-cutting law that would abolish their jobs on Dec. 31.

How many special jobs can a governor provide to “friends?” Apparently 856 — the number of Beshear’s political appointees on the state dole as of Sept. 29. Incredibly, that number had increased by 30 from last winter when the Kentucky General Assembly tried to force him to reduce that number.

Kentucky’s budget is in tough shape, requiring cuts in funding for programs and non-politically appointed state workers, yet this governor seems determined to protect his political pals — even if 10 percent of Kentuckians are unemployed.

Here’s some questions that need to be asked and answered before the personnel board renders its decision on Dec. 10:

* What if these political appointees had to earn their job everyday like people in the private sector?

* What if the governor had aggressive transparent goals to be accomplished and made his personnel decisions based on actual measurable performance of the people ‘accountable’ to achieve those goals?

* Who’s going to make the tough decisions when the reality hits that the feds can’t print anymore money to bail out Kentucky?

Let’s look on the governor’s award-winning transparency site and see if the answers are there. Oops. Not there. It appears that business-as-usual cronyism rules the day.

BUT, it took federal pressure to make this happen

They are waking up in Iroquois High School in Louisville. This perennially low performing school is now calling out to the community for help. Iroquois also is finally recognizing that poverty cannot be used as an excuse if you want to improve performance of poor kids. You have to adopt a school culture that insists these kids can learn despite poverty, if they get the right help.

According to the Courier-Journal, only 38 percent of the school’s students are proficient in reading and a dismal 15 percent meet math standards. The dropout rate of 40 percent is terrible, and only 10 percent of those who do graduate are ready for college and careers.

So, the school is reaching out to the community for help and support, which is great.

What isn’t great is the fact that it took so long for educators in Louisville to wake up to the seriousness of the situation and admit that, despite the poverty challenge, these kids can learn.

Another thing that isn’t great is that it took the federally mandated Persistently-Low Performing School program, which some in Louisville still fuss about, to create this new awakening.

What may be the most disturbing of all, however, are comments made by Jefferson County Board of Education member Linda Duncan.

While I salute her for showing up at the school’s public outreach meeting, I am having problems with her excuses. She doesn’t like the accountability system that identified Iroquois, claiming the problems are caused elsewhere because the kids arrive at this high school unprepared.

That’s right. Those kids in Iroquois were failed long before high school.

BUT, Ms. Duncan, you are responsible for the elementary and middle schools that feed Iroquois. Are you taking action in those feeder schools to create an Iroquois-like wakeup call there, as well?

Maybe Ms. Duncan talked about that but the Courier just didn’t pick it up. I’d like to know, if Ms. Duncan or one of our readers can inform us.

You see, it’s obvious that the problems in Iroquois and a lot of other poor-performing high schools didn’t start there. And, trying to fix those problems just by concentrating on Iroquois isn’t very likely to provide a high-quality solution, either. Louisville has system problems, and it needs system leaders who can grasp and deal with that fact.