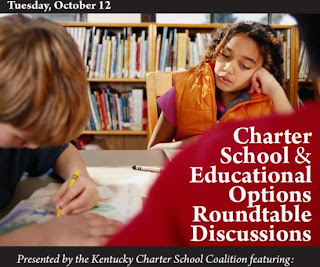 Richard Innes, the Bluegrass Institute’s education analyst, will present information on the current performance of Kentucky’s public education system at forums being held Tuesday in Lexington and Louisville.

The Louisville Forum, hosted by the Kentucky Black Alliance for Educational Options and the Kentucky Educational Restoration Alliance Inc., will be held at the NIA Center, 2900 West Broadway Street, from 5:30 p.m. to 8 p.m.

The forums will also feature presentations from Ken Campbell, president of Black Alliance for Education Options (BAEO), Todd Ziebarth, vice president of state advocacy and support for the National Alliance for Public Charter Schools and Jeff Reed, state program director for the Foundation for Educational Choice.

Both events are free and open to the public. Anyone concerned about the future of public education in Kentucky should plan to attend.

The state reports the good news that revenues are up in September as the economy starts a slow recovery.

Of course, many local school boards already raised taxes at the maximum rate they were allowed to go without a vote by local residents. Want to bet if any of those raises get repealed if the revenue stream continues to improve?

There are multiple news reports here and here that the ACT, Incorporated is investigating “potentially compromised test scores” at the Perry County Central High School.

Tests involved include the PLAN tests for 2009 and the ACT given in 2009 and 2010. PLAN is given to all 10th grade students in Kentucky, and all 11th graders take the actual ACT college entrance test.

The sketchy reports say student cheating is not suspected. The issue apparently surrounds testing administration procedures. Some of the suspected issues may involve administration of tests with special accommodations to students with learning disabilities. However, it is reported that all the 2009 test scores have been cancelled, and students will be offered a chance to retest.

The ACT indicates there is no specific time frame for concluding such investigations.

I did a quick check of the changes in ACT Composite Scores for 11th grade testing in all Kentucky high schools between 2008 and 2009. Perry County Central High School had the sixth largest increase in the state, although a few other schools had even larger increases.

However, large score changes are not unusual in small high schools, and all the schools that exceeded Perry County Central High School’s change between 2008 and 2009 are small. None tested more than 75 students in the 2009 eleventh grade ACT administration.

Jim Waters, Bluegrass Institute vice president of policy and communications, will speak tomorrow at a Louisville TEA (Taxed Enough Already) Party rally, which will be held from 4 p.m. to 6 p.m. at Jefferson Square.

It’s time to be Americans first

At times it is difficult to appreciate what you have until you are in the process of losing it:

[youtube=http://www.youtube.com/watch?v=JVAhr4hZDJE?fs=1]
Our Constitution is being subverted. Our liberty is being undermined. Massive government is crushing our individual freedoms.
Now that America’s losing its freedom, will Americans begin to appreciate it enough to make a difference?
You decide: Support truth, justice and the American way — or not.

Taxpayers save over $1.5 million as PLA in Carter County school project is rejected

In a big win for taxpayers and free competition, a restrictive “Project Labor Agreement” (PLA) has been removed from a new request for bid on the proposed Tygart Elementary School in Carter County.

Formerly, in an action that amounted to a breech of free trade bidding on the school project, the Carter County School Board had inserted the PLA, which essentially required any contractor who bid on the project to either only hire union workers or to pay non-union workers at union rates.

This triggered a lawsuit on behalf of independent contractors who charged the PLA was designed to force all workers into a union while excluding all non-union contractors from bidding.

While that suit was still in process, a round of bids was opened where all exceeded the $12 million budget for the school. As a consequence, the local board voted to reduce project scope, remove the PLA, and to rebid against a new budget of only $10.5 million.

This is a win on a key Bluegrass Institute initiative: We oppose PLAs as inappropriate governmental interference with free market competition. PLAs bias bidding towards union contractors while running up costs for government projects without providing any extra return on investment.

For more on PLAs and why they are wrong for Kentucky, see Jim Water’s excellent column here.