“The government is making money because it now controls so much capital, but it is robbing that money from the private economy in the process. It is never a good sign when your central bank is a national profit center.” –-Wall Street Journal

This latest from the Kentucky Enquirer mentions highly questionable spending (earlier identified as using tax dollars to purchase such things as flowers and back massages for water district staffers) by the Northern Kentucky Water District, which even the state attorney general’s office indicates “are, at best, uncomfortably on the border of a lawful action.”

Another shocker in the Enquirer’s article:

“Unlike in some other cases, Attorney General Jack Conway’s office did not hire its own experts to examine and challenge the water district’s need for all or part of the rate hike.”

It’s Conway’s job to represent the public in such hearings. He’s not a municipal water supply expert. Without outside experts, how could he possibly know, even if complex technology changes required by unfunded mandates from Washington do have to be implemented, whether the actual costs claimed by the water district are accurate?

The rate hikes under review in Northern Kentucky will set precedents for all subsequent water company rate hike requests from other regions of the state. This initial process needs a full and thorough examination; so far, it isn’t getting it – except for Tea Party activists.

KERA short-changed Kentucky’s teachers – but not their union!

We promised that our “KERA @ 20” reports would be living documents with updates and expansion coming in the KERA Portal where you can access everything from one page.

One of those recent updates is titled “Teachers Didn’t Get a Fair Share of Kentucky’s Education Funding Increase,” and you can access it by clicking on this title in the “See Also” section at the bottom of the KERA Portal.

Here are some facts:

Between the 1989-90 and 2008-09 school terms, total expenditures in Kentucky’s school districts rose by 54.9 percent in inflation-adjusted dollars, but the average Kentucky teacher’s salary only rose 12.6 percent in real dollars. 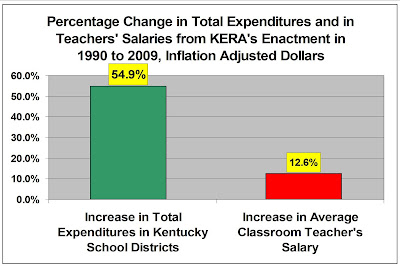 Where did the money go?

I know where some of it went. Non-teacher staffing in our schools rose by 59.4 percent between the Fall of 1989 and the Fall of 2007, while the number of Kentucky classroom teachers only increased by 21.8 percent (Sorry, I don’t have more current figures right now). 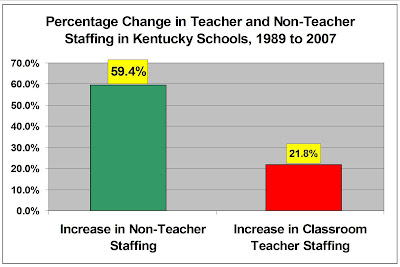 So, teachers in Kentucky didn’t fare that well under KERA. But, I suspect the unions did better. A notable proportion of the non-classroom teacher positions are in areas like curriculum specialists, assessment coordinators, and other skills that often are unionized positions. All of those extra union positions generate dues money for the union, but they don’t do a thing for raising the individual teacher’s salary.

Think about it, taxpayer. You put up 54.9 percent more in real dollars, but teachers only got a 12.6 percent raise. Do you really think that is the way to attract high-quality candidates into teaching careers? And, do you think the creation of a lot of featherbedding non-classroom jobs does a lot to improve education where it matters – in the classroom?

Was JCPS superintendent’s problem really ‘a failure to communicate?’

He called a Louisville Courier-Journal editorial claiming Berman’s main problem was a failure to communicate as “fatuous,” for which the synonyms “dull,” “dense” and “dim-witted” apply.

That’s the ticket. What we have here is failure to communicate. Same liberal excuse for Obama’s decline in popularity; the shellacking the Democrats received at the polls this month; and the rejection of the Obama/Reid/Pelosi socialistic healthcare and carbon tax agendas by the American public. Maybe if we’d just have explained ourselves to the ignorant lumpen proletariat in words of one syllable, they might have understood the wisdom of leftist government.

And Shelly Berman should have done a better job of explaining to Louisville’s unhappy and disgruntled parents that “…busing is a fact of life in 21st Century urban education;” despite the facts that: Busing is strongly opposed by the majority of students and their parents; It violates state law requiring neighborhood schools; It violates rulings by the U. S. Supreme Court; and it has failed to make any measurable improvement in the education of our children

Of course, it’s hard to explain something to people when you are out of town and out of contact.

McAdam also pointed out that Berman’s international travels – in which he was away from his post for 40 working days, or two full months out of 13 months – occurred while “only 33 of the system’s 133 schools met No Child Left Behind goals, a 13% drop from last year.”

Berman also missed every single graduation in the district. It should tell you something that the media and the Jefferson County teachers union continued to defend this incompetent educrat right up to the moment the JCPS School Board voted not to renew his contract.

In a way, Berman’s actual departure is sort of a non-event. Except for messing up the busing
situation and a politically correct but “parent-ally” unpopular student-assignment plan, he’s been gone — more or less — since he started.

He is putting the interests of New Jersey’s kids ahead of the self-aggrandizing teachers unions and educrats in the schools of education who have yet to move from lah-lah land into the realm of reality.

I wonder when Kentucky’s governor and education officials charged with reforming the commonwealth’s education system might also be making that move.