In recent months, the Environmental Protection Agency (EPA) has acted with unprecedented encroachment, circumventing the law with more stringent regulations for the coal industry. In early October, the EPA blocked 11 water permits in the Appalachian region.

Yesterday, Kentucky responded. Gov. Beshear and the Kentucky Coal Association filed suit in a federal court in Pikeville.
“Once again the EPA is overstepping its bounds and harming the coal industry in Kentucky,” Kentucky Coal Association President Bill Bissert said.
Beshear defended the commonwealth’s action by stating that Kentucky had tried to work with the EPA but failed to find common ground. He called the EPA’s actions “arbitrary and unreasonable” and said they could have a “devastating impact” on Kentucky’s economy.
The administration is to be commended for taking seriously its obligation to protect the sovereignty, constitution and citizens of this commonwealth.
What’s next? A lawsuit filed by the Beshear administration pushing back against Washington’s unrestricted and unwarranted involvement in Kentucky’s health care policies?

For more than three decades, the United Negro College Fund’s mantra has been:

“A mind is a terrible thing to waste.”

Isn’t this true for all of Kentucky’s children?

We have spotted an anonymous comment that may not have properly posted to our October 15, 2010 article, “Contentious water rate hike brings out angry residents in Northern Kentucky.”

At this point, we are uncertain if the poster was somehow able to delete the post or if Blogger malfunctioned.

If you are having technical problems with comments, please let us know at innes@bipps.org or lmorford@freedomkentucky.com.

KY education dollars are not spent where you think!

UncategorizedBy Jim WatersOctober 18, 2010
The brighter the research shines, the darker the hole of wasteful spending in Kentucky’s public schools becomes. Half of all education spending – by far the largest single item in the state budget’s General Fund – is spent for unnecessary personnel, unproven programs and unwelcomed experiments. When will this end? 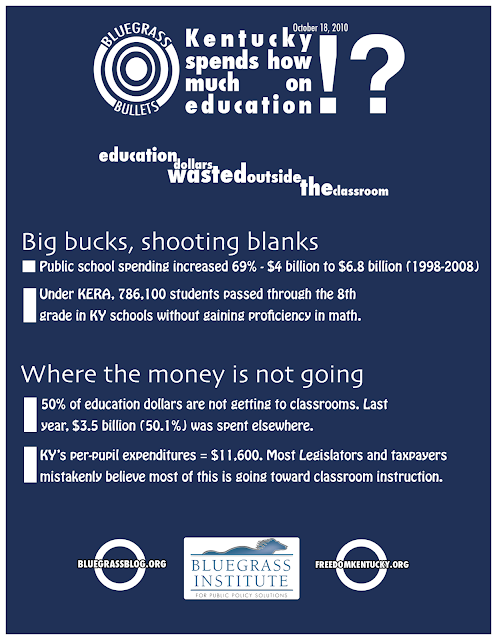 A new report from McKinsey & Co. is going to generate discussion along with lots of fussing from the US teachers corps and those who train teachers.

An Education Week article summarizes some of the McKinsey findings:

• Singapore, Finland and South Korea draw 100 percent of their teachers from the top 1/3 of the college academic pool
• In the US, only 23 percent of our teachers come from the top 1/3 of college students, and in our high poverty schools, its only 14 percent
• Teacher retention is a problem in the US, where 14 percent leave every year overall and 20 percent leave each year in high poverty schools. Overseas, annual losses are only 3 percent in Singapore and 1 percent in South Korea.

Salaries are an issue. Overseas:
• Teachers get retention bonuses of $10,000 to $36,000 every three to five years in Singapore
• Teachers get merit pay bonuses and increases of 10 to 30 percent of base pay

Certainly, as this graph from the McKinsey report shows, a very large proportion of US teachers comes from the lowest third of the college talent pool. In the US, nearly one out of two teachers (47%) comes from the bottom 1/3 of the ACT/SAT scorers. 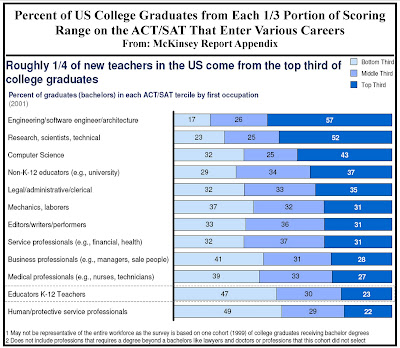 Per Ed Week, the McKinsey authors say, “More than half of teachers (in the US) are trained in schools with low admission standards; many accept virtually any high school graduate who applies.”

Education Week interviewed Kate Walsh, president of the National Council on Teacher Quality, who supported those McKinsey findings. Says Walsh, “It’s easier to get into ed. school in the U.S. than it is to qualify to play college football.” Ms. Walsh added that most college sports programs require a minimum grade point average and SAT score, while some teacher-preparation programs don’t set such entry standards.

Quite naturally, complaints about the report have already started, and you can find some of them in the Ed Week article. More will certainly come as the McKinsey report adds more evidence that merit pay is a part of the success story in high performing education programs in foreign countries.

You can access the main McKinsey report and a separate appendix from links here.

As reported by the Kentucky Enquirer an angry, frustrated group of Northern Kentucky citizens let the Kentucky Public Service Commission (PSC) hear how they felt about a huge, 25 percent increase in water rates loud and clear.

Overall, the meeting wound up with the PSC looking both citizen hostile and rather inefficient all at the same time.

As this first video shows, PSC Chairman David Armstrong started the meeting by explaining that the Northern Kentucky Water District petitioned the PSC for the huge rate increase in large measure to cover new Environmental Protection Agency (EPA) unfunded mandates and to repair aging equipment that has been in the ground for as long as 100 years.

But, testimony from citizens didn’t even start before the commissioner got himself in trouble by outlining the commission’s awkward, citizen unfriendly rules that would be followed during the meeting.

By the time the first citizen actually got to the microphone, the air was electric with the tension of extreme aggravation. As this next video shows, that tension wasted no time in surfacing in comments from a chemical engineer and a civil engineer, both with water treatment experience. Both took liberal shots, not only at the rate hike, but also at the science undergirding the EPA’s new rules. They continued their attacks by criticizing the apparent cave in of Kentucky’s leaders who should have protected the state’s citizens by protesting the regulations in Washington.

As you can see in the second video, as it attempted to duck responsibility for the failure to protest the EPA’s rules, the PSC pointed fingers at both the Kentucky Attorney General and the Kentucky Water Commission, claiming those agencies have the responsibility to protect individual citizens and to deal with the EPA.

Even that duck didn’t work out too well for the PSC. Angry citizens wanted to know why the Kentucky Water Commission was not represented at the hearing.

The PSC’s response just poured more gas on the fire. The PSC said this was a rate hearing, not a water quality hearing, an excuse that immediately fell flat with attendees. Angry citizens immediately pointed out that water quality was a major justification for the rate increase and was highly relevant to the discussion about whether the increase was justified. Before citizens could intelligently comment on the rate hike, they needed access to that technical information.

Overall, as the Enquirer points out, citizens came away angry not only about the proposed rate hike, but they also left the meeting with a new-found healthy distain for the way the PSC conducts hearings.

Clearly, not only do responsible Kentucky agencies need to get some spine and start questioning EPA’s unfunded mandates, but the PSC better give some serious thought to the way it conducts business, as well.

Clearly, the people who attended the hearing don’t seem likely to forget these matters. They know they may soon see a 25 percent increase in their water bills if they do.