No, the goal in NAEP is NOT for kids to score only “Basic”

Education apologists in Kentucky still refuse to admit it, but a lot of experts now understand that our education system needs to strive for much higher student performance than we are currently getting.

The governing board doesn’t consider the lower score of NAEP “Basic” to be a suitable performance target. NAEP “Basic” only signifies partial mastery of subject material. Per the board, that’s not good enough. “Proficient” is the goal, and nothing less.

But, education ‘status quo’ers’ like Jefferson County Teachers Association president Brent McKim don’t get that. They don’t want you to know it, either.

Offering up a big smoke screen of nonsense that mistakes what is for what needs to be, McKim told the Kentucky Tonight audience on Monday that NAEP “Basic” is fine target. Basically, McKim claimed that partial subject mastery is an acceptable target for him.

Well, setting unrealistically low education goals only works for status quo educators who don’t have a clue about what our kids are going to need to compete in the increasingly more competitive world economy.

However, setting unrealistically low goals is not in line with what the people who actually run the national assessment are telling us. So, one last time, the people who govern the NAEP have spoken, and they are telling us to shoot for NAEP “Proficient,” not something less.

Key Kentucky educators constantly try to tell us about all the remarkable progress that has been made in our schools. Sadly, that clearly isn’t correct.

Here is a graph from our recently released KERA @ 20 report that guts those educator claims. 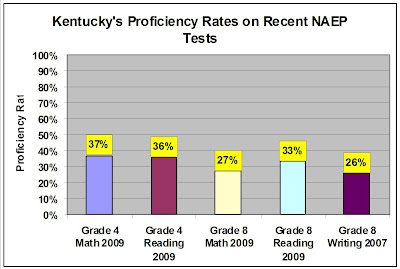 As you can see, after almost two decades of KERA activity in our schools, only about one in three students scored proficient in reading and math in fourth grade. For eighth grade math and writing, the proficiency rate is even lower, only about one in four students.

This is all our educators have been able to achieve in the past two decades of expensive reform efforts. So, it is very obvious that it will take many decades more decades to get to the proficiency levels our kids need, given the depressingly low rate of progress to date that only produced the mediocre results shown in the graph.

I’m not the only one who is fed up with the low academic performance of Kentucky’s students. Yesterday, the Jefferson County Board of Education gave Sheldon Berman, the district school principal, his walking papers, effective at the end of the school term.

In explaining that action today to Louisville’s popular WHAS Radio talk show host, Mandy Connell, Jefferson County board chair Debbie Westlund said the board wants a change in focus to emphasize academics. Clearly, Westlund and her board understand graphs like the one above, and its important implications for children, a lot better than the high-paid professional educator they hired.

It happened on last night’s (November 23, 2010) Kentucky Tonight broadcast on charter schools when Brent McKim, head of the Jefferson County Teachers Association said “we’ve made remarkable progress” about four minutes into the program (KET Program #1804, not yet available on line).

And, soon to be released Sheldon Berman told the Courier-Journal on November 7, 2010 that the district “produces many outstanding results.”

Well, a lot of informed Kentuckians have grown tired of those inflated proclamations.

Very simply, educators who keep claiming such nonsense just undermine their own credibility. In Berman’s case, that credibility has clearly run out.

Now Kentucky is in the business of ‘ordering’ private companies?

Kentucky’s Insurance Commissioner Sharon P. Clark has decided that the decision by insurance companies in the commonwealth to discontinue the writing of new child-only policies because of increased regulations is unacceptable. So she’s ‘ordering’ these companies to continue selling them.

This story is not new to the Bluegrass Institute. Jim Waters, vice president of policy and communication, reported on it in his statewide column last month. Waters quotes Peter Suderman of Reason Magazine: “Insurers are expected to both abide by new rules, which could prove costly, and not significantly change their prices or services in response to them.”
So now what happens when companies wake up to see that the new health care reform will wreak havoc on their business? Kentucky’s Insurance Commissioner forces her will to get her way.

These two separate efforts are trying to create assessments of student performance for all the states to evaluate performance against the new Common Core State Standards.

Those Common Core State Standards were developed by a partnership of the National Governors’ Association and the Council of Chief State School Officers. Kentucky rushed to adopt those standards before they were even finalized in a failed effort to win some Race to the Top money.

Unfortunately, both of the new test creation efforts seem to be headed down the same dead end streets that Kentucky’s now failed KIRIS and CATS assessments traveled.

Both of the Common Core State Assessment creation teams are talking about using a lot of open-response written questions and even “performance tasks/events.” That’s very disturbing because Kentucky’s history in those areas, as the new Bluegrass Institute reports show, is very unsatisfactory. Inaccurate scoring, high expense, slow results turn-around, and outright failures were rampant with some of these ideas.

You can read about the many concepts and issues concerning the new assessment creation activity in two new freedomkentucky.org Wiki items.

The first one is for the Partnership for Assessment of Readiness for College and Careers (PARCC) effort.

The second one covers the SMARTER Balanced Assessment Consortium.

We think these efforts have a lot of unfinished homework, and a good part of that needs to include a thorough study of our new KERA at 20 reports.

For sure, if they intend to use a lot of open-response questions and performance event items, the people doing PARCC and SMARTER need to tell us, in great detail, how they are going to avoid the mistakes and failures that plagued not one, but two now-failed Kentucky assessment systems.

Berman out as Jefferson County superintendent!

Around 9 p.m. on November 22, 2010, the Courier-Journal announced that the school board in Kentucky’s largest school district, the Jefferson County Public School District, voted not to renew its contract with school superintendent Sheldon Berman.

Berman’s leadership was seriously questioned this fall when his very unpopular school busing plan to achieve integration created chaos in the lives of five year old students throughout the district.

The recent announcement that a significant proportion of the schools in the second listing of Kentucky’s Persistently Low-Achieving Schools came from Jefferson County highlighted more questions about Berman’s leadership.

The story with a video clip can be found here.

That coverage can be found here and here.