The Courier-Journal reports that Kentucky Governor Steve Beshear told reporters at his annual end-of-the-year news conference that he will try to get the Kentucky House and Senate to agree on a new bill to create charter schools in Kentucky.

Last year, the governor stayed out of the fray as charter school legislation was discussed, but not adopted, in the Senate while a charter bill was introduced, but ignored, in the House. Kentucky Senate President David Williams, who may oppose Beshear for the governor’s seat in next year’s election, blamed the loss of federal Race to the Top money on Beshear’s inaction on charters in the 2010 legislative session.

Clearly, as Kentuckians, including our governor, learn more about charter schools, support for these innovative schools is growing in the commonwealth.

What will the new Kentucky school assessment system look like?

The Kentucky Board of Education had a two-day meeting on December 7 and 8, 2010 which devoted major time to discussions about Kentucky’s new school assessment program, scheduled to launch around 2012.

There is still a lot of work to be done, and many decisions left to be made, but some key points are starting to emerge, as this Kentucky School Boards Council news release points out.

Unlike the program with the CATS assessment, at present there are no plans for score subdivisions for the four score categories.

The current board has apparently decided Kentucky has had enough of lauding small amounts of progress. The board is sending a signal that it is time to get on with the mission of reaching proficiency, not something less (Jefferson County, are you listening?).

The ink is hardly dry on Michelle Rhee’s resignation letter from the chancellor’s position in the Washington, DC public school system, but no moss is growing under this high energy lady’s feet!

She is announcing plans to form StudentsFirst, a new lobbying organization that will challenge the education employee unions’ current lock on school politics.

Rhee is planning big – one billion dollars big – and one major player, Eli Broad, a well-known Los Angeles philanthropist is already on board.

I’ll bet a lot of union activists in DC are already wondering if they achieved a Pyrrhic victory when their heavy political activism led to the ousting of the mayor who appointed Lee to her DC schools job. That union political win ultimately led to Lee’s resignation.

Now, Lee is coming back at the unions in a way that could cost these employees first/kids second organizations millions.

Quote of the day: ‘These kids have one shot at second grade’

“I think that you can’t use other excuses like the economy to put off doing what’s right for kids. These kids have one shot at second grade. They’re not going to be there again, and if we say, ‘Sorry, we didn’t have time to pay attention to you until you were out of college,’ then we have done a tremendous disservice to these kids.” –Joanne Weiss, chief-of-staff to Secretary of Education Arne Duncan

Owensboro’s Messenger-Inquirer gets it

The Messenger-Inquirer writes in “Schools need reliable accountability” (subscription) about the editorial staff’s frustration with a proposal from the Kentucky Department of Education to ask for a waiver from No Child Left Behind (NCLB) accountability so the state can lower accountability standards, again. The paper correctly points out that we have already done this twice, first scrapping the KIRIS assessments, and then dumping the CATS assessments. In the process, the firm promise from our educators to provide dramatic improvement by 2014 has vanished into thin air.

Except for NCLB, no-one is talking a 2014 target date anymore.

“But it’s time to determine what the standards will be, set goals with firm deadlines, and then continue on that path long enough to determine which schools are succeeding, which are broken, and what needs to be done to fix them. Otherwise, we’re just left with a bunch of test scores, but no real accountability.”

Even the Prichard Committee agrees!

In what looks like a clumsy attempt to get the Jefferson County Board of Education to override its vote to replace the school district’s superintendent, Sheldon Berman, the Courier-Journal’s editors have managed to impressively demonstrate their blindness to the plight of their own readership’s children.

On Sunday, December 5, 2010, the Journal’s editors published “Stop and Think,” a major diatribe against the recent school board action.

“The sudden decision to oust Dr. Berman gives the impression — to parents, to students, to teachers and to prospective employers who might move to Louisville — that Jefferson County’s public schools are stagnating or in decline. That is quite simply not the case.”

Among other items the paper mentions to support this broad-sweeping assertion is a claim that “percentages of students testing proficient in basic academic skills have risen steadily while students rated novice have dropped sharply.”

That nonsense immediately brought fire in the Prichard Committee for Academic Excellence’s blog here and here.

Let’s add a bit more to what Prichard has to say.

This table (click on it to enlarge, if needed) shows the proficiency rates for elementary schools on Kentucky Core Content Tests (KCCT) by subject and test year.

It starts with 2007 data, which was the last school term prior to Berman’s arrival in Louisville.

Note that between 2007 and 2010 Jefferson County’s performance (area shaded in yellow) fell in every subject area except math.

On the same table I also show the statewide average proficiency rates (shaded in light blue) for the same subjects and test years.

I then calculate the gap between the state proficiency rate and the rate in Jefferson County in the area shaded pink. Note the district’s elementary schools have fallen farther behind the state average in every area in the past four years, often sinking to double-digit gaps.

Now, we know the KCCT, particularly in high schools, does not give us a good picture of how well our schools are preparing our students for college and careers. That is why the KCCT program is being disbanded in another year in favor of better tests aligned to those student needs.

Some of those replacement tests are already in use in Kentucky. They are the ACT, Incorporated’s EXPLORE, PLAN and ACT tests, which are now given to all eighth, 10th and 12th grade students, respectively. We started using EXPLORE and PLAN with all students in 2007, and the ACT was first given to all our 11th grade students in 2008. Here is how those test results look for Jefferson County Schools versus the statewide average scores. 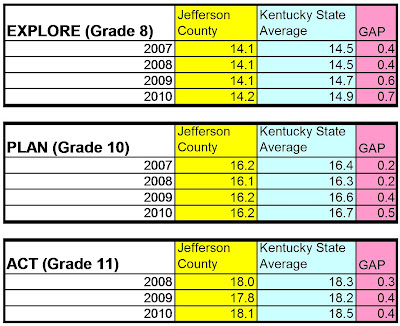 At best, progress has been terribly slow in Jefferson County, with no progress at all in the PLAN scores.

There is an additional consideration for the high school scores, which tends to hide even more of Jefferson County’s gaps.

Because a higher proportion of the district’s kids drop out by 11th grade, that tends to inflate the district’s PLAN and ACT scores more than the state’s high school scores get boosted from dropouts.

Worst of all, the district is falling behind the rest of the state more and more over time. The Jefferson County – Kentucky gaps for EXPLORE, PLAN and the ACT are growing.

Finally, the editors at the Courier have the audacity to label NCLB a “one-dimensional” assessment while they jumped all over the dubious high school rankings from Newsweek magazine.

At least NCLB looks at all kids.

Newsweek, by comparison, only looks at kids who take Advanced Placement courses, totally ignoring the rest of each high school’s students as well as a huge, but often very different, percentage of students who drop out of various high schools. Thus, in a sense, Newsweek’s assessment of high school quality is less than even one-dimensional, but that didn’t stop the Courier!

By the way, according to Newsweek, the very troubled Holmes High School in Covington, Kentucky, actually makes it into the listings!

I won’t show them here, but just take a look at Holmes’ performance on anything from ACT, PLAN to even CATS testing, to see how very out of line Newsweek’s rankings actually are – except to the ‘less-than-one-dimensional’ fans at the Courier. Holmes is also one of the first schools in the state to loose it’s School-Based Decision Making Council due to CATS scores! But, don’t tell Newsweek!

So, I agree with the Prichard Committee on this one. The Courier’s editors got it wrong. VERY wrong! And, the Courier does a great disservice to their readers by trying to mislead them about the really marginal performance of this troubled school system. The kids of Jefferson County deserve better.