Gov. Beshear wants lawmakers to shift $167 million from next year’s Medicaid budget to this fiscal year so the state can “draw more federal matching money for Medicaid from federal stimulus funds,” according to the (Louisville) Courier-Journal.

But that same article points that if Beshear succeeds in this legislative maneuver, “it only postpones the need to achieve savings or make cuts in the program.”

Instead of decisively moving forward with an announcement of immediate and detailed cuts needed to right this ship, Beshear proposes doing little more than rearranging the chairs on the deck of Kentucky Medicaid’s sinking ship.

Kentucky now is so firmly planted on Washington’s teat that it has weakened its sovereign power and placed the future of the commonwealth’s economy — not to mention the individual liberty of its citizens — at great risk.

Could we stand up to Washington even if those in charge of Frankfort’s political hen house wanted to?

The daily dose of links!

A new report from the Center for American Progress (CAP) is going to catch some attention around the country. As the CAP writes in the introduction:

“At a time when states are projecting more than $100 billion in budget shortfalls, educators need to be able to show that education dollars produce significant outcomes or taxpayers might begin to see schools as a weak investment. If schools don’t deliver maximum results for the dollar, public trust in education could erode and taxpayers may fund schools less generously.”

The CAP wades into that discussion, which we started in Kentucky years ago with our “Bang for the Buck” report, with new rankings of the efficiency of school districts around the nation in terms of test proficiency rates achieved versus per pupil dollars spent.

While the CAP findings are no surprise to us, they reinforce what we at the Bluegrass Institute have been saying for years: with education now absorbing such a huge percentage of the overall tax dollar, Kentucky simply cannot afford education systems that don’t produce efficiently for kids.

I’ll have a lot more to say about the CAP report, so stay tuned.

In the mean time, the CAP’s web site has a neat mapping tool where you can drag the map to show Kentucky, click within the area of the state, and then see how each district in the state shapes up in their efficiency rankings.

Here is one map I assembled that shows the worst Return on Investment (ROI) school districts – shown in red, to the best – shown in dark green, in Kentucky. 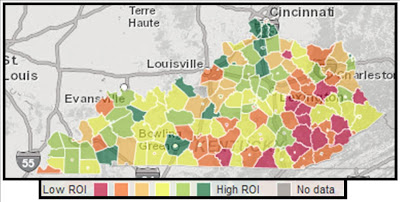 Check out how your school system performs with these tools, too.

Jim Waters, the Bluegrass Institute’s vice president of policy and communications, will appear on KET’s “Kentucky Tonight” on Monday, Jan. 24, at 8 p.m. (EST) to debate a proposal to enact a government-mandated statewide smoking ban.

The program is hosted by Bill Goodman live on KET and www.ket.org/live, and will be replayed Wednesday at 2 a.m. (EST).

Waters will be joined in his call to protect individual liberty and the property rights of business owners by Rep. Jim DeCesare, R-Bowling Green, who is leading an effort in the Kentucky House of Representatives to make government more transparent and accountable to citizens.

Other panelists include Rep. Susan Westrom, D-Lexington, the primary sponsor of the smoking-ban legislation–House Bill 193, and Amy Barkley, advocacy director with the Campaign for Tobacco-Free Kids.

What’s in a letter? 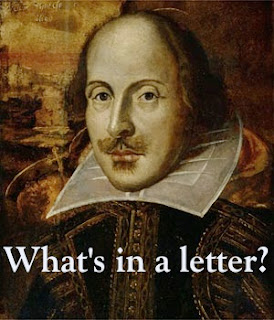 Juliet posed this question in Romeo and Juliet.  She explained, “that which we call a rose by any other name would smell as sweet.”

In Kentucky, I think we need to ask ourselves “What’s in a letter?”

Kentucky Education Commissioner Terry Holliday recently published a letter to the legislature stating that he hoped the legislature would continue to pressure the education establishment to abandon the status quo and look to the interests of children rather than adults.  This is a message that more bureaucrats, legislators, and teachers union leaders need to hear.

While Holliday makes a great point and expresses his concerns about the future of education in Kentucky, in the end, it is still just a letter.  Over the years there have been more than a few press conferences, task forces, studies, press releases, and public statements by those wielding power in Frankfort about how Kentucky’s education system needs serious reform.

Getting upset about the problem is not only the first step but the most simple.  The hard part is applying pressure to the system to force change through creating accountability at each level of the system, welcoming school choice to create competition, and by not lying to parents and students about achievement gaps via test score inflation.

Juliet said a rose by any other name would smell just as sweet.  An education system without accountability, transparency, and free-market options is just that.

Check out these links on this fine Wednesday: