Quote of the day: Education reform urgently needed in Kentucky, too

“When it comes to our children’s future, the real devil is not in the details. He’s in the delay, and 2011 is the year the delay must end.” —Indiana Gov. Mitch Daniels

Apparently BIPPS is about to be ‘balanced’ out 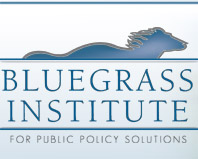 Yesterday a Herald-Leader columnist/blogger posted about a new think tank based out of Berea called the Kentucky Center for Economic Policy.  At the end of the post this statement is made:

Expect the Kentucky Center for Economic Policy to provide some progressive balance to the conservative Bluegrass Institute for Public Policy Solutions, based in Bowling Green.

Do we really need “balance” provided for the ideas of sound fiscal policy, accountability in education, and transparency in government? The Bluegrass Institute proudly stands behind these ideas.  We are proud to be Kentucky’s only free-market think that provides free-market solutions to Kentucky’s most pressing problems.  Does liberty need to be balanced? We don’t think so.

If you would like to help us continue our fight for these ideas, click here to make a contribution!

It’s time for a balanced-budget amendment

Kentucky’s families and state government must balance their budgets. Why shouldn’t Washington politicians be required to do the same?

A couple days ago, Bluegrass Policy Blog posted about Senator Rand Paul’s intention “to force members to read bills” in Congress. This seems almost so basic that we shouldn’t have to talk about it. I admire the effort but in the end I’m saddened by the fact that we are in a situation where it is common knowledge that our elected representatives often vote without reading the legislation.

Here are some potential solutions:

Our elected representatives have one job to do.  Regardless of what they claim to have on their plate, in reality there is one responsibility that is paramount above all others – to execute the will of the people.  Not get re-elected.  Not position themselves for post congressional careers.  Not network. Not fund raising.

So while the past election cycles saw issues such as whether someone voted for “Obamacare” or where they stand on the “Bush Tax Cuts” take prominence, perhaps we’ll hear this question in future election cycles:

“Candidate X, how many bills that you voted on during your previous term did you read in completion?”

On January 7, 33 Republican governors and governors-elect sent a letter to the White House with a clear message: repeal Obamacare’s Medicaid provisions.

One of the major provisions of the Affordable Care Act will expand Medicaid eligibility by 2014 and requires states to maintain eligibility or lose federal funding–which accounts for at least half of every state’s Medicaid budget. In order for states to comply with the required Medicaid expansion, they must consider raising taxes or significantly cutting other programs, most notably education.

Governor Rick Perry of Texas wrote, “The one-size-fits-all approach to healthcare adopted last year does not work in the states and imposes unnecessary financial burdens on already strapped state budgets. Now is the time for the federal government to restore states’ flexibility to craft Medicaid programs tailored to their specific needs.”

Every state’s population is unique, and each needs the flexibility to run its own programs in order to serve the needs of its citizens. The federal government’s continued over-involvement in Medicaid is another example, as Gov. Perry points out, of a one-size-fits-all approach that does nothing to help the very people the program is intended to help.

Kentucky currently faces a $100 million Medicaid budget shortfall. The Heritage Foundation estimates that Medicaid expansion will cost the state over $500 million to expand the program by 2014.

While Kentucky was absent from the states represented in this letter, the commonwealth is experiencing the same impending challenges to this state program already in crisis.

For smoking nannies, burning freedom is ‘a process’

We told you it was coming. It’s now here.

While the health nannies claim that “local ordinances have set the stage for statewide smoking-ban legislation,” what they really want to do is circumvent local ordinances that don’t go far enough to suit their big-government sensibilities.

“I’ve said all along everyone deserves protection, everywhere,” Ellen Hahn, a nursing professor at the University of Kentucky and director of the Kentucky Tobacco Policy Research Program, told the new Kentucky Health News blog. “I don’t think we’ll ever see local ordinances in every locale in the state. In some ways, it’s got to start some time and we’re on first base. It’s a process.”

Yes, it most certainly is. Chipping away at the constitutionally protected private-property rights of restaurant owners certainly is a process.

Putting the interests of getting big grants from leftist foundations ahead of our right to self-govern and take personal responsibilities for our own health and well-being certainly is a process.

Getting government into the bedrooms and living rooms, and even cars (House Speaker Greg Speaker, D-Prestonsburg, has floated the idea of Kentucky banning smoking in private vehicles) of private citizens is certainly a process.

A poll linked to earlier in this blog entry indicates “a clear majority” support surrendering their individual liberties to Frankfort, to which I am quoted in response:

“Just because a majority of people in some poll say they want more government nanny-ism doesn’t make it the right, or constitutional, action to take. The last time I checked, restaurant and bar owners’ constitutionally protected private property rights are not subject to polling. In fact, the constitution exists for the express purpose of protecting those rights from some popular movement such as that being pushed by Kentucky’s health nannies who want to deny Kentuckians their individual liberty to make their own decisions regarding smoking, eating and other lifestyle choices.”

Besides, while the issue being polled about today might indeed be politically incorrect — as smoking has become — how will the same constitutional illiterates expressing support for a ban in that poll respond when it’s an attempt down the road by a Hahn clone to use government force to deny them some favorite food because it’s too fattening, or some sport because it’s too rough?