Senate Bill 3 from the current legislative session was voted out of the Senate Education Committee this afternoon and now heads to the Senate floor for consideration tomorrow.

Among many who testified in favor of this bill included Jim Waters from the Bluegrass Institute, Pastor Jerry Stevenson of the Kentucky Education Restoration Alliance, Inc. in Louisville, Reverend Martina Ockerman from the Asteroids Organization of Lexington, and Martin Cothran and Andrew Walker from the Family Foundation of Kentucky. All did a great job pointing out the need for this bill using a wide variety of different examples.

Not everyone who testified at the meeting favored the bill. In particular, three members of the Jefferson County Board of Education spoke against the neighborhood schools bill, sometimes using some pretty shaky arguments.

For example, Carol Haddad, a member of the Jefferson County Board of Education, made the following comments, accompanied by a palpable share of emotion. Some of Ms. Haddad’s comments:

“In spite of some of the low test scores – and we know we have to deal with that, and we are dealing with that – Jefferson County Public Schools is a great place to be.”

“I just got a bad feeling when I watched here when I heard some of those speakers (say) that Jefferson County is the worst place to be. It is not. It is a good school system.”

Well, that’s not exactly what the speakers said, but at least one committee member wasn’t buying into that obvious Jefferson County denial syndrome problem.

Senator Alice Forgy Kerr, who actually voted against a charter school measure last year, now has decided to face some overriding concerns that Ms. Haddad, and plenty of others in Jefferson County, have yet to face. Said Sen. Kerr:

Kerr says we need to do something, and I agree. If not charters, then what?

So far, Jefferson County has wasted millions on busing over the past 40 years, but the schools in the West End are not materially improving, adults living in the East and West sides of town are still quite segregated, hence the continued demand for busing (after 40 years, if that was going to change, it would have) and thousands of students still get left behind.

When word got out that the Carter County school district was trying to limit competition by entering into a Project Labor Agreement (PLA) on the construction of a new elementary school, the plan got squashed. Here are some reasons why PLAs should not be allowed on any public construction projects.

Jim Waters, vice president of policy and communications for the Bluegrass Institute, will be speaking on charter schools at today’s Senate Education Committee meeting.

It’s no secret to Bluegrass Institute readers: we are upset with the way this state’s educators hid the fact that thousands of kids were being quietly pushed out the school door forever while those same educators consistently misled the public about the true crisis in high school graduation rates. We’ve been upset for a long time.

Now, the Kentucky School Boards Association reports on pages 8 and 9 of the January, 2011 edition of the “Kentucky School Advocate” that school districts are bracing for the fallout when more accurate graduation rate reporting finally hits the commonwealth in 2014.

Well, I am having a hard time sympathizing with Kentucky educators on this one.

Kentucky educators, you all went “wink, wink” year after year while you fed the citizens of this state inflated graduation rate figures that clearly were illusory.

The nonsense continued even after more accurate formulas to calculate and report this information were researched and made available by the National Center for Education Statistics way back in 2006.

The nonsense even continued after the Kentucky Auditor of Public Accounts looked at the state’s dropout and graduation rate reporting in 2006 and said there was serious inflation in the graduation rates and a significant understatement of the real dropout rates.

Furthermore, the department is only starting to get honest now because the feds finally forced them to do so.

In fact, due to the chronic lack of urgency on this issue, Kentucky will be either the last, or the second to last, state to finally provide its citizens with accurate graduation rate data.

So, don’t look for sympathy from me on this one. Our educators stood by and misled us for years, showing no sense of urgency to make improvements until the feds got nasty.

Even now, educators are fussing because the graduation rate formula chosen by the feds won’t count kids who take more than four years of high school to graduate as a success story.

While I certainly want our schools to hang in there for kids who need extra time, I think the feds believe it’s about time the taxpayer gets a little break in this. It costs a lot of extra money when kids have to be retained in schools for an extra year, or two. And, evidence we are starting to see from charter schools – such as this one in Chicago that took in a freshman class where only four percent were reading at grade level and four years later sent ALL of them, as graduates, to four-year colleges – shows that fussing about the federal requirements may be just that, mostly fussing.

Kentucky educators, you owe the commonwealth, and the thousands of kids you simply forgot, a huge apology. It’s time to stop whining and start winning for kids, instead.

Jim Waters, Bluegrass Institute vice president of policy and communications, will be on WBFI’s BBC morning show today from 8 a.m. to 8:30 a.m. (CST).

With the legislative session now in session, you may want to see if there are prefiled bills in specific areas of interest to you. Fortunately, the Kentucky Legislative Research Commission has such a feature, though it is somewhat cryptically named the “BR Index – Headings.”

Here is a snapshot of a portion of what you will find under the topic “Education, Elementary and Secondary.” 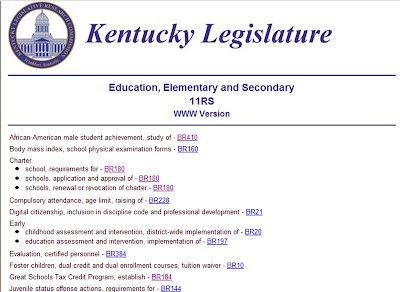 Now, if we can get something similar for the bills filed during the session, life will be really good.