So, is NCLB really impossible?

We’ve gotten a belly full of excuses and complaints from educators over the past few days about how No Child Left Behind (NCLB) is terrible and schools and school districts that have finally had to face some accountability are being treated unfairly. These whiny educators claim NCLB sets impossible goals.

Well, maybe not. Maybe, not even if you get identified as a low-achieving school.

The Kentucky Department of Education’s News Release 10-065 has some interesting information that undermines the whining from the ‘Educators in Denial Club.’ You see, two schools on the first Persistently Low-Achieving Schools listing last year have pulled up their performance and actually made Adequate Yearly Progress in 2010.

Here is a table from the news release that shows this interesting information. Check out the entries in the far right column for the Leslie County and Metcalfe County High Schools. 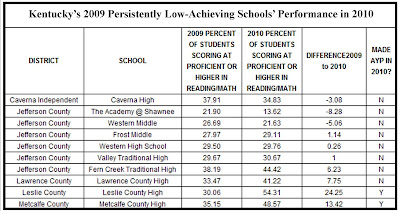 Both Leslie County High and the Metcalfe County High made double-digit improvements in proficiency rates between 2009 and 2010, enough to allow them to meet the 2010 NCLB targets.

Of course, not all schools did as well. Three, of which two are in Jefferson County (home of a dean of the Educators in Denial Club), actually suffered a decline in student proficiency in 2010 after they were identified as low performers for their 2009 math and reading performance.

Some will argue the identification as low-achievers didn’t come until fairly late in the 2009-2010 school year, which is true, but the administrators and teachers in those schools would have to be blind not to know they had serious problems even before the Persistently Low-Achieving School designations came along. Or, maybe they were to busy hanging out at the Educators in Denial Club, to notice.

Anyway, Leslie County and Metcalfe County show that getting out of NCLB trouble, even as a low-performing school, may not be impossible after all. It looks like the teachers in those schools stopped wasting time on denials and started getting down to helping kids.

Congratulations to both schools.

Now, please tell the rest of the schools how you did it, if you can get them to stop denying their poor performance long enough to listen.

United we pay, divided we save 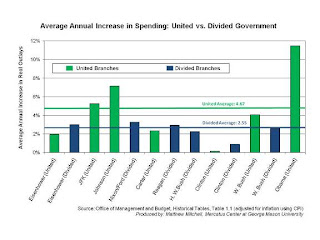 Sen.-elect Rand Paul has indicated that gridlock isn’t necessarily a bad thing, pointing out that debate is healthy and a divided government is less likely to spend money.

As it turns out, Paul is on to something.

That is big news for taxpayers, especially since the Kentucky Legislature and U.S. Congress will both be divided for the next term.

“Divided we stand, united we fall,” Thomas Jefferson once said.

As I read comments in the Winchester Sun about the Clark County District being named one of the state’s lowest performing school districts, I could not help recalling Mr. Brothers’ insightful – and all too accurate – quote.

• The Clark County District has been in trouble under No Child Left Behind (NCLB) ever since the bill took effect in 2002.

• Five years ago, the Kentucky Department of Education (KDE) sent an audit team to the district to figure out what was wrong.

• For the past four years, the KDE provided assistance teams to the district.

But, it has not helped, according to the district’s Assistant Superintendent, Pat Rosenthal.

• The district isn’t monitoring student progress in a systematic way.

• The district isn’t holding everybody accountable for making sure all students succeed.

And, finally, after years and years of KERA, Farris says:

“It’s just a fact that there’s the perception that some kids can’t learn, and we’ve got to change that thinking. Until we believe in our hearts that all kids can learn, we can’t change it.”

So, here are my questions right back.

• Why do we still have people in the school system with biased attitudes like that and who – after half a decade of effort – clearly are not going to change those attitudes?

• And, how can we talk about accountability in Kentucky’s schools when things like teacher tenure mean Farris can’t get rid of those people who, by her own admission, simply don’t get it and clearly are part of the problem?

Sadly, Joe Brothers, your comment still rings true today, more than a year after you uttered it and summarily got replaced on the Kentucky Board of Education for your candor. You see, that is what we do to people in Kentucky who really try to make effective changes in our schools.

The new report on Kentucky’s low-performing school districts has only been out a few hours, but the superintendent of Fayette County is already crying alligator tears about being called to task for low student test scores.

It’s sad when the superintendent of Kentucky’s second largest school district doesn’t get it. The name of the act is *NO* Child Left Behind. And, kids ARE being left behind in Fayette County. 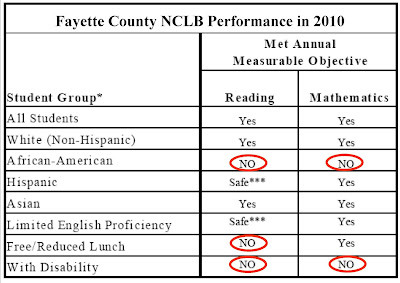 Hispanics and students with limited English proficiency also would have failed for reading, as well, except for one of those infamous NCLB loopholes.

The facts are that Fayette County’s overall average proficiency rate only looks good because whites left the rest far behind. Don’t blacks and other special groups of kids count in Fayette County schools?

Furthermore, don’t forget that those proficiency rates used for NCLB in Kentucky still are based on inflated scores from left-over tests from our now defunct CATS program.

If this state ever gets accountability tests tied to real standards, like those used in the ACT or the National Assessment of Educational Progress, those fantasy proficiency rates are going to crumble.

Bottom line: Fayette County failed against very low standards. Instead of owning up to it and starting to fix things, the district’s head educator is wasting time fussing.

Thirteen districts tagged for low performance and targeted for intervention, as well

As usual, a large proportion of the new Persistently Low-Achieving Schools are in Jefferson County.

But, the real shock to me was finding the Campbell County Public School District in the listing of the school districts that are targeted for assistance. This is in an up-scale area of the state, and the listing of this district shows that nay-sayers who think bad schools are only found elsewhere are seriously wrong.

Here are the districts and some of their vital statistics: 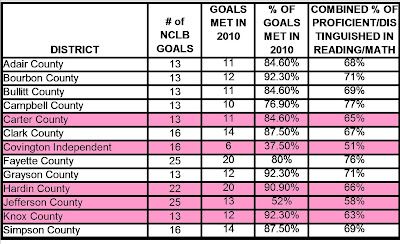 Districts shaded in pink perform the lowest in the group and will get:

• District-level leadership assessments and targeted assistance from the Kentucky Department of Education (KDE), and

• Will work in partnership with Educational Recovery Directors and other KDE staff to develop and implement corrective action plans.”

In addition, these five districts must take other actions required by all 13 listed school systems. They are:

• Defer programmatic funds and develop a budget for deferred funds that will be used to implement activities in the corrective action plan, to be approved by KDE, and

• Set aside 10 percent of the district’s Title I Part A allocation for high-quality professional development to help teachers close achievement gaps.

This is all very nice, but will it work? Do our educators know how to turn these school districts around given all the red tape and restrictions of state regulations and union contracts?

More importantly, if the schools in the district don’t lose their School Based Decision Making Council (SBDM) authority, tinkering with the districts is largely a waste of time. The SBDM, not the districts, currently have the important say about what goes on in the classroom. Trying to fix school districts without taking over SBDM control is like building dams high up in the Rocky Mountains to try and control flooding on the Lower Mississippi River.

More about the schools later.

Kentucky education getting left farther behind on really innovative schools

The Center for Education Reform just released the news that nationwide the number of charter public schools grew by nine percent in 2010.

Thirty-nine states and the District of Columbia has them, and they now have more of these public schools which, in places like Boston, New Orleans and New York City, are beginning to show dramatic performance with disadvantaged children.

Meanwhile, Kentucky has not one of these innovative schools. Instead, our disadvantaged kids continue to suffer in schools stifled by regulations and union contracts that interfere with doing the innovative things our kids need to succeed.