A year-long open records project by the Bluegrass Institute reveals a woeful deficiency when it comes to assessing academic performance as part of local school boards’ evaluations of superintendents. This is especially true in failing Kentucky school districts.

“Social Scientist Sees Bias Within” from the NY Times.

At a recent meeting of 1,000 social scientists who study issues of bias, only three admitted to being conservatives. Doctors, heal thyselves.

Legislators on both sides of the aisle, Dems as well as Republicans, in Indiana get it – charter schools work, and their state deserves more of them.

And, those legislators have the …… (choose your own term) to stand up to a mob-like group of teachers who don’t get it.

“Their priority is their organization, not the young people of Indiana. Their special interest domination of education policy from the local level to the Statehouse has hurt Indiana children for too long and this year, change must finally come.”

Read all about senior leaders in Indiana with courage and conviction to do the right thing for students here.

I sure hope this will finally inspire some of our legislators to do the right thing for kids instead of cowering before noisy educators who selfishly stand in the way of educational progress.

The Bluegrass Institute is watching — and exposing — what’s happening with YOUR tax dollars in Frankfort and defending your freedom in the face of ever-encroaching government policies.

I will be evaluating the 2011 session of the Kentucky General Assembly tonight at 7 p.m. (eastern) on Kentucky GrassRoots Radio. Listen in at BlogTalkRadio.com.

BTW, find the contact info for all legislators on FreedomKentucky.org, the institute’s government transparency Web site.

All that educational progress: Part 2?

I’ve been assembling more comparison maps with the powerful NAEP Data Explorer tool from the National Assessment of Educational Progress.

Here is one I put together to show how Kentucky’s white students’ latest available NAEP writing performance compares to white students in other states that participated (five states shown in blue plus Washington, DC, didn’t participate in this voluntary assessment). I look at whites because they comprise 85 percent of the student population in Kentucky and because with demographics in other states now very different from Kentucky’s, simplistic comparisons of overall NAEP scores are misleading. 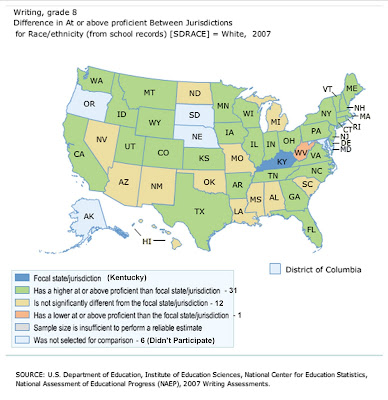 According to the NAEP Data Explorer, after all the time we spent on writing in Kentucky, as of 2007, white students in the 31 states shown in green, including a number in the South, were doing a better job than our white students. NAEP says with a 95 percent level of confidence that all states shown in green got writing scores that were statistically significantly higher than Kentucky’s on this sampled assessment.

Twelve states tied us, including Mississippi.

Only West Virginia did worse.

Now, how is that again about all the progress?