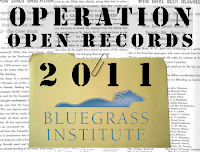 Check here for the latest updates!

After sending a follow up request to Jefferson County Public Schools, the district responded to the request for their most recent fiscal year check register.  The information is currently being entered in a sortable database and will be available soon!

Recently, a set of requests was sent to Governor Steve Beshear and to the Cabinet for Health and Family services to obtain information that will aid in understanding the administration’s stance on the Medicaid shortfall in Kentucky.  You can view those requests here.

It’s ludicrous for House Boss Rocky Adkins to accuse senators of standing in the way of resolving the Medicaid budget crisis in Frankfort. It is, in fact, the House leadership and their go-along pal in the governor’s office, who are holding up progress.

By saying from the outset that they refused to accept any cuts in spending to make up for the $167 million Medicaid budget gap, who exactly was it saying “it’s my way or the highway?”

Adkins lashed out at Senate leaders, saying their demands for responsible budgeting “makes a mockery of the system.”

Since when are Senate leaders, by demanding that a governor who failed to produce the savings he promised already now decide on cuts, making a mockery of the system?

Since when does $38.5 million cuts for education make “a mockery of the system” when local school districts have had a windfall of stimulus funding and now have more than $700 million in local contingency funds.

Since when does a request for a 2.26 percent worth of across-the-board cuts make “a mockery of the system” when most Kentucky families have had to tighten their belts a lot more?

Before they even saw the Senate’s responsible proposal, Adkins and the rest of the good-ole-boys known as House leaders rejected it outright.

Now, who exactly is it that we should give Adkins’ advice to: “When you don’t get your way, you don’t pick up your ball and go home?”

An editor at the Courier-Journal misleadingly changed the title of an Indianapolis Star article while taking it upon him or herself to edit a news report on charter schools in Indiana. 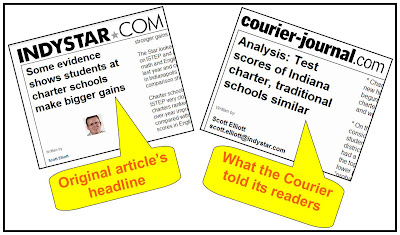 Anyone who reads the Star’s complete original article will realize that, collectively, the comments there much better support the Star’s own headline over the more negative headline the Courier fabricated. Charters in Indiana are starting to show some notable gains over traditional public schools even if the Courier doesn’t want to admit that.

Actually, even the material that survives in Courier’s edited article provides ample information to raise doubts about the Louisville newspaper’s choice of title. This is why I called the Star to find out what was really going on.

I couldn’t believe a competent editor would get a headline so wrong.

Mr. or Ms. Courier editor, please take your uninformed biases against charter schools to the opinion page, or out of your paper altogether. Whatever you decide, get those biases out of your news reporting section. Kentucky deserves more accurate news coverage than this, especially when the news team on the scene has already come up with a more accurate title.

By the way, the Prichard Committee didn’t read the Courier’s article very carefully, either.

Unless one of our readers tells them, I’ll bet Prichard won’t ever take the time to find out that the real headline for this article and what is actually in the full article tell a rather different story from the biased fallacies about charter schools that the Courier pushes.

Here is the source link for the original Indy Star article (which actually didn’t get posted to their own newspaper’s web site until sometime after it got sent out on the Gannett Newspapers’ wire).

And, this is the link to the Courier’s article.

Select the “print” option in each of these web posts to access the headline versions I show above.

After you read these articles, tell us what you think about the Courier changing the news.

The Oklahoma Council of Public Affairs, which used the data to rank states, reported that Kentucky ranked No. 15 in the nation for the largest increase in workers’ comp benefits during that time.

Yesterday, the Tennessee Legislature sent the ‘Health Freedom Act‘ to the desk of Gov. Bill Haslam. Sponsors of the act said it will gives residents a choice to keep the insurance they have without facing the penalties of ObamaCare that go into effect in 2014.

Two liberty-minded organizations, the Tennessee Center for Policy Research (TCPR) and the American Legislative Exchange Council (ALEC), played integral roles in the crafting of the bill.

TCPR president Justin Owen remarked, “This new law will provide Tennesseans with additional recourse against what two federal judges have already ruled to be an unconstitutional mandate.”

While Tennessee lawmakers are working to guarantee freedom of health care choice to for its citizens, Kentuckians remain unprotected from the impending threat of the ObamaCare’s mandates.

The Courier-Journal reports that the Jefferson County Public School District may not be meeting federal and state requirements for turning around its Persistently Low-Achieving Schools, which are among the state’s very worst performing schools.

As a consequence, Kentucky Commissioner of Education Terry Holliday indicates he may withhold millions of federal school turn-around dollars for Jefferson County and might even push the district completely aside to manage the overhaul process himself.

“Jefferson County Schools Superintendent Sheldon Berman said he believes the district is doing exactly what it’s supposed to do.”

That comment makes me think Commissioner Holliday has yet to break through a deeply ingrown denial syndrome that seems to infect this school district.

Certainly, despite Berman’s comments, the district has been most unimaginative about the turn-around process. Over the past year Jefferson County has consistently selected only one of four turn around options available for its persistent low-achievers. That one option requires the district to replace 50 percent of the staff and the principal. The district wouldn’t even try another option, probably because that option intelligently ties teacher evaluations to student performance. It’s an intelligent approach, but the union, which has a lock on Jefferson County schools, hates it.

In any event, part of the reason the Kentucky Commissioner of Education is upset is because the massive teacher shuffling wound up including only a few math and reading teachers. The commissioner says you can’t turn these schools around if you ignore the people teaching the two subjects that got the schools identified as poor performers in the first place.

Per the Courier, Jefferson County Board of Education members Carol Haddad and Debbie Westlund apparently agree with Holliday. Haddad is not happy about teacher shuffling that just moves problems around.

There is another issue hanging out there that the Courier failed to fully cover. The article mentions a recently approved Kentucky Office of Education Accountability (OEA) report on collective bargaining agreements in local school districts in Kentucky.

However, the Courier fails to mention that the report says the school district and the Jefferson County Teachers Association improperly negotiated a Memorandum of Agreement to the union contract which allowed the union to have considerable control over the restaffing process. Per the OEA, that directly violated a provision in House Bill 176 from the 2010 Regular Legislative Session which stipulated that union contracts would not have influence on restaffing decisions (See that for yourself under the “Teacher Distribution” comments on page 40 of the OEA report).

The report also says on page 37 that some of the restaffed schools in Jefferson County wound up with high numbers of zero experience teachers, which is clearly not the intent of HB-176.

JCTA president Brent McKim carefully sidestepped this legal issue, which I know Commissioner Holliday is aware of even if the Courier ducked it.

So, stay tuned on this one.

Well, Dr. Berman probably has access to “formative assessment” results that have not been released to the public, but a few days ago I posted the table of score results shown below for the first group of 10 Kentucky schools to be identified as Persistently Low-Achieving Schools. The table shows the changes in scores on tests from the ACT, Incorporated, that are now given to all eighth and tenth grade students in the state.

As you can see, most of the first group of six schools from Jefferson County saw DECLINES between last year and the fall testing with the EXPLORE and PLAN this year.

This testing was conducted early in the school year, but this most recent publicly available data shows that as of the testing time for EXPLORE and PLAN, “phenomenal gains” had yet to appear. 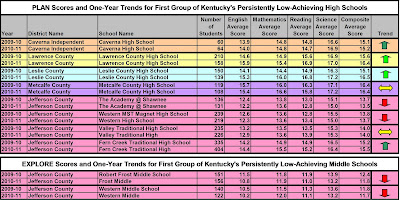 That is not to say there couldn’t have been improvement since the EXPLORE and PLAN were administered, it just makes it a little less likely.

We shall see, but I suspect Commissioner Holliday has access to at least some of the same score data that Berman is looking at, and it certainly doesn’t sound like the commissioner is happy.

One more point: Berman knows he will be gone before more test data gets released. He won’t have to live with the consequences of comments and decisions he makes now. But, the Jefferson County Board of Education will still be around. They would be wise to keep in mind that Berman is making promises that they may not be able to keep.