Meth bill: Don’t lawmakers have more important things to do?

Not only is it unnecessary government intrusion, it would drive up health care costs, take away yet more of our individual liberties and would actually make it more difficult to track the purchases of these products for illegal meth.

MethCheck, the current tracking system in place gives law enforcement officials real-time information about who is making these illegal purchases — allowing them more success in finding meth labs — and currently prevents 10,000 grams of purchases of these products for illegal purposes per month in Kentucky.

Click here for the latest radio ad exposing the fallacy of this proposed legislation.

Governor optimistic about the state of the Commonwealth

Tuesday evening, Gov. Steve Beshear addressed a joint session of the General Assembly in his State of the Commonwealth address.

The governor remained optimistic about the future of Kentucky. While acknowledging the difficult times the Bluegrass State has endured during the last few years, Beshear said the economy is improving and cited examples from his administration.

He distanced himself from Democrats in Washington, touting his commitment to cut spending while fairly assessing: “Kentuckians are rightly disgusted by a federal government that defines fiscal management as the speed at which you can print money.”

The governor took a strong stand for Kentucky’s coal economy, vowing to protect the industry from federal regulations and overreach.

The address was not without party politicking, as Republican gubernatorial candidate and current senate president, David Williams, looked on.

The governor noted that he supported Williams in Senate Bill 8, an electronic portal to help reduce complexity for Kentucky businesses. However, Williams did not conceal his feelings about the Beshear administration: “The man has no agenda.”

He said the governor is not adequately addressing pressing fiscal issues in the commonwealth, referring to Medicaid costs, the pension crisis, and the tax code. 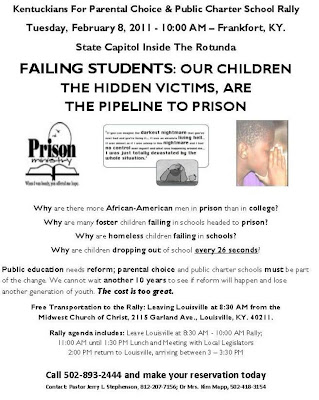 This story started with an Op-Ed titled “Time to Raise Expectations for Education,” from Bob King, the President of the Kentucky Council on Postsecondary Education (CPE).

This article was mainly meant to introduce parents and general Kentucky citizens to the CPE’s “High School Feedback Reports,” which are loaded with interesting information about what happens to graduates of Kentucky high schools once they enter college.

King also talks about how the current school curriculum isn’t aligned to college and workplace needs and that we need to refocus. He also takes a shot at adults in the system who tend to protect themselves first before looking to the needs of their students.

Overall, it was a good message, but it was bound to raise the ire of those who have pushed the status quo, who don’t like to admit to problems with our current assessment system, and who therefore don’t like the message contained in the feedback reports and other indicators like ACT test results.

Ire was indeed raised, and a reaction to King’s article was penned by Skip Kifer, a retired professor from UK’s school of education. As a note, Kifer played a major role in designing Kentucky’s first reform assessment, which was widely known as KIRIS. He also testified in favor of keeping a CATS-like assessment when this program’s future was being debated, and finally, mercifully ended, in 2009.

Kifer takes strong issue with King, saying King implies that the ACT test is used as the sole determinant of whether or not students needed to take remedial courses in college.

In fact, ACT scores are just the first step in the process of determining whether students will have to take a remedial course in Kentucky’s colleges. Step two happens when kids arrive on the campus. They take more placement tests to confirm if the ACT scores provide a valid picture of their true preparation. Colleges also consider a students GPA’s, according to a CPE spokesperson, before making that final placement decision.

Of course, GPA inflation is an on-going problem in Kentucky, fueled in part by pressure from the KEES Scholarship program, which can reward more money for higher GPAs. Sometimes, despite Kifer’s assertions, GPAs no longer always provide trustworthy information, either. That’s why Kentucky colleges also use the ACT to more accurately determine placement.

Anyway, Kifer’s obvious adverse reaction to the ACT test isn’t really a surprise. Kifer has gone on public record about his problems with multiple choice tests.

In his rebuttal, Kifer even attempts to undermine the ACT by citing results from a rather old UK study. This was performed years ago on ACT scores from the Class of 1993. Kifer would have us believe the ACT of today is no different from those assessments given nearly two decades ago. I suspect the ACT actually enjoyed the benefit of a lot of subsequent research during that long period of time.

Another fact seems pertinent. Two testing systems loaded with open-response heavy question formats that Kifer prefers have failed miserably in Kentucky. Those systems didn’t get our schools focused on what kids really needed. Our colleges say so, and so do industrial leaders.

And, if Kifer had just called the CPE first, he could have learned about what really happens in the college placement process.

Tuesday thoughts and links: State of the Commonwealth, Fayette schools, and more…

Here is a Vimeo from Principal Dewey Hensley with some of his own thoughts about what is happening in this very unique school in Louisville.

Hear how Hensley worked to overcome a “culture of can’t” in this school where virtually every student is in the federal free and reduced cost lunch program and where the black/white ratio is almost equal.

Dewey Hensley- Principal of Atkinson Elementary from CTL on Vimeo.