JCPS bus driver assaulted: BUT, WHY?

The Courier-Journal ran an article on March 2, 2011 about two women – or as it later turned out, a woman and a 12-year old child – who dragged a school bus driver off of her bus on March 1, 2011 and then beat her. That assault left 19 other students on the bus – without any adult on board – with the engine running.

Clearly – if the Courier has it right – the behavior of these unidentified women is outrageous.

But, don’t be too quick to judge only these two women.

The Courier also says that JCPS transportation director Rick Caple admits this bus route had disciplinary problems and that some parents were upset with the driver last week over bullying on the bus.

That raises some questions:

• Did the bullying continue after parents complained?

• Did the assailants file the complaint, or were they aware of a complaint already filed?

The fight broke out as the 12-year old tried to get on the bus to find a younger brother. WHAS’ report indicates there is a dispute about what happened after that.

The school district says everything was caught on a school bus security camera. Since that tape could be crucial to either the prosecution or the defense of the mother involved, it remains to be seen if this video is released or subpoenaed.

The Courier’s first article does provide enough information to tell that this bus route runs from Stopher Elementary School, way out on the East side of the school district, outside of the I-265 loop, to the downtown intersection of West Broadway and South 24th Street, where the assault allegedly occurred. Mapquest plots a route between those points that is 21 miles long, which would make this bus route one of the longer runs in the district’s crazy busing plan.

So far unreported: what was actually happening to the young son of the woman involved? Was he being bullied? Did it stop after parents complained? Was the mother one of those who complained?

So, maybe some other folks need to be in the dock when the 12-year old and her mom face the consequences of their actions.

• Those in the school system who hear complaints about bullying and do nothing (which also violates existing law and definitely is a problem that was extensively discussed last week in the House Education Committee meeting).

• Those in the school system who think a single bus driver can safely navigate inner city Louisville streets all the while riding herd – completely alone – on a bunch of youngsters who are being bored to tears by excessively long bus rides.

By the way, some of the buses in Louisville seat a lot of kids, maybe 50 kids plus. No teacher in this state is willing to take on a group of kids that large, alone. Why would we expect bus drivers to do this?

Louisville’s out of control busing plan is so large that there probably is no way the school system can afford to put an extra adult on each bus as a monitor. But, without extra adult supervision, chaos on the buses, especially given the long rides being forced on these students, is inevitable – and it’s happening.

So, the “rest of the story” here may be that the whimsy of forced busing for diversity has run into the reality of human nature of children and the fact that the busing for diversity plan simply cannot afford to provide adequate supervision of children trapped in such situations. That does not excuse the attacks that occurred, but it does raise the issue of whether those attacks were provoked when others didn’t do their jobs.

Lawyer Chanin makes it clear: union rights such as:

• “Due process” (meaning, continuing the excessively burdensome procedures that have to be followed before a teacher can be removed for poor performance),

• employee rights (what about student rights???) and, of course

Closing achievement gaps, improving our deplorable graduation rates and improving teacher quality are not as important to the NEA.

Chanin honestly admits it’s all about power. And, he isn’t talking about parent and student power.

Clearly, the union is not the best source of advice if what we really want is a better education system for children.

Get out of Education Commissioner Holliday’s way

1) Most are amateurs on turnarounds and creating education performance excellence.
2) They can’t implement their theories or be held accountable for results.

There is an alternative to amateur hour. The meddlers left a magic wand in the KRS 160.346 transfer of authority. Persistently low-achieving schools can have School-Based Decision-Making councils’ powers, duties and authority transferred to the superintendent or commissioner!

Put the star in the game. Commissioner Holliday is a proven pro with proven results. Put all the meddlers’ experience together and you won’t match his bio.

His Iredell-Statesville (North Carolina) schools won the Malcolm Baldrige National Quality Award for Education Excellence in 2008. Look at the winning application. Pay particular attention to the criteria depth of thinking, the integration of approaches and the metrics. Haven’t seen that level of thinking coming from the governor, legislators, teachers union, consultants or the site-based decision councils, have you? Why? They don’t know how.

Kentucky governors, legislators, teachers unions and consultants have had their 20-plus years of glorious theory and spinning unacceptable results.

Now it’s time to give Commissioner Holliday the magic wand. Forget about getting along. Getting along will keep Kentucky kids continually looking up at others learning more and snatching their opportunities.

This is an interesting find… 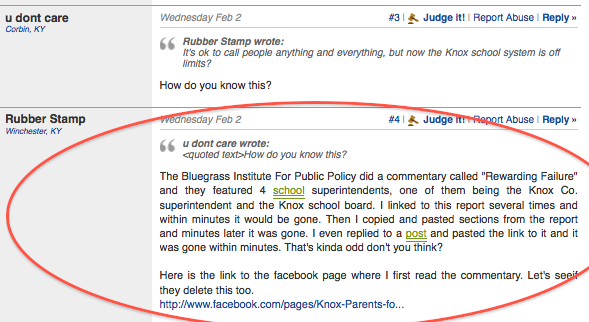 This thread was found on Topix.com here.

An interesting post for sure…wonder if this is true…

How many high school dropout factories did he say?

During the March 1, 2011 meeting of the Kentucky House’s Education Committee, committee chair Rep. Carl Rollins asked Kentucky Commissioner of Education Terry Holliday how many high school “dropout factories” did we have in Kentucky.

Dr. Holliday’s stunning answer was – about 50!

The state only has around 230 Class A1 high schools total, which are the only high schools that report graduation rates. If Holliday is right, over one in five Kentucky high schools would be a “dropout factory.”

By the way, the term “dropout factory” was coined by a research team at Johns Hopkins University to identify high schools where the graduation rate is lower than 60 percent based on a formula also developed by Johns Hopkins.

More recently, the US Secretary of Education Arne Duncan has used that term, indicating across the nation that there are 5,000 dropout factory high schools. Commissioner Holliday informs me his “50” estimate is based on the assumption that Kentucky will have about one percent of that nationwide total of 5,000 high schools.

It isn’t clear if the US Secretary of Education is using the Johns Hopkins definition and data for his 5,000 dropout factory figure or another approach, perhaps based on the Averaged Freshman Graduation Rate (AFGR) formula that Kentucky will start using to report graduation rates this summer.

I did some quick AFGR calculations for the 2008-09 school year using the appropriate years’ information on fall membership and on-time graduations from the Kentucky Department of Education. In 2008-09 my spreadsheet shows Kentucky had about 15 high schools with gruesomely low graduation rates below 60 percent (three schools were missing some data for a 2009 calculation and were not included, but at least one of those schools had very poor performance in the past).

Of course, even a 70 percent graduation rate is way too low in my book. We do indeed have about 50 high schools as of 2008-09 with AFGRs below 70 percent. Again, that is more than one out of five of our Class A1 high schools in Kentucky.

Dr. Holliday indicates the Kentucky Department of Education is computing AFGR figures now for several back years so we will be better prepared when this becomes the official formula for graduation rate calculations. I’ll post on those “official” department AFGRs as soon as the data is available.

One thing is very certain – a lot of Kentucky high schools, and the students and parents they serve, are about to face a very rude shock.

In his op-ed in today’s Lexington Herald-Leader, Jim Waters, vice president of policy and communications, discussed the latest attempt by some politicians and pencil pushers at law enforcement agencies to make pseudoephedrine a controlled substance.

An attempt to exempt “gel” or “liquid-gel” caps from requiring a prescription is being called a compromise. But Waters writes it’s no such thing: “It remains what it’s always been: an attack on Kentuckians’ individual liberty. … This new tactic by logically challenged politicians reveals the same intellectual denseness demonstrated all along in this fight. They believe keeping law-abiding citizens from purchasing Sudafed would somehow keep pseudoephedrine out of the hands of criminals who make the destructive drug methamphetamine.

He also points out: “Kentuckians concerned about their liberties should be suspicious that suddenly, these same folks — unwilling to compromise with proposals that would still allow citizens to buy whatever legal cold, allergy and sinus medicines they want while containing the meth problem — now say they could live with this proposal.”