No surprise here: According to The Kentucky Gazette, teachers unions topped the list of the 155 political action committees that spent $2.8 million in 2010 to elect Kentucky politicians “friendly to their cause.”

Editor Laura Cullen Glasscock combed through Kentucky Registry of Election Finance records and found that the Kentucky Educators Political Action Committee (KEPAC) — the statewide teachers union — spent more than $435,000 last year while the Better Schools Kentucky, a PAC of the Jefferson County Teachers Association “began the year with roughly $10,600 in its coffers, but raised more than a half million dollars. It spent more than $419,000 and ended the year with almost $130,000.”

Glasscock also reported that: “direct contributions to candidates tallied $134,400 for KEPAC and $27,000 for Better Schools.”

Is it any wonder that politicians “friendly” to the unions’ cause are stubbornly refusing to allow reform measures that give parents a choice, hold teachers and administrators accountable, cut wasteful spending and demand measurable results from the bureaucracy?

The second part of the 2011 session of the Kentucky General Assembly convenes tomorrow in Frankfort with the day being highlighted by Gov. Steve Beshear’s State of the Commonwealth speech at 7 p.m. EST before a joint session of the House and Senate. KET will carry the speech live.

The last day for new Senate and House bills will be Feb. 11 and 14, respectively. The final two scheduled days of the Legislature will be March 21 and 22, during which time veto overrides will be considered.

Enhancing effectiveness is great.  That sort of language makes people feel good.  However, I hope there were some numbers associated with these goals somewhere because the following set of numbers is quite alarming. 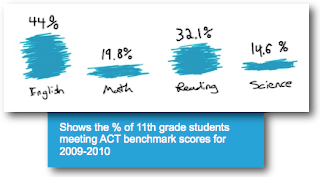 This graph shows the proficiency rate of 11th grade students in JCPS for 2009-2010.  In simple terms, these numbers are not good enough.
From the evaluation:

“Dr. Berman is a knowledgeable educator who is committed to moving the district to higher levels.  To meet this goal, the Board encourages Dr. Berman to work towards developing a relationship of mutual respect with district staff.  The Board believes that by improving his relationship with staff, Dr. Berman will become an even more effective leader that staff will gladly follow”

Here is how I think the room for improvement section of this review should read:

“JCPS is a district that has not met the watered-down, basic requirements of No Child Left Behind for 7 consecutive years and has 47 schools that have not made adequate yearly progress in the last school year.  To remedy this serious deficiency immediately, the Board demands that Dr. Berman establish bold, quantifiable goals to ensure that all schools in the district will meet these basic requirements in the next school year.  The Board realizes that JCPS is about kids and not adults.  As a knowledgeable educator, it is Dr. Berman’s responsibility to take this problem head-on and get results.”

I read an article today about using MRIs to discern whether smokers are able to quit smoking.  Whether they are able to depends on certain activity in the area of the brain responsible for behavior change.

Much more than an elementary school

It’s a traditional public school, more or less, that runs like it’s a charter school. And, much more.

Truly, it is an academy.

I had a chance to visit the J.B. Atkinson Academy in Louisville about ten days ago, and I can happily attest that this up and coming educational center in inner city Louisville is much more than an elementary school.

For example, several of the building’s classrooms are dedicated to the University of Louisville’s school of education. Student teachers from U of L take their classes in Atkinson, not on campus. This way, future teachers can learn a methodology one day, observe a working professional using the method in a real classroom the next day, and then practice it themselves with real students a day or so later.

U of L professors also hang out after class at Atkinson, doing research in a real school setting while meeting collegially with the regular teachers in the school. The chance for enrichment in both directions is paying benefits in Atkinson’s performance and the improved ability of U of L to provide a new, better prepared group of teachers in the future.

Atkinson’s guiding educational philosophy is ahead of the pack. Under Principal Dewey Hensley, the school started to focus its young students on college and careers long before Senate Bill 1 finally defined that as the proper statewide goal for all our schools.

This mural over the entrance to Atkinson’s gym makes it clear where Atkinson’s staff intends their kids to go: first to middle school, then to high school and – finally – College!

After kids walk under this mural to enter the morning motivation meeting with Hensley and his staff, the students get quizzed on what year their grade will enter college. Every year group, from kindergarten to the fifth grade, knows their answer.

Hensley runs those morning startup meetings like a sales manager psyching up his team to go out and really be productive. He talks about how important learning is, lacing the discussion with a vocabulary lesson on terms like “dendrites” and “synapses.” A kindergartener responds, talking about the occipital lobe in the brain, sounding like he really understands the term. Wow!

This school shreds the notion being pushed by some charter school opponents that regular public schools can’t do what charter schools do.

One reason charter schools outperform with disadvantaged kids is that they run a longer school year. Hensley went out and got a grant, got support from his teachers and a progressively thinking union representative, and now he runs a longer year for kids that need it, too. He even runs classes through the summer for the most challenged kids, another charter school activity.

Stay tuned for more on this school. Atkinson is making strides in a number of areas and – perhaps even more importantly – is up front about looking at data and evidence to confront head on those areas where they still need more work.

Atkinson shows that ideas that improve regular public schools are available and can transfer from charter schools. Just as charter schools are proving, Atkinson shows that if a school gets the right leadership, staff, and support, that school can start to make it happen for kids. But, some tough decisions have to be made, and people must be willing to confront their short-comings to make it happen.

More on that later.

Whenever I discuss how Kentucky ranks with other states in federal National Assessment of Educational Progress testing, I always point out that it isn’t appropriate to simplistically compare our scores for all students to scores for all students in other states. The reason is that Kentucky’s classrooms remain about 85 percent white, while most other states now have much higher percentages of minorities in their total enrollment figures. Because minorities score much lower than whites, simplistic comparison of overall scores just provides Kentuckians with a false sense of our real performance.

One way to get around this problem, which even NAEP publications discuss, as I mentioned several days ago, is to break out the NAEP scores by race. With so many whites in Kentucky, it is clearly important to see how our white students do against their peers. I showed you a map of that several days ago here.

However, whenever I show people such maps, they always respond that our whites are poor and want to see a comparison of scores for poor whites only. OK, here that comparison for proficiency rates in the various states for NAEP Grade 8 Science from 2009: 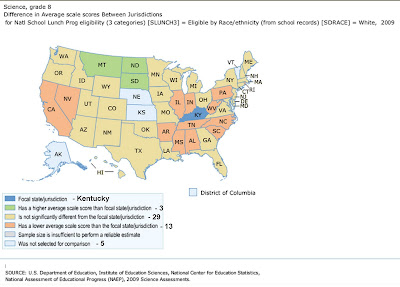 So, given the statistical limitations of this sampled test, what do we know?

Kentucky’s poor whites were only outscored (with a high level of certainty) by three states on NAEP Grade 8 Science. That’s the good news.

Kentucky did outscore 13 other states.

The rest tied us, as close as we can tell with any level of statistical confidence.

So, what does that say about how Kentucky’s poor whites (those who qualify for federal free and reduced cost lunch) rank for grade 8 science as of 2009?

We placed somewhere between fourth and 33rd in the nation. That’s all we can confidently conclude. Anyone who tries to make more precise claims is simply violating the statistical limitations of this sampled testing program.