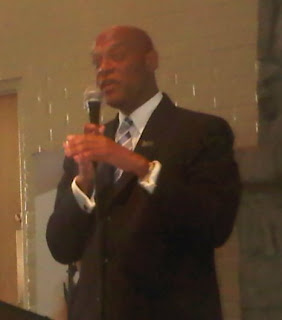 On May 13, Kevin Chavous, the new chairman of the Black Alliance for Educational Options, spoke at a dinner officially announcing BAEO’s presence in Kentucky. Pastor Jerry L. Stephenson, an inner-city Louisville minister, has been named the first state coordinator of BAEO, which now has chapters in eight different states.

Chavous, a former Washington, D.C. city councilman, joined Joel Adams, the new state coordinator for the National Alliance for Public Charter Schools, to pledge their support in working with the Kentucky Education Restoration Alliance coalition to convince lawmakers to bring charter schools to the commonwealth.

“What we are saying is, it’s time for Kentucky to step up,” Chavous said at the event. “There is a movement in America to change education. You can either get on the train or you can get left at the station. We need you to commit for these kids.”

Louisville Metro Councilwoman Cheri Bryant Hamilton hosted the event at the Shawnee Golf Club House in west Louisville. Hamilton has attended two out-of-state BAEO events during the past few months and plans on reaching out to her fellow council members to get support for charter schools from Kentucky’s largest local government.

Jim Waters, the Bluegrass Institute’s vice president of policy and communications, represented the institute at the event. The institute was praised by Stephenson and others for its work in providing the intellectual ammunition concerning Kentucky’s school performance and for its call for system-wide reform.

Waters also spoke at a charter school boot camp, conducted earlier in the week at The Yearling Club in West Louisville. Representatives from BAEO and the National Alliance for Public Charter Schools conducted three hours of training on how to effectively reach out to legislators, the media and fellow citizens concerning charter schools.

Among those attending the event was Hal Heiner, Louisville Metro’s Republican mayoral candidate who lost a close race in November. Heiner is working with the coalition to reach out and engage the business community in education reform.

A wealth of information about charter schools — what they are, how they operate and who they serve — is available at www.freedomkentucky.org. Notice the facts included in a recent Bluegrass Beacon column I wrote on charter schools.

There are many gaps contributing to the poor performance of the Jefferson County Public Schools, including the well-publicized academic achievement gap between whites and minorities and the common-sense gaps which are unmistakable in the district’s busing and student-assignment policies.

However, the most serious gap might be “the experience gap.”
I write about it in today’s Louisville Business First.

Supporters of state involvement in the Ark Encounter project in Northern Kentucky claim no tax dollars will be used in its construction or operation. Yet plans call for an $11 million improvement to an Interstate 75 interchange to accommodate an expected increase in traffic caused by park visitors. In his latest column, Jim Waters asks: ”If it’s not taxpayers providing the ‘assistance’ that the governor indicated the park will receive, how will that transportation project get funded?”

Lots of kids get left behind after graduation in Jefferson County

WAVE-3 TV reports that thousands of Jefferson County students are graduated from high school in 2010 and headed on to other life pursuits such as higher education or the workforce.

What WAVE-3 missed is the fact that new data from the Kentucky Department of Education shows that a chunk of last year’s Jefferson County graduates reported they didn’t head anywhere after high school – not to college, not to the military, not to tech school, not to the workforce.

And, we don’t know for sure what happened to additional thousands of Jefferson County students who simply dropped out before getting a high school diploma, but it’s a good bet most of them are in even more dire straights.

By the way, a KDE spreadsheet with the dropout statistics for 2010 says there were only 1,386 dropouts from the district’s Class of 2010.

But, we know from another KDE report that this class entered the ninth grade in Jefferson County in the 2006-07 school term with 8,589 students. Now, the KDE Excel spreadsheet with the Transition to Adult Life statistics shows a total of only 5,956 regular high school diplomas and certificates of attendance (for students with severe learning disabilities) were awarded in 2010 (Sorry, I don’t have a further breakdown because KDE broke precedent and is withholding detailed graduation data).

So, what happened to all of the 2,633 students who didn’t cross the graduation platform with their former classmates if only 1,386 of them are supposed to be dropouts? What happened to the other 1,247 students who just disappeared? Did body snatchers from Mars sneak into town???

The new Transition to Adult Life spreadsheet also shows the percentage of Jefferson County students that made successful transitions to adult pursuits by year, which is obviously dropping. 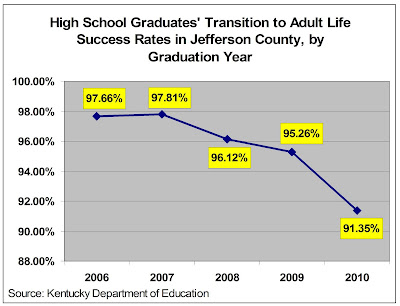 That is similar to the statewide decline in graduates’ success that I wrote about earlier.

So, more than 500 of the Jefferson County high school graduates in 2010 didn’t go anywhere after high school.

That is really sad.

It also adds to concerns that, just maybe, there could be a little social promotion going on in our schools.

Now, here’s something to think about. Out of the 8,589 students who started the ninth grade as part of Jefferson County’s high school class of 2010, only 5,956 crossed the graduation dais. And, about 500 of those graduates were not successful. Since we know high school dropouts are in trouble in the new economy, that leaves only around 5,456 success stories out of a starting group of 8,589 ninth graders – a real transition to adult life success rate of 64 percent. That’s all!

It’s not just the economy

Along with other non-academic data, the Kentucky Department of Education released new statistics yesterday on how the state’s high school class of 2010 did in entering follow-on pursuits such as getting a job or going on to college and the military.

I assembled the new data with older years of data from previous reports to generate the first graph. 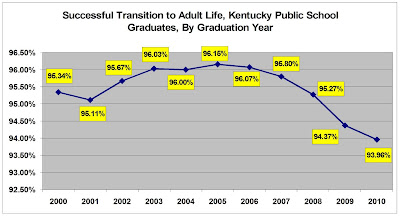 Clearly, there has been a falloff recently in the success rates of Kentucky’s high school graduates (note: this data tells us nothing about what happened to students who dropped out of high school before graduation – a story undoubtedly much worse).

This falloff in graduate success is troubling.

Credible federal statistics on Kentucky’s high school graduation rates, which I have discussed before, are shown in the next graph. The federal figures, computed from the carefully researched Average Freshman Graduation Rate formula, are available through 2008. 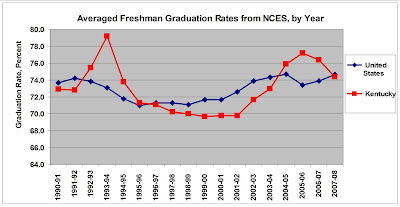 I had hoped to see more up to date calculations of those rates extended to 2010 when the new non-academic report came out yesterday from our department of education, but as I discussed earlier, that didn’t happen.

Still, we can compare the data through 2008, and I see notable problems.

Not only did our high school graduation rate start declining after 2006, but it is clear those who did graduate started to experience less success in follow-on life pursuits, as well. And, the drop in that success rate started after 2005, well before the economic downturn.

While this data isn’t conclusive, it does raise disturbing possibilities.

• Is the quality of Kentucky’s high school graduates starting to fall?

• Could there be social promotion all the way to a diploma going on?

I’d like to know the answers to those questions. Wouldn’t you?

That is another reason why I am not happy that the Kentucky Department of Education decided to sit on the new graduation rate data for two more months. By that time, another school season will be under way, and it will be too late for education leaders to make changes if they are needed.

A lot of research says kids tend to lose some of the skills they learn in school during summer breaks.

In one attack on the problem, educators in Boone County are offering summer reading books at low cost that are targeted at the proper age level for students.

Whether a parent chooses the Boone County approach, or using summer programs at a local library – many are free, or doing something on line with their child, a little extra effort to keeping your child reading during the summer can go a long way towards keeping your child up to speed and ready when school starts up again.

Also, spending a little time to read with your child may help you learn if he or she is having reading difficulties that require extra attention. This is especially critical during the first three years of school, because after the third grade, students are no longer being taught to read. Instead, they are expected to be able to read to learn.