Do schools want more than we can afford?

I mentioned a few days ago that the US Census Bureau just released the latest edition of its Public Education Finances report, this time for the 2008-09 school term. It didn’t take long for a newspaper to use the new data release to start fussing that “Kentucky lags in education funding.”

Too bad the newspaper didn’t check out more information from the Census Bureau’s report, including the interesting information in Table 12. In that table, the Census Bureau relates each state’s education spending to the state’s personal income levels. In other words, Table 12 ranks state education spending against the state’s citizens’ ability to pay.

Here are some highlights: 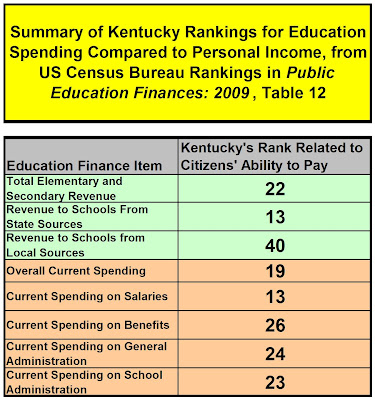 With 50 states plus Washington, DC included in the table, it is clear that once Kentuckians’ ability to pay is considered, we are doing an above average job of funding our schools.

What makes this more remarkable is that Kentucky’s relatively low per capita income means our citizens have fewer disposable dollars available to throw at education in the first place.

Clearly, once the average Kentuckian’s ability to pay for education is considered, it becomes clear that when Kentucky’s educators just whine for more money, they are turning a calloused eye on this state’s citizens’ ability to provide more.

Quote of the day: Memorial Day and courage

“Courage is contagious. When a brave man takes a stand, the spines of others are often stiffened.” –Billy Graham