Jefferson County: Never going to get it???

Once again, Jefferson County Public Schools have opted to use the “Staff Replacement” option to turn around Knight Middle School, the latest school in the district to join the Persistently Low-Achieving Schools list in Kentucky.

This same model is now being used in ALL 13 the Jefferson County Low-Achieving schools. However, application in Jefferson County is being corrupted with a claim that teachers who have been in the school less than three years can be counted as a replaced teacher even though they don’t leave the school.

So far, every Persistently Low-Achieving School outside of Jefferson County has selected another option, the “Transformation Option,” which requires teachers in the school to be evaluated on student performance and other measures. The hyper-aggressive teachers’ union local in Jefferson County wants none of that. The union would rather not have any members identified for poor performance. Gaming the system is a much better ‘solution’ in the eyes of these adults in the Louisville school system.

Meanwhile, limited data from fall testing with the EXPLORE and PLAN assessments in the first group of 10 schools identified as Persistently Low-Achieving indicate that the “Staff Replacement” turn-around option used exclusively in Louisville is not working as well as the “Transformation Option” being used elsewhere.

Also, Jefferson County high schools in the Persistently Low-Achieving List continue to provide dismal evidence of problems in the district, as these new, 2011 graduation rates (which I calculated from the Johns Hopkins Promoting Power Index Formula) gruesomely attest.

(Note: Calculated from School Level Growth Factor Reports from the Kentucky Department of Education which are not available on line)

By the way, Johns Hopkins says a Promoting Power Index below 60% is evidence of a “dropout factory.” Rates below that value are in red.

The red ‘digital ink’ shows two schools, Iroquois and The Academy at Shawnee, qualify as dropout factories across the board for white and black students of both sexes.

Only one school, Fairdale High, escapes the dropout factory label across all four race and sex categories. It didn’t escape by much in the white male category, however.

The Johns Hopkins formula isn’t perfect, but it is the only one available until the Kentucky Department of Education finally gets off the dime and releases better data for the first time in August. Why that better data wasn’t released earlier is a big mystery, despite some department excuses.

Don’t know much about history – STILL

“Those who don’t know history are destined to repeat it.”

The new National Assessment of Educational Progress in History report is out, and it looks like our kids still don’t know much about history. Average scores for grades 4 and 12 are not statistically significantly different in 2010 from what they were in 2006. In fact, the US high school seniors’ score isn’t statistically different from the score a decade ago in 2001. Only the grade 8 kids saw a little improvement. 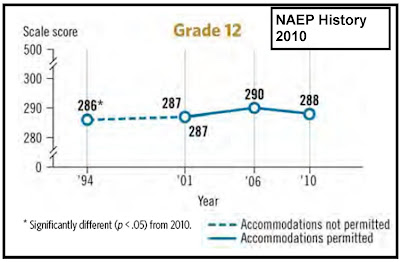 Want to know why voters get so confused.

In fourth grade, only 20 percent of the students performed at or above the Proficient level in history. In eighth grade it was only 17 percent and by high school only 12 percent – little more than one in ten! – met muster!!! This has been going on for years, thanks to inadequate performance of our public schools. Now, generations of Americans lack the historical background needed to really understand many issues and vote intelligently.

Want more specifics about what our kids (and many adults) don’t know? Click the “Read more” link.

Here is a quick list of what our kids don’t know much about:

• Culture – The Gathering and Interactions of Peoples, Cultures, and Ideas

• Technology – Economic and Technological Changes and Their Relationship to Society, Ideas, and the Environment

• World Role – The Changing Role of America in the World

The full report card can be downloaded on line from here.

Okay, help me understand this:

Why do we have a law that automatically adjusts taxes? Perhaps this one should be reviewed, especially since the Road Fund has enough discretionary funds to hand out tax incentive favors to a handful of businesses and large recreated arks.

Yesterday, The Bluegrass Institute’s own Jim Waters was interviewed by WHAS about the superintendent search in Jefferson County. Waters was quoted as saying:

“The system has a lot of issues that need to be addressed.  Superintendents need to have the flexibility to put the most experienced teachers in low performing schools”

Transparency, accountability and cuts are easier to talk than walk

The White House has announced a new initiative to cut government waste and reduce deficit spending starting with the removal of nearly 500 websites managed by the federal government. It is certainly a nice gesture.

Unfortunately, Kentucky never saw that efficiency study. Wouldn’t it be great if Kentucky could set the standard for reducing costs associated with government? Do you think this is possible?

This week starts off on a sour note (cue trombone) with Kentuckians having to sit back and watch other states’ leadership take steps towards education system change while we continue to talk in circles.

In Tennessee, lawmakers have empowered local school boards to guide the decisions of teachers rather than unions. This is an important step in improving an education system for the kids. In New Jersey, Governor Christie is implementing a policy that would allow private companies to manage chronically under-perfoming school districts. We have chroniclly under-performing districts in our own state!
While neither of these new initiatives are magic bullet solutions for school systems, they are a step in the right direction. When will leadership in Kentucky start to take similar steps? Ask your legislator when he/she plans to take a stand and put kids first in education.