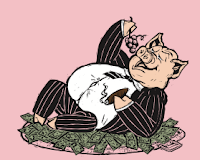 If you are job hunting in the midst of our nation’s financial downturn, consider this: there is an organization that, even when rumored it would experience a shutdown, is still handing out taxpayer money in bonuses!

Care to take a guess at who that might be? Yup, you guessed it.

This is exactly why transparency is so important. It is the first step toward keeping our government accountable.

One week ago we wrote that a request by Governor Steve Beshear to get out of No Child Left Behind accountability was premature.

It looks like at least one knowledgeable state leader agrees with us.

Per CN2, Kentucky Senate President David Williams also finds the governor’s attempt to scuttle NCLB accountability premature. Like us, Williams knows the new state assessment Beshear wants to use is not yet fully developed, and many elements such as the End of Course high school exams and the lower grade exams are not even available at this time. In fact, some elements won’t be ready for prime time (created with trial runs completed) for several more years.

This is not to say that eventually the state’s system won’t work out well; but, until we see a couple of years of data, I’m not ready to disband the only accountability system currently in use to evaluate our schools. After all, Kentucky failed to get a viable assessment program not once, but twice since KERA began. That isn’t a track record to inspire more gambling with our kids as we rush committing to what could be a home run, but might also be the third strike out.

The new 2011 edition of the ALEC-Laffer State Economic Competitiveness Index is now out. But it contains no surprises for Kentuckians.

Tennessee’s absence of a state earned income tax and its status as a right-to-work”>right-to-work state has provided Tennessee with the eighth highest absolute domestic migration in the nation over the past ten years.

Kentucky’s dismal economic outlook is based on 15 equally-weighted factors including highest marginal personal and corporate income tax rate (8.2%), debt service as a share of tax revenue (11.8%), percent of workforce in public sector (5.6%), average workers’ compensation costs (2.29% of total payroll), the imposition of the inheritance tax and forced-union status.

The ALEC-Laffer economic outlook index makes clear where Kentucky needs to make serious changes to improve its long-term economic condition: the top marginal personal income tax rate is the tenth highest in the nation; the miscellaneous tax burden (excluding income, sales, and property taxes) is twelfth highest; the ratio of debt service to tax revenue is third highest; and the quality of Kentucky’s legal system (based on tort litigation treatment, judicial impartiality, etc) is the second worst in the nation.

According to this report card, Kentucky has ample room for serious fiscal improvement.

We wrote yesterday about how the Campbellsville Independent School Board turned in a perfect score evaluation for their superintendent.

Today, we submitted an open records request to obtain a copy of the performance evaluation along with the criteria the board uses for evaluation.  You can monitor the progress of the request here.

The Campbellsville school board thinks so. The Central Kentucky News-Journal reports in “Deaton doing ‘outstanding’ job, Board says” (Subscription) that Campbellsville’s superintendent just ‘maxed’ his annual evaluation, getting a full 4.0 points out of 4.0 points possible.

Supposedly, the evaluation included: “Student Achievement and learning.” Per the board, test scores improved in Campbellsville.

On Kentucky’s inflated – and now disbanded – Kentucky Core Content Tests (KCCT), last year’s Interim Performance Report for the district shows proficiency rates did increase for most subjects and school levels, with the exceptions of high school reading and high school social studies. But, the KCCT don’t measure what kids need for college and careers and will not be used again.

Once the KCCT goes away, Campbellsville may be in for some rude surprises. Some of those surprises – like better quality ACT tests – have already started. Others, like better quality graduation rate reporting, are due soon. I took a look at some better quality “stuff” for the district, and the results raise a question about whether the superintendent really is a 4.0 perfect score player.

The KCCT are now history. Tests that are aligned with college and careers are coming in the next school term. In fact, some of those tests, ones from the ACT, Incorporated are already in use.

The most recent 11th grade ACT test results for Campbellsville show a DROP in the composite score of 0.3 point between 2009 and 2010. And, the district’s 2010 ACT Composite Score of 17.2 is way behind the statewide average 18.5.

One more thing, another change coming soon will be more honest high school graduation rates using the federally developed Averaged Freshman Graduation Rate (AFGR) formula instead of the nonsense formula Kentucky has been misleading us with since No Child Left Behind began.

Unfortunately, the Kentucky Department of Education has delayed (stalled?) the release of the 2010 AFGRs for the state until August. However, another calculation, this one from the Johns Hopkins University, can give us a general idea of what the AFGRs for 2011 will look like. Usually, the Johns Hopkins results are a little lower than the AFGR, but the two are usually fairly close.

The Johns Hopkins formula, called the Promoting Power Index, shows the ratio of fall enrollment of 12th grade students for the graduation year in question to the enrollment count for the same class when it entered the 9th grade. It is often considered a graduation rate formula because not very many additional students drop out of school once they reach the 12th grade, so it is reasonable to assume those present in the fall will survive to get a diploma in the spring.

Oh, yeah, the latest available Transition to Adult Life data shows that among those that did graduate from Campbellsville in 2010, one year ago, only 51.52 percent went on to college. Statewide, the percentage was higher at 56.41 percent.

It will be interesting to see how Campbellsville turns out next year, once better metrics on performance are available. Somehow, I just don’t think the Campbellsville board thought about preparation for college and careers when it produced its 4.0 evaluation recently. That could come back to haunt them next year.

Note: EXPLORE, PLAN and ACT discussions are based on Excel spreadsheets with the respective testing data, available from portal here.

Data from the Interim Performance Report is on line in this portal.

Yogi was right: It’s déjà vu all over again!!!

• What Kentucky was told in the early days of KERA:

“Business is telling us that all students must be able to think and solve problems at the level originally required of a few.”

“Learners initiate, implement, and evaluate their own learning.”

“Student-Directed Learning is characterized by students taking responsibility for setting the direction of their learning and helping determine the types of instruction which are most appropriate for the selected task.”

• What the Prichard Committee for Academic Excellence just told us:

“An audience of 225 state education department officials, policymakers, college professors, and leaders of statewide education organizations got a first-hand look at the new wave of classroom teaching and learning strategies on Tuesday (June 14) at a showcase in Louisville. Funded by the Bill and Melinda Gates Foundation and organized by the Prichard Committee for Academic Excellence, the event emphasized an approach to math that puts students in the center of problem solving and language arts assignments designed to require deeper thinking and stronger writing in English, science and social studies classes.”

Supposedly, our schools have been using student-centered, higher order thinking approaches for two decades. Those approaches haven’t worked well. Why does Prichard think they are on to something new?