We wrote quite a bit about this and applauded the mayor for fighting for spending cuts BUT this should be viewed as just the first step. There are many other financial issues that must be tackled so that Lexington can get on solid footing for the future. Public pension reform, privatizing city owned golf courses, etc… The list goes on and on…

I encourage all Lexingtonians to contact their council member and urge them to not rest now, to keep fighting for reductions in wasteful spending!

What does ‘free market’ mean?

The Bluegrass Institute is a free market think tank. But what does “free market” mean?

In a new page entitled “Free market” on FreedomKentucky.org, Bluegrass Institute intern Brian Deignan does a great job of giving Kentuckians an introduction to some important components of freedom in the marketplace.

“In a free market, individuals or individual entities seek to exchange with others free from the threat of coercion,” Deignan writes.

He points out the importance of “voluntary exchanges,” which are “net-beneficial in nature, meaning both parties in a transaction expect to receive more in benefits than the costs incurred to them by giving up some of their property for some other property or service.”

Deignan explains the importance of coordination — but not on the part of some government bureaucrat.

Rather, explains, “in a free market individuals coordinate their market activity with that of others. This result is of no conscious intention of any market participant; instead, it is the workings of a functioning price system. The spontaneous coordination of all market participants reveals the cooperative nature of the free market, which usually relies on competition.”

A vivid example of Deignan’s point about competition is found in the great 1958 essay entitled simply “I, Pencil.” It’s one of the greatest statements on how the free market works.

Not every superintendent evaluation seems off the mark

This time, we think a local board may have got it right when its board chair Joe Meadows said:

“We, as a board feel that our superintendent has performed his job admirably and we are satisfied with his performance.”

• Harlan Independent ranks in an impressive ninth place for ACT Composite Scores from the 2010 testing of all 11th grade students in Kentucky.

• The district’s eighth grade students did almost as well, coming in at 14th place among Kentucky’s 174 school districts.

As a note, Harlan is a very small school system, enrolling only 818 students. That is virtually identical to enrollment in Caverna Independent Schools, which we blogged about a few days ago.

However, Caverna’s board clearly inflated their evaluation of their superintendent, giving him a perfect score on his evaluation even though Caverna ranks 164 for ACT Scores in 2010.

Let’s see, inflated evaluations and salary for much poorer performance.

This broken system is extremely unfair. Anyone who would read the two superintendent evaluations discussed here would think that it was Caverna, not Harlan Independent, which has the superior superintendent. The ACT test results tell us the exact opposite is actually true.

This broken system is also unfair to taxpayers, who are not getting trustworthy information about how their local school leaders are really performing.

Pension reform is not necessary?

At least according to Gov. Steve Beshear…

He seems remarkably calm about an issue that is actually very serious. We do need pension reform. 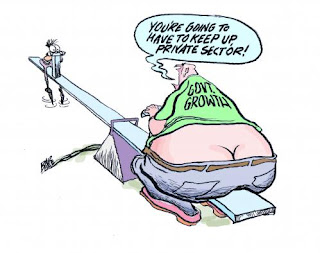 A new report from the Kentucky Center for Economic Policy (KCEP) claims that, if successful, the momentum within the Kentucky legislature to repeal the corporate income tax would result in “little to no impact on location and investment decisions” of large businesses. KCEP claims that a tax decrease would only enable existing and potentially new Kentucky businesses “to avoid responsibility for helping pay for public services from which they benefit.”

However, the general consensus in the academic literature confirms what common sense tells us: taxes affect incentives, and incentives affect decisions, especially those of job-creating businesses.

If a business can find better bang for its investment dollar in a neighboring region (say, in Tennessee where corporate income taxes are 1.7% lower than in Kentucky), then it will relocate to greener pastures.

According to a review of numerous economic indexes done by Cathy Carey, Ph.D. economist at Western Kentucky University, “The states that grow the fastest, both in population and in GSP (gross state product), and in payroll employment and GSP, tend to have more favorable business climates, including tax structures and lower corporate tax rates.”

KCEP’s call for Kentucky to “eliminate loopholes in its corporate tax and more closely scrutinize credits, subsidies and other tax breaks” would only increase the tax burden on businesses considering an investment in Kentucky, further impoverishing the state.

The unfounded implication of the KCEP study is that government is able to make more wise and efficient decisions with business profits than can private industry.

As the data (and common sense) would have it, lowering the corporate income tax in Kentucky would be a welcome invitation for new business, leading to new jobs and greater prosperity.

This is a great argument for increased transparency in the education system as well as reason to question and verify state released scores for standardized tests.