Apparently, a new federally sponsored student concludes the answer is: NO, at least for seventh grade mathematics teachers.

The study was conducted by the American Institutes for Research and the MRDC organization.

“The focus of the training was to better prepare teachers to cover rational number topics, such as fractions, decimals, percent, ratio, and proportion, which are seen as an important foundation for learning algebra but also a common stumbling block for students.”

And, the PD program selected was supposed to be based on all the collective research on what works best.

So, the fact that the training failed to improve either teacher knowledge or student performance is especially troubling.

Clearly, this offers another example to support our long-raised concerns about the quality of research in education (such as in this blog).

It also raises concerns about the ability educators to even know what works.

Ironically, the new study indicates that recent cutting of funding for PD in Kentucky might not have been such a bad idea. If PD isn’t effective, we’d just have been wasting our money.

While Kentucky doesn’t even have a formal process to follow for revoking teaching certificates for poor performance and firing a teacher is a long and drawn out affair, in Washington, DC, they are getting serious about getting low-performing teachers out of the classroom.

The Washington Post reports that more than 200 teachers were just fired for poor performance in the classroom.

Apparently, the DC school system doesn’t have the same restriction on such action that is found in most states’ teacher tenure laws. Evaluation systems in the nation’s capital are exempt from collective bargaining.

It will be interesting to see how this action plays out in the chronically under-performing DC classrooms.

Government is Not Society 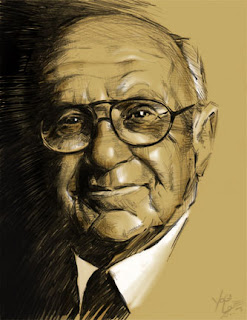 Those committing this all-too-common flaw in reasoning imply that if there’s something wrong in society then government intervention is the only possible solution. The heroic leap in logic is obvious when isolated, but still smuggled into all manner of political debate.

No one understood the difference between the coercion of government intervention and voluntary social cooperation better than Milton Friedman:

The fundamental principal of the free society is voluntary cooperation. The economic market, buying and selling, is one example. But it’s only one example. Voluntary cooperation is far broader than that. To take an example that at first sight seems about as far away as you can get — the language we speak; the words we use; the complex structure of our grammar; no government bureau designed that. It arose out of the voluntary interactions of people seeking to communicate with one another. (Free to Choose, Part 1)

Why must the lack of healthcare for the indigent necessitate government intervention? What about market solutions, like easing AMA-enforced restrictions on the entry of new physicians into the healthcare profession? What about other purely voluntary solutions, like through the charitable giving of religious or ethnic institutions? Sadly, after decades of the Great Society crowding out this sort of voluntary cooperation, the common view prevails that it’s not my responsibility to look out for my neighbor — it’s the government’s!

To find sustainable solutions to these genuine societal ills, we must learn from great thinkers like Milton Friedman — we must take more individual responsibility for ourselves and our neighbors, and remember that there’s a whole lot more to society than the government.

Milton Friedman’s message will be heeded loud and clear at Freidman Day, July 29th, at the University of Louisville. Click here to RSVP.

Author of “An Unsustainable Path: The Past and Future of Kentucky Medicaid Spending” and Bluegrass Institute adjunct scholar Dr. John Garen published an op-ed in the Lexington Herald-Leader. The piece discusses the need for Medicaid Reform. You can read the op-ed here.

You can also read/download the full text of “An Unsustainable Path” for more information about Kentucky’s Medicaid plight.

Taking liberty to the airwaves: BIPPS on 84WHAS

Jim Waters, Bluegrass Institute vice president of policy and communications, will be empowering Kentuckians to take back their freedoms on The Mandy Connell Show on 84WHAS, today at 10 a.m.(EDT)

Waters appears on Connell’s show, which airs weekdays from 9 a.m. to Noon (EDT), every other Monday.

Listen live to the show here.

Kathy Gornik, president of Lexington-based THIEL Loudspeakers and chairman of the Bluegrass Institute Board of Directors, addresses the debt-ceiling controversy Monday on KET’s Kentucky Tonight at 8 p.m. (EDT)