Bill Gates on his decade of involvement with school reform

In a recent Wall Street Journal interview Gates admits laments that his first major foray into school reform – the creation of small enrollment high schools – didn’t make much of a difference where it counted with greater numbers of students going on to college.

“The reality is that the Gates Foundation met the same resistance that other sizeable philanthropic efforts have encountered while trying to transform dysfunctional urban school systems run by powerful labor unions and a top-down government monopoly provider.”

Part of Gates’ problem may be the advice he’s been getting. For more on that, click the “Read more” link.

Gates isn’t the first well-meaning philanthropist to run upon the rocks and shoals of public education reform. Other philanthropic efforts, like ones from Ford Foundation, Carnegie Foundation and more recently the Annenberg Foundation are now largely history. None made much of a dent in the achievement gaps they hoped to reduce or eliminate.

It remains to be seen if Gates will get it right with his newest efforts. One potential winner: he reportedly favors charter schools.

However another Gates effort, running in conjunction with the Prichard Committee for Academic Excellence here in Kentucky, looks pretty “iffy.” This one is an attempt to push student-centered learning into more classrooms.

It has a hollow sound.

Because Kentucky has been trying to do exactly that since the enactment of KERA.

I bet no one told Gates that his supposedly new effort is actually old news – tried years ago right after KERA got going – and to date it hasn’t really moved the performance dial that much.

Maybe someone recently came up with a way to do student-centered learning better, but it seems to me that shaping learning only around what interests a child will simply insure many children won’t learn a lot of things they need to know. The real key isn’t appealing to a child’s desires; it is knowing how to fire kids up to want to learn things that initially might be unknown to them or which might not be terribly appealing. That’s not student-centered, but it is what is needed if kids are really going to become college and career ready by the end of high school.

In any event, Gates isn’t quitting education – yet.

However, as he seems to admit to the Wall Street Journal, so far he isn’t getting much bang for his many bucks, either.

Maybe someone who knows Gates should suggest making a donation to the Bluegrass Institute. We do have some ideas to improve education, and we promise we won’t just dust off some old idea that didn’t work out in the early days of KERA.

Free to Choose, Part 4
These are some poignant words to keep in mind as the government spending controversy comes to a head.
Come celebrate Milton Friedman’s legacy of freedom at the University of Louisville Belknap Campus, July 29th at 8 AM. Click here to RSVP for Friedman Day 2011!

Click here to watch last week’s show on the issue. Panelists included Kathy Gornik, chairman of the Bluegrass Institute board of directors.

Here is a NY Times/David Brooks Op-Ed that is well worth your time to read if you care at all about certain elements in the public school system who would mislead us about the need for real reform. 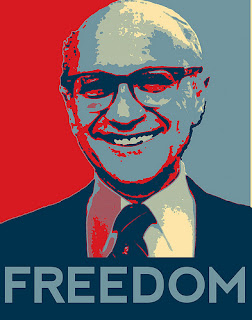 “Increasingly, schools have come under the control of centralized administration, professional educators deciding what shall be taught, who shall do the teaching, and even what children shall go to what school. The people who lose most from this system are the poor and the disadvantaged in the large cities. They are simply stuck. They have no alternative.”

Free to Choose, Part 6
Come celebrate Milton Friedman’s legacy of freedom at the University of Louisville Belknap Campus, July 29th at 8 AM. Click here to RSVP for Friedman Day 2011!

We’ve been fans of the Barren Academy of Virtual and Expanded Learning (BAVEL) ever since issuing our report last year about “Virtual schooling in Kentucky: Great promise with challenges.”

This new partnership could allow BAVEL to expand the grades it can serve to include middle schools and to offer many more courses to high school students. Pearson indicates its virtual offerings in partnership with the Florida Virtual Schools now include 100 different courses.

BAVEL students take all courses on line and can do so 24 hours a day, 7 days a week, 365 days a year. This incredible flexibility meets needs of a wide-ranging group of students who are in danger of dropping out due to having to work or being confined due to medical reasons, or who just are not thriving in a standard classroom setting.

BAVEL students actually do a district-to-district transfer into the Barren County Public School District even though they don’t change their living place.

“Over 95 students have graduated from BAVEL with over 100 students enrolled this past school year alone from among more than 20 Kentucky public school districts.”

BIPPS’ own Holly Carter reports she took courses from Florida Virtual Schools a number of years ago, and they were high quality. So, the program at BAVEL, already good, are about to get even better.