Quote of the day: Coal vs. government

“The coal industry has done a lot more for Eastern Kentucky than the state has.” –Dennis Adams of Prestonsburg, in a Lexington Herald-Leader letter to the editor. Read the entire letter here.

Phil Moffett, the Bluegrass Institute’s new president and CEO, will be on the “Kruser and Krew” show on Newstalk 590 WVLK-AM/FM at 1 p.m. (EDT) today.

Moffett will be talking about the institute’s exciting future as it builds alliances with the business community and tea parties and other liberty groups across the commonwealth to advance freedom, defend liberty and build a more prosperous Kentucky.

“Kruser and Krew” is hosted by Dave Krusenklaus and is broadcast weekdays from Noon to 3 p.m. EDT.

Video: Phil Moffett steps up to lead the Bluegrass Institute

The Kentucky Department of Education (KDE) finally released high school graduation rate data today, and it will take some time to go over all of it. However, a first look at the new data, which for the first time has the KDE using a much more accurate calculation developed by the US Department of Education, raises some questions.

For one thing, last year Kentuckians were told our high school graduation rate in 2008-09 was 83.91 percent. Using the new formula, the KDE now more accurately reports the real rate was only 75.11 percent, 8.80 points lower.

It looks like the new calculations from the KDE agree fairly well with those from the US Department of Education for 2007-08. The feds say Kentucky had a graduation rate of 74.4 percent while the KDE calculated 74.99 percent, little more than a half a point higher.

So, here is the full set of graduation rates for the nation and Kentucky calculated by the feds since KERA began plus the new data for 2009 and 2010 from the KDE. 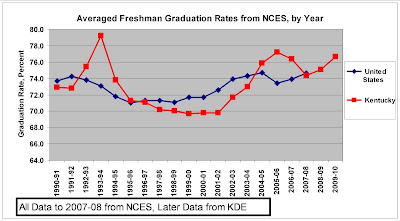 First note the new KDE data shows an increase in graduation rates over the past two years, which reverses a trend of decline from the previous two years. That change in trends may or may not be accurate. We’ll have to wait a year or two for the feds to do their own calculations to be sure.

Finally, even if the very latest data from KDE is correct, note that we still are not seeing rates better than some posted in the early days of KERA. So far, all we have done is to regain lost ground over the past two decades.

Take a look at some recent articles related to today’s announcement that Phil Moffett has joined the Bluegrass Institute as president and CEO!

Recently the Bluegrass Institute published “An Unsustainable Path: The Past and Future of Kentucky Medicaid Spending“. The video below is from the release of the report. Author John Garen provides an overview of his findings.