The Bluegrass Institute is always being asked if we have any idea how private school students in Kentucky perform academically.

The answer is, yes, we do have some information. And, that information just got a new update.

And, it shows that private and home school students in Kentucky are doing a really good job.

The ACT college entrance test scores for the graduating class of 2011 were released earlier today, and I’ll be doing a lot of analysis of this very important information.

A few hours ago, I also got a copy of the Kentucky Department of Education’s news release 11-067, which includes ACT scores for graduating public schools students only. Earlier, I obtained the overall average scores for all Kentucky graduates, public, private and home schools combined, from the ACT Profile Summary Report for Kentucky for 2011.

That allows me to do a little algebra to compute how many non-public school students graduated in Kentucky in 2011 and how they did as a group on the ACT.

Here are three tables that tell the tale from 1993 to the present.

The first one presents overall results for all students combined. These are scores directly released by the ACT, Incorporated in its reports. 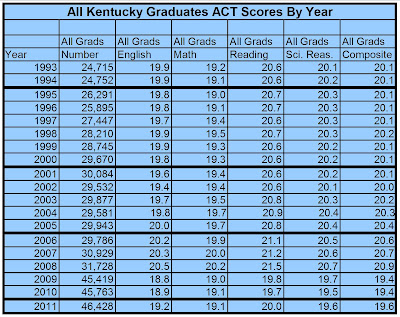 Notice that the overall scores for Kentucky dropped notably in 2009, which is the first year the state tested all students with the ACT. That added about 25 percent of our graduates who had not previously chosen to take the ACT when it was optional, and taken at student cost.

This next table covers public high school students’ performance in Kentucky. These scores come from the Kentucky Department of Education’s news release. 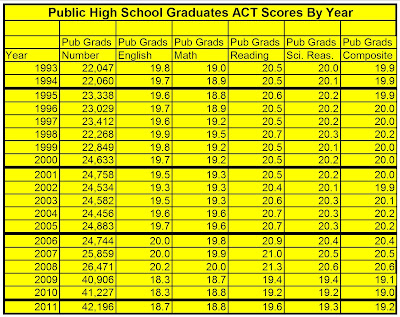 Finally, this last table covers the performance of the non-public school students. I had to calculate these figures. 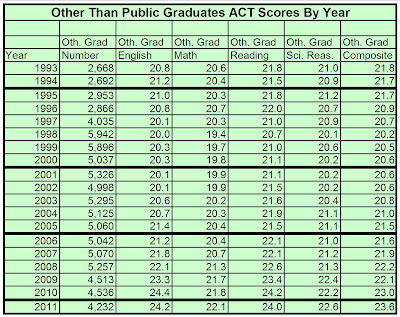 There are some very important things to consider here.

Second, the number of non-public school students tested dropped slightly from 2010 but still represents nearly a tenth of all the students in the state. That is enough for private and home school graduates to make a notable difference in the all-student scores in the first, blue-shaded table above.

I suspect the private school drop is related to the economic situation.

Next, Kentucky’s non-public students notably outscore our public school students, and the gap has been growing recently.

For this year’s graduates, the public to private/home school gap enlarged further to 4.4 points.

Thus, in 2009, private school graduates pulled up the public school ACT Composite of 19.1 to an overall average score of 19.4, a difference of 0.3 point.

So, in evaluating only overall scores for Kentucky, it is important to keep in mind that they reflect an important contribution from Kentucky’s non-public school graduates.

When we look at the trend in scores only for Kentucky public school graduates since we adopted 100 percent ACT testing, we have only improved performance by the minimum amount detectable, 0.1 point.

Still, the trend is starting to go in the right direction. This offers hope for the future even though Kentucky clearly has a very long way to go and really needs to look at what is happening in a key charter school state, Louisiana, which I blogged about earlier today.

The new ACT results are out, and I already posted a blog earlier today with the news that Kentucky did edge up slightly in ranking among those states where ACT testing is essentially universal.

But, a really big story concerns how Kentucky stacked up against hurricane-racked schools in Louisiana. Louisiana rebuilt its post-Katrina school system largely by harnessing the power and flexibility of charter schools to move out much more quickly than traditional, regulation- and union-constrained public schools could ever accomplish.

Here is our comparison graph again of states where ACT testing is virtually or totally universal.

Note that Louisiana, one of the nation’s strongest charter school states, and also a Southern state, outscored Kentucky by 0.6 point for the 2011 high school graduates’ ACT Composite Score. Here is a further breakdown of ACT Composite Scores by race for the two states:

In particular, notice that blacks in Louisiana outscored Kentucky’s blacks by a full point on the ACT Composite Score. That is a notable difference.

However, the white situation is much more dramatic. Kentucky’s whites languished behind whites from Louisiana by a whopping 1.6 points! That is a very dramatic difference in state-to-state comparisons.

Keep in mind, both states tested all of their graduates, so these comparisons are quite appropriate.

When you consider the challenges Louisiana has faced, this is clearly rather remarkable performance – for them. Good job, Louisiana!

The situation shows that Kentucky could make stronger educational gains, faster, if it would finally establish a good charter school program.

At a press conference today in Nicholasville, Kentucky and in their web sites, the ACT, Incorporated and the Kentucky Department of Education (KDE) posted data listing the combined average performance of all students in the state, both public and private.

The reports show among those states that test all, or virtually all, students with the ACT college entrance test, that Kentucky improved its position by one place in the rankings, swapping places with Tennessee (See graph below; click on it to enlarge).

Still, in a fair comparison of states where testing percentages are virtually identical, it is clear that Kentucky has a long way to go to match top-performers like Illinois and Colorado, which pioneered the policy of testing all their students with the ACT a decade ago. In 2011, those states posted ACT Composite Scores for all their public and private school students of 20.9 and 20.7, respectively. Kentucky scored more than a point lower at 19.6, a very notable difference.

For example, in Kentucky, only 28 percent of the graduates met the ACT College Benchmark score that signaled adequate preparation for a college math course in algebra. In Illinois, 42 percent were prepared to take that same college algebra course.

It is important to note that ACT performance in Kentucky cannot be validly compared to performance in most other states because those states do not conduct universal testing with this assessment (UK Center on Business and Economic Research, are you listening?).

In most states, students voluntarily take the test, so the ACT results do not represent a valid random sample and therefore cannot be reasonably compared to states where testing is universal.

There is a lot more to discuss from the results of this very important testing program, so stay tuned.

Meanwhile, you can find some of the 2011 reports from the ACT, Incorporated here.

Keep in mind, the reports released by ACT, Incorporated cover overall averages in each state for all students, public and private. We’ll talk about public school only performance in Kentucky in a later blog.

Next month, the Obama Administration will begin granting waivers to states that are not on track to meet proficiency requirements in the No Child Left Behind Act. Education Secretary Arne Duncan will be granting these waivers selectively, based mostly on states’ willingness to abide by new executive branch mandates not included in NCLB, likely including adopting national curriculum standards.

Duncan has the authority under NCLB to grant waivers, but not to compel states to jump through administration hoops in order to earn them, as Neal McCluskey has documented clearly.

We’ve broken any semblance of a Constitutional balance of power between the executive and the legislative branch. Now the President is just going to dictate to every school what they’re going to teach. And that is a giant threat to freedom and to the American education system.

A broader recognition that the Constitution grants neither Congress nor the President any role in education would go a long way toward fixing these problems. NCLB may be, to quote Arne Duncan, “a slow-motion train wreck,” but using that law to transfer power away from parents, states and Congress is easily a solution worse than the problem.

And, they learned about it in a timely manner, too

WNYC in New York City reports that the charter schools in the Big Apple outperformed regular public schools, once again – mostly in math this time – in the past school term even as the State of New York increased the rigor of its assessment program.

Meanwhile, we have a lot of schools in Louisville where hardly any kids learn much math. Wouldn’t it be great if we could offer parents in Louisville the same school choice options that are now routinely available to similar parents in New York City?

Also, wouldn’t it be great if Kentucky already had its school testing results for 2011?

How come a huge education complex like New York’s already has its assessment results back when a much smaller operation like Kentucky’s is still waiting, maybe for another month or more, to get our school test scores back?

Schools are starting up across Kentucky in the next week or so, but our teachers still don’t know if what they taught last year was effective. Kentucky’s teachers had to shoot blind, or with reliance only on locally funded supplemental testing, to create this year’s education plan while teachers in New York were able to benefit from additional information on performance that their state assessments provide.

Teachers’ union protest in Washington is a flop

Back on July 30, 2011, the country’s two main teachers unions and a group called Save Our Schools (SOS) held a rally in Washington, DC to push back against badly needed pressure being put on schools across the nation to improve their performance.

The SOS group expected a 5,000 to 10,000 person turnout, a trivial drop in the bucket when you talk DC rallies. That is especially true when you consider the latest data in the 2010 Digest of Education Statistics shows in 2008 there were 3.2 million school teachers in the United States.

According to Education Week, only around 3,000 actually attended the SOS rally. That’s just 0.09 percent of the nation’s teachers who were excited enough by this event to show up.

In fact, the 2010 Digest of Education Statistics shows that in 2008 there were more than 5,000 teachers just in Washington, DC alone.

Of course, the SOS march in DC was spotted for what it was even before it happened.

Groups like the Association of American Educators (AAE) and the Washington-based Center for Education Reform denounced the rally and claimed that the teachers involved didn’t want the American education system to progress.

Certainly, the lackluster turnout for this highly touted union event hints that it’s the union itself and its status quo policies that many of our nation’s more forward-looking teachers want to be saved from.