This is a helpful transparency tool! It would be ideal if the city would be proactive and post this information on its own website.

Check it out here!

The National Education Association awarded Gov. Beshear with its 2011 America’s Greatest Education Governor Award. But was this award for supporting teachers unions or outstanding achievement in Kentucky’s education performance?

Oops. A spin error not acknowledged in the NEA’s statement is that Beshear’s attempt to raise the dropout age to 18 — based on an emotional but fact-less appeal — didn’t even pass the legislature.

But he did stand steadfast to protect the status quo approaches that are failing Kentucky’s students across the state and ranking in the bottom half nationally.

The education spin is great, but the real results are terrible:

–Kentucky’s proficiency rates are in shambles and in question.

–Kentucky graduation rates are also in question. Heck, after all these years, we’re still being told that an accurate count cannot be obtained until 2012.

Just how important is it to improve the system and increase real graduation rates if it is not important enough to find a way to count who drops out? Current rates have been delayed so it should be interesting to see if this is to allow time to get the spin game polished for more bad news.

-The governor’s support for Kentucky’s ploy to spin site-based councils as the same as charter schools in the Race-to-the-Top applications sank like a rock, costing Kentucky $200 million in federal education-stimulus funding. In fact, he should have earned a spot in the Pinocchio Hall of Fame for that one.

When you get past the press-release spin, it would be incredulous to believe that Beshear earned the award based on Kentucky’s education results.

But no one questions his relentless support for the teachers union and not upsetting the existing power structure in support of educators – not kids.

Mirror, mirror on the wall, who’s the greatest educator governor of all?

The latest round of inflation in superintendent evaluations continues with the Caverna Independent School Board providing “high marks” to their superintendent.

According to the Glasgow Daily Times:

The article says the superintendent got a “good” mark for the student achievement/learning area.

The latest available 11th Grade ACT Composite Score for Caverna is from 2010. It was a dismal 16.1, WAY below the statewide average of 18.5.

With that score, Caverna ranks WAY DOWN at 164 out of the 169 school districts in Kentucky that have high schools.

Now, how is that again about “good” student achievement/learning?

This board must be looking at something, but it clearly isn’t whether Caverna is getting its students ready for college and careers.

By the way, Caverna pays its superintendent $107,188.00 according to the latest, 2010-2011 data from the Kentucky Department of Education. That ranks 108 out of the 171 districts in the state that had salary reports in the department’s Excel file. However, tiny Caverna only enrolled 761 students in that school year. That should be well below what I calculate to be the state average of around 3,700 students per district.

Medicaid is on an unsustainable path towards fiscal disaster, putting Kentucky’s most vulnerable citizens at risk. Today, two out of three children on Medicaid are denied appointments with specialists, compared to only one in 10 privately-insured children.

Without essential, sweeping reform, Medicaid will continue wasting Kentucky’s resources on a grossly over-expanded enrollee base while failing in its fundamental mission of providing access to health care for our neediest citizens.

Stands up for fiscal responsibility in tough economic times

We have been following the budget process in Lexington for the past couple of weeks. Today, mayor Jim Gray stood by his belief that the city should not make its financial situation worse by allocating funds for new frisbee golf courses, lacrosse fields and hiring more employees onto the city payroll.

According to Kentucky.com, using his line item veto power, Gray rejected $889,612 in spending increases  recommended by the city council. The council can still override the veto if nine of the 15 members vote in favor of the budget.

Contact your Lexington city council member and tell them how you feel about wasteful spending in tough economic times. 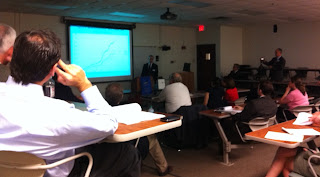 This week, Dr. John Garen and the Bluegrass Institute presented “An Sustainable Path: The Past and Future of Kentucky Medicaid Spending” to a packed room at the University of Kentucky.

From the executive summary:

Kentucky Medicaid is on an unsustainable path. Its expansive spending growth over the past 25 years has put increased pressure on state and federal budgets. Medicaid has failed to fulfill the goal of improved health for most of its recipients…Kentucky and the nation deserve much better regarding serving the taxpayers and in crafting a program that assists the truly needy.

You can read/download the full report here!