Taking liberty to the airwaves: BIPPS on 84WHAS

Jim Waters, Bluegrass Institute vice president of policy and communications, will be empowering Kentuckians to take back their freedoms on The Mandy Connell Show on 84WHAS, today at 10 a.m.(EDT)

Waters appears on Connell’s show, which airs weekdays from 9 a.m. to Noon (EDT), every other Monday.

Listen live to the show here.

Kathy Gornik, president of Lexington-based THIEL Loudspeakers and chairman of the Bluegrass Institute Board of Directors, addresses the debt-ceiling controversy Monday on KET’s Kentucky Tonight at 8 p.m. (EDT) 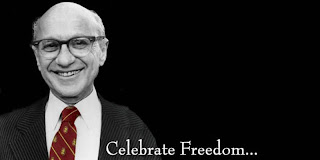 “Sometimes the market looks like chaos, and so it is. But underneath it is highly organized by the impersonal forces of a free marketplace.”

Free to Choose, Part 1
Come celebrate Milton Friedman’s legacy of freedom at the University of Louisville Belknap Campus, July 29th at 8 AM. Click here to RSVP for Friedman Day 2011!

Fifteen years and billions of dollars later, legislation has been proposed that would “eliminate agriculture direct payments subsidies completely and permanently.”

When these direct payments to farmers began in 1996, they were meant “to serve as a temporary transitional handout to farmers as they moved in a more market-oriented direction.”

But good intentions do not a temporary government program make.

The direct payments program has cost taxpayers $41 billion since Congress made it permanent in 2002.

According to the Congressional Budget Office, eliminating these subsidies would save $28 billion over the next decade.

Taking a cue from other large cities like New York and San Diego, Kentucky Senate President/Candidate for Governor David Williams is calling for a shut down of the Jefferson County Board of Education and transfer of power over schools to the mayor of Louisville.

It’s a dramatic proposal, but something better needs to happen in the Louisville school system, where a huge proportion of the state’s lowest performing schools are found and where dropouts and poor academic performance are an everyday fact of life.

Jefferson County is overloaded with some of the poorest performing schools in Kentucky. Kentucky Department of Education (KDE) reports show that 13 of the state’s current total of 22 Persistently Low-Achieving Schools – 59 percent – are found in Jefferson County. 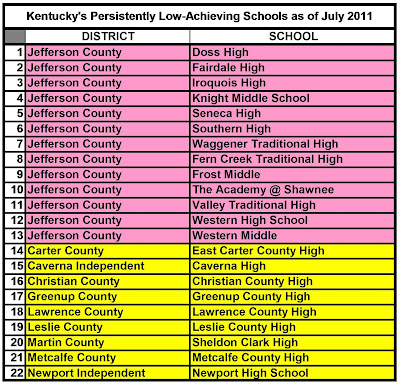 That is way out of line with the district’s share of all the students in Kentucky’s public school system. An annual KDE report on Growth Factor/Ethnic Membership in all school districts shows Jefferson County’s 2010-11 school year fall membership included 95,176 students, while statewide the total number of students was 654,997. Thus, while this lone district has only 14.5 percent of the state’s students, it has 59 percent of the state’s highest problem schools.

There are many other problems in this troubled school system, such as low high school graduation rates, especially for children of color, and poor academic performance in other schools besides the Persistently Low-Achievers. We cover that information in our reports on “How Blacks and Whites Perform in Jefferson County” and “Examining Kentucky’s ‘No Child Left Behind’ Tier 5 Schools” and in our long-running series in this blog (just search on the term “busing” to find) about the deplorable school bus plan in the district. That busing plan, which is now hugely controversial in Louisville, routinely and unnecessarily forces five-year-olds on bus rides over an hour, one way, with multiple bus exchanges enroute.

Clearly, something is going very wrong in Jefferson County for a very significant number of the district’s students.

Meanwhile, when asked about the Williams proposal, Kentucky Governor Steve Beshear said, “Kentucky’s local school systems have worked well for years with locally-elected boards of education, directly responsible to the people of that area.”

Clearly, the governor must be uninformed about what is really happening in Jefferson County.

Also lost in the governor’s comment is the fact that Kentucky has a history under KERA of moving in when local school districts don’t do their jobs well.

KERA itself was aimed in no small measure at low-performing school districts in Eastern Kentucky that had become virtual family fiefdoms – places where patronage was far more important than the education of children. Under KERA, those school districts had all sorts of power taken away by people who lived much farther away from them than David Williams does from Jefferson County.

You see, while local control is often a good thing, when something is really wrong, where you live has nothing to do with whether or not you are able to understand the issues and have a desire to make things better.

Nice commentary on teachers who cheat

Reason Online makes some good points in this article about teachers making excuses for cheating to hide problems with status quo education.