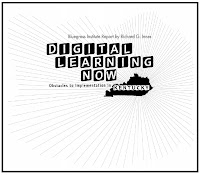 Here is the link to the radio report, which has several audio clips from an interview with Richard Innes about the Barren Academy for Virtual and Expanded Learning program.

WCPO-TV Channel 9 in Cincinnati provides this from our Digital Learning Now!: Obstacles to Implementation in Kentucky press conference.

Croyle does a great job covering what we said about the Barren Academy of Virtual and Expanded Learning and some of the great digital learning opportunities that are coming on line in regular Kentucky schools.

Those opportunities are definitely found in our host for today, the Conner High School in Boone County and its newly refurbished and reequipped library/media center.

Educators, press and activists gather to hear about digital learning

Earlier today a press conference was held in the media center of Boone County’s Conner High School to mark the release of Digital Learning Now!: Obstacles to implementation in Kentucky.

The report outlines a set of Kentucky-specific recommendations regarding the enhancement of digital learning in our schools.
There was a lot of excitement about the future of digital learning in Kentucky and its potential as well as much discussion about the obstacles to effectively implementing it.  Members of the press, education groups, educators, and citizen activists gathered to support the education of Kentucky’s children! 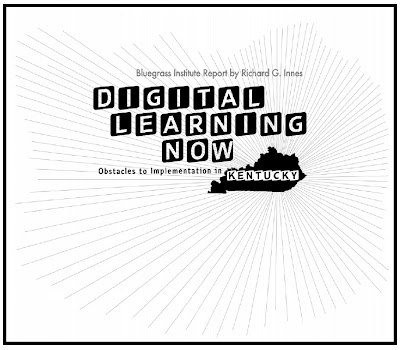 The Bluegrass Institute released a report today focusing on roadblocks to increasing digital learning in Kentucky at a press conference at Conner High School in Boone County, Kentucky.

The foundation’s report deals with digital learning issues from a nationwide perspective while the new institute report focuses on specifics in Kentucky. The national report was released in December 2010.

In addition to a presentation of the report, the press conference agenda featured comments from Kentucky Associate Commissioner of Education Dewey Hensley concerning his efforts in the Kentucky Department of Education’s Office of District 180 to turn around Kentucky’s lowest performing school systems.

The Bluegrass Institute’s “Digital Learning Now!, Obstacles to Implementation in Kentucky” is available on line now to everyone. It should prove important reading for educators, legislators, members of business and industry and the general public who are interested in education in Kentucky.

Stay tuned for more information on the press conference and the new report.

A new report from the Bluegrass Institute on the exciting potential of digital learning in Kentucky will be released to the public on Monday at a 10 a.m. news conference at the Conner High School in Boone County.

In addition to highlighting some important developments such as the Barren Academy of Virtual and Expanded Learning, Kentucky’s fully online digital learning high school, the new report consolidates concerns from Kentucky educators about roadblocks to expanded use of this powerful instructional technology.

The new report draws inspiration from the Digital Learning Now! report issued by the Foundation for Excellence in Education in December 2010. This organization, which is heavily invested in improving education in the United States, is headed by former governors Jeb Bush from Florida and Bob Wise from West Virginia. The foundation’s report has a nationwide focus, while the new Bluegrass Institute report deals with specific issues in Kentucky.

The new Bluegrass Institute report will be important reading for education policymakers as they chart the path of education in Kentucky in the 21st century.

We’ll list the link to the report in this blog on Monday right after the press conference ends.