Quote of the Day – What we don’t hear about education

“…if you’re curious about what is actually going on in American classrooms—what texts and topics are being taught, what kinds of questions teachers are asking students—you’re unlikely to find much information. And yet that’s what the public needs if we’re going to understand many of the problems that plague our education system, not to mention our society as a whole.”

And, if new, very vague social studies standards are approved for Kentucky, the situation is only going to get much worse.

The very deficient revision of Kentucky’s social studies standards will be reviewed by the legislature’s Administrative Regs Review Subcommittee tomorrow, and so far, the main stream media has said nothing about the obvious problems like omissions of key figures like Abraham Lincoln and Martin Luther King, the absence of basic content such as insuring all students know our planet has a North Pole and a South Pole and, at a very basic level and as we have previously reported, coverage of only four of the 13 major disciplines that are supposed to be included in social studies.

I know one opposed teacher, who happens to be Kentucky’s History Teacher of the Year for 2011, won’t be there due to KPREP testing in his school. He is sending comments to the committee.

I wonder if anyone else even cares. If so, the meeting is at 1pm Eastern Time in the Capitol Annex in Frankfort.

Here is a list of the committee members on the Administrative Regulation Review Subcommittee. these are hot links that provide contact information.

At the same time, de Blasio’s imposed an arbitrary cap on charter schools, which, if lifted, would result in even more poor black and Hispanic kids getting admitted to those elite high schools without lowering standards and achieving a head start on addressing the very income-inequality problem the mayor wants to tackle.

Poor minority students from the city’s well-known Success Academy network of charters are accepted to these high-performing high schools at double the rate of their peers in traditional settings.

Wouldn’t getting more poor minority children an elite education rather than lowering the bar and denying new charters be the preferred way of achieving greater equality for largely disadvantaged students?

Yes, but it’s not how twisted minds of teachers’-union bosses and their political lackeys work.

Moskowitz has tried for several years to co-locate three new charters in empty public-school space – an approach that’s previously yielded tremendous results from collaborative efforts between the traditional and charter schools’ staff members and students in both schools.

De Blasio denies her requests, meaning, as she writes, “instead of three new high-quality schools (an added 1,500 seats) the city continues to hoard half-empty buildings.”

If the mayor’s denials were based on sincere questions about charter schools’ effectiveness and he was open to genuine debate, the dynamics would be different.

Instead, it’s about a political cocktail made partly of power, partly of fear, a grab for complete control and even retribution.

Moskowitz, while chair of the New York City Council’s education committee, held a heavily covered multi-day hearing 16 years ago in which she and other witnesses exposed how union contracts imposed inane work rules on public schools and made it nearly impossible for principals to fire bad teachers.

Unions never forgave her and worked overtime to defeat her in the next election.

De Blasio demonstrates his insecurity regarding teachers’ unions by doing all he can to please them – including insisting during his 2013 mayoral campaign that Moskowitz “has to stop being tolerated, enabled, supported” – and undermining her plans for new schools.

A similar environment has created a charter-school funk in Kentucky.

Ironically, during the 2017 legislative session, the state House – under Republican control for the first time in nearly a century – passed long-fought-for bills but then abruptly deflated when it came to charter schools.

GOP leaders obstinately refused to vote on Louisville Republican Phil Moffett’s bill that would have made Kentucky one of the nation’s strongest charter-school states, caving instead to union threats that supporting truly effective legislation would result in all-out political war in the next election.

No charter schools have started here more than two years later because the impotent law that eventually passed provided no funding mechanism for them and was generally so watered down it could have ended up floating down the Kentucky River and made just as much difference.

It’s not because lawmakers don’t know that charters are effectively closing gaps and catching many poor, minority students in danger of falling through the cracks in traditional schools.

Rather, too many politicians care more about the next election than the next generation.

Kentucky students who by now could have been leaving failing schools behind and entering high-performing charters are being denied opportunities that won’t come their way again, thanks to antagonists who talk of bridging gaps and ending disparities while remaining the biggest obstacles toward the only public-education policy that’s ever done just that.

Jim Waters is president and CEO of the Bluegrass Institute for Public Policy Solutions, Kentucky’s free-market think tank. Reach him at jwaters@freedomkentucky.com and on Twitter @bipps.

The Bluegrass Institute for Public Policy Solutions released its plan for quasi-government agencies which are part of the Kentucky Retirement Systems (KRS) and which face financial ruin if action is not taken to alleviate a dramatic increase in pension payments which, unless relief is granted, must begin on July 1.

“The politicians in Frankfort are fighting over whether to allow regional state universities and quasi-governmental agencies like local health departments and rape crisis centers to leave the Kentucky Retirement System (KRS), a move that would require complex legislation and administrative changes to the state workers’ pension fund and unnecessarily cost taxpayers hundreds of millions of dollars,” Bluegrass Institute president and CEO Jim Waters said.

“The Bluegrass Institute Pension Reform Team offers a different approach that costs far less without throwing state workers or employees of the quasi-government agencies under the bus, and ensures taxpayers are protected from digging the pension hole deeper as quasi-governmental agencies continue to make needed payroll contributions to the KRS,” Waters added.

The Bluegrass Institute proposes creating the Quasi-governmental Employees Retirement System (QERS) as a separate pension plan within KRS, which would address the need for relief by these agencies while saving taxpayers a significant portion of the estimated $827 million price tag to allow the quasis to leave KRS altogether.

“Not all public retirement plans are the same,” Waters noted. “Quasi agencies have much-lower liabilities yet are forced to make disproportionately higher Annual Required Contribution (ARC) payments into the state workers’ pension system, which is teetering on the precipice of insolvency. Placing the quasis in their own plan with ARC payments based on their specific liabilities and actuarial assumptions rather than being forced to pay for the sins of the rest of the system will be their salvation.” 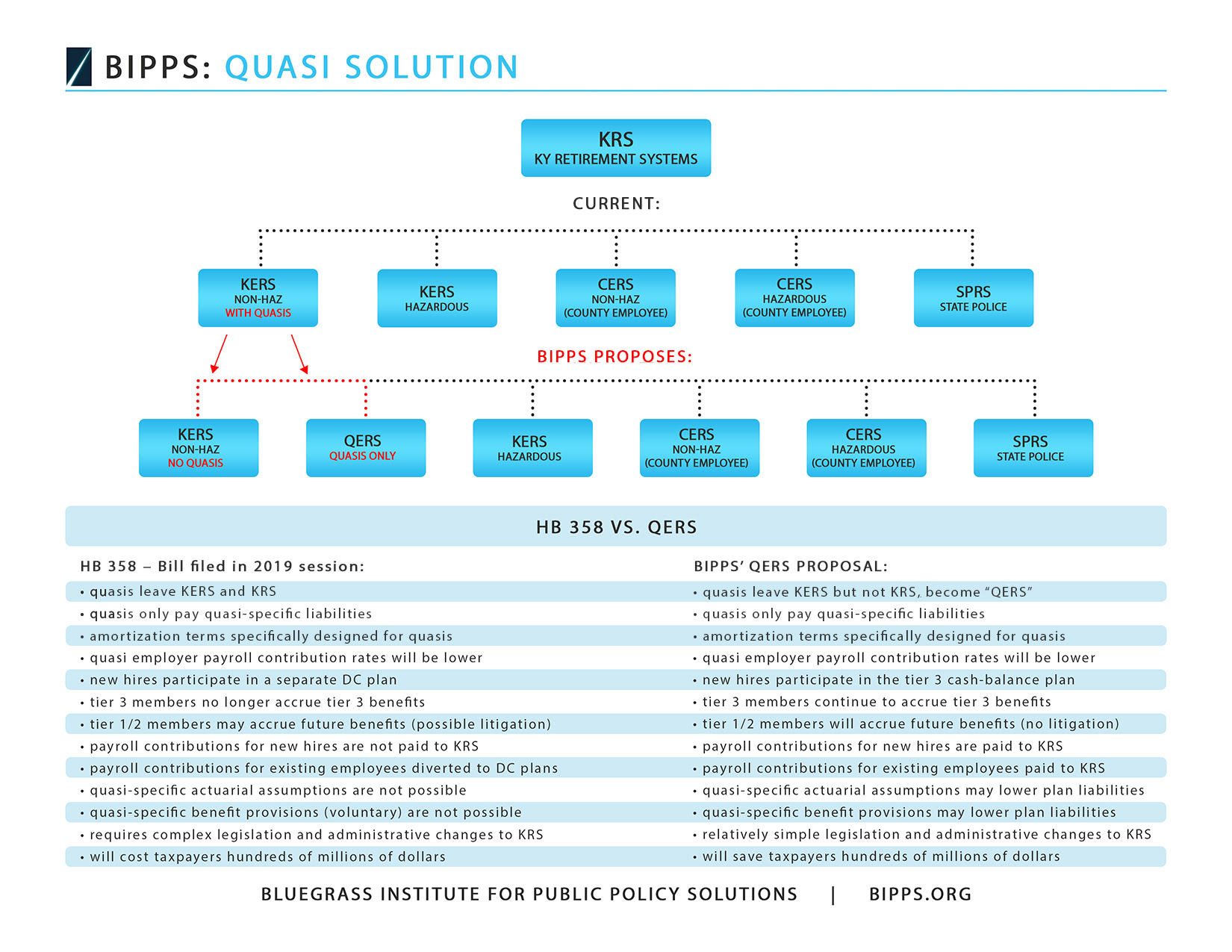 Ed Week: ‘College of Education Now Prepares Teachers in the Science of Reading’

Many more still need to update their reading programs

Education Week just released an interesting video with a professor from an Arkansas school of education and a classroom teacher who supports that college’s student teaching program. These educators only recently started to instruct student teachers properly about the initial phase of teaching reading.

The change is coming due to a recent Arkansas law, largely pushed by parents, that finally requires education schools to instruct based on what science shows works best.

With statistics like these from the National Assessment of Educational Progress (NAEP) (accessed from the NAEP Data Explorer web tool) in the table below, I suspect many Ed Schools in Kentucky need to pay attention.

Note in particular that reading problems are not restricted to those students with identified learning disabilities. Among students not specifically identified with learning disabilities, more than one in four still doesn’t read even marginally well. Overall, nearly one in three of all Kentucky students do not have even basic reading skills in the fourth grade.

Some in Kentucky are starting to listen, including Dr. Randy Poe, superintendent of the Boone County School District. He agrees that Ed School programs in the Bluegrass State need updating.

House Bill 272 from the 2019 Regular Legislative Session was an attempt to do the same thing Arkansas is doing. The bill initially had a generally focused section that would have pushed better reading programs into both our schools and college teacher preparation programs. Unfortunately, the bill got watered down to only focus on Ed school improvement and then the bill totally died in committee.

So, it looks like the Whole Language/Balanced Literacy crowd is still holding sway in Kentucky and the Bluegrass State has a considerable way to go to match what is already happening in Arkansas. And, our kids will continue to suffer until this changes.

Quote of the Day – On Ed Schools teaching reading instruction

“The way reading instruction is taught at the College level needs to change. It is so costly for school districts to retrain teachers coming out of school.”