The new CATS results positively beg comparison to the much better information we get from the EXPLORE and PLAN tests.

All Kentucky eighth and tenth grade students now take EXPLORE and PLAN, respectively. These better tests come from the highly respected organization that creates the ACT college entrance test and are closely aligned to that test. Subjects comparable to CATS include math, reading and science.

Like the ACT, EXPLORE and PLAN provide information about how many students reach “Benchmark” scores that indicate students are on track to earn passing grades in their first college courses. In addition, because the demands of better paying non-college jobs have increased, the ACT says that many employers for those better paying jobs now want exactly the same skills that are needed to succeed in college. So, the Benchmark scores are more like measures of what is needed for a decent adult life. Thus, it isn’t out of line to say that the Benchmarks can fairly be considered a real measure of proficiency. And, that opens the door to compare the percentages of students reaching EXPLORE and PLAN benchmarks to the percentages that CATS says are “Proficient” or more.

The differences in proficiency rates from 2006-07 to 2007-08 increased for all subjects, indicating that CATS scoring for middle schools got even easier this year.

First of all, notice that the differences in claimed proficiency rates for all subjects are much lower for high schools, indicating the high school CATS academic tests (known as the Kentucky Core Content Tests), while still inflated, are much better aligned with real world needs than the middle school tests.

Also notice that except for science, there was a small creep in grade inflation even in the high school CATS scores as shown by the increase in the differences in proficiency rates from 2006-07 to 2007-08.

Overall, several things are clear. CATS scoring is generally getting inflated, something we have shown previously using other tests.

For the first time since January, the Intrade prediction market today says Sen. John McCain is more likely than Sen. Barack Obama to be the next President of the United States. 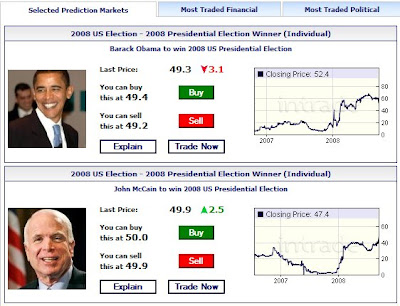 The new CATS school accountability data is out from the Kentucky Department of Education, and right away the controversy about CATS has been raised to a new level. The brouhaha jumped right out as I read Toni Konz’s first article in the Louisville Courier-Journal.

Toni reports that Jefferson County schools, “experienced a 2-point decrease in reading scores at elementary and middle schools and a 1.5-point decrease at high schools.” That’s right – a decline across the board.

Now this stands in very strong opposition to recent claims from Louisville’s “Every1Reads” program that there has been progress in reading in Kentucky’s largest school system.

What makes the discrepancy in claims more amazing is that CATS scoring became even more inflated last year.

If anything, that inflationary process should boost CATS reading scores because they are not adjusted with the now rather infamous “concordance tables” and are only reported in a format that uses the newly inflated scoring scales.

Anyway, it’s really no surprise, as Konz reports, that Jefferson County superintendent Sheldon Berman is upset, claiming, “These differences represent anomalies in the testing data that as of yet cannot be explained and raise questions about the data and how (changes in the test) may or may not have affected the outcomes.”

Welcome to the club, Dr. Berman. We don’t understand how anyone can figure out anything with such a constantly changing, ever more inflated testing system. We’ve said so for years.

We’ll have more to say on that inflation picture shortly, so keep checking back.

Well, the much-predicted state revenue crater has continued to not materialize. And the media still isn’t talking about it.

Interestingly, Lottery revenues increased 3.7% even after the KLC was forced to cut marketing expenses slightly. Maybe we should cut some more of their advertising budget.

In the face of rising revenues, once again, straightening out any budget shortfall calls for less spending rather than more revenue.

WHAS 840’s Francene Cucinello deserves a big Bluegrass Institute thank you for seeing through the CATS spin this morning. She specifically recognized Senate President David Williams for standing up to the teachers union on school assessments, calling CATS “detrimental to our children’s future.”

You got it, Francene!

Commonwealth Accountability Testing System scores are out and, if you get all your news from the Lexington Herald Leader and the Louisville Courier Journal you would never know that we are inflating our way to success with our school test scores.

In fact, you wouldn’t even know anything about the CATS’ wastefulness, fraud, or the effort to get rid of the whole mess and go legit if you depended on the big newspapers.

In fact, the big media refuses to even show up for the discussion about eliminating or at least improving CATS to better serve students.

“Most Kentucky schools on track toward goals“

Kentucky’s abysmal college remediation rate continues to be a more reliable indicator of our return-on-investment in K-12. Weak-kneed coverage like this does nothing but perpetuate the same “send us more money and we will do better” mentality in Frankfort.